In the 2012 to 2016 era, the Audi A5 was the market's most complete compact executive coupe, its credentials emphasised by a package of improvements made to the first generation model five years into its production run. Performance statistics, running costs, residual values, practicality - all of these were ruthlessly checked to improve upon standards set by rivals from Mercedes and BMW. It was a clinical approach. And not surprisingly, it produced a car that's very difficult to fault. A very strong used buy.

Efficiency. It's a very Germanic trait. And of all the Teutonic automotive brands, Audi epitomises it best. Not only in its compact hatches and business-bound saloons which have to be affordable to run, but also in sportier, more impulse-purchase models. For goodness sake, they even made an electric version of their R8 supercar. The improved first generation A5 Coupe we're looking at here didn't raise quite as many eyebrows as that in its production lifetime but it still claimed to be a shockingly efficient way to have an awful lot of driving enjoyment. This enhanced mildly facelifted version was launched at the end of 2011, four years after this car first hit the UK market. Visually, the changes on offer were slight but under the bonnet, they could hardly have been more far-reaching. All the engines on offer were either completely new or usefully revised, with the result that across the range, running costs were substantially reduced, often despite significant hikes in power. So an A5 makes sense. But that's not usually the over-riding reason for buying a coupe of this kind. Can it reward as much at the wheel as it does on the balance sheet? And is it a better used car bet than obvious arch-rivals, coupe versions of BMW's 3 Series and the Mercedes C-Class? This MK1 model sold until the second generation A5 coupe as launched in the Autumn of 2016.

You have to be very familiar indeed with the looks of an A5 Coupe to notice the differences made to this revised post-2012 first generation model. Essentially, the changes made were all about bringing the styling into line with Audi's more up to date design language, which meant a sharper-looking set of wedgy A6-style headlamps that on most UK models were surrounded by the LED strip daytime running lights fitted to S line and top of the range models. There was also a cleaner-looking single-frame front grille, as well as tweaks to the front bumper and the bonnet. The more angular tail lights were re-styled too and used brighter LED technology. But this is detail stuff. The overall aesthetic look and feel of this car didn't change with the post-2012 alterations, the interesting mixture of straight lines, sweeping curves and convex surfaces gelling into a very good looking shape indeed. It's one that looks even better in the metal, the wavy beltline that runs from the headlights back to the taillights remaining the car's most distinctive feature. It's a practical shape too, a proper four-seater, with wide doors that make it easy to get in and out of the back. Once installed in the rear, you'll find more room than in equivalent BMW 3 Series and Mercedes C-Class Coupe rivals, though the sloping roofline means that those over six foot will want to bargain for a place upfront. The 455-litre boot is also the biggest in the class, though the boot aperture could be wider. Plus it can be extended to 829-litres by pushing forward the split-folding rear seats. And behind the wheel? Well, if you're familiar with the original version of this MK1 coupe model, you'll find it as beautifully finished as ever, tailored like a sleek-fitting suit, everything being clear and elegant. With this improved model, there were revised steering wheel designs, beefier column stalks, clearer instrumentation displays, neat chrome detailing, updated buttons, smarter upholstery and classy trim inlays. The optional MMI infotainment system is also easier to use, with fewer buttons and more logical menus (you can even put in a 7-digit postcode into the sat nav). Through it, you can access a whole raft of online options, everything from Google Earth mapping to in-car internet access. 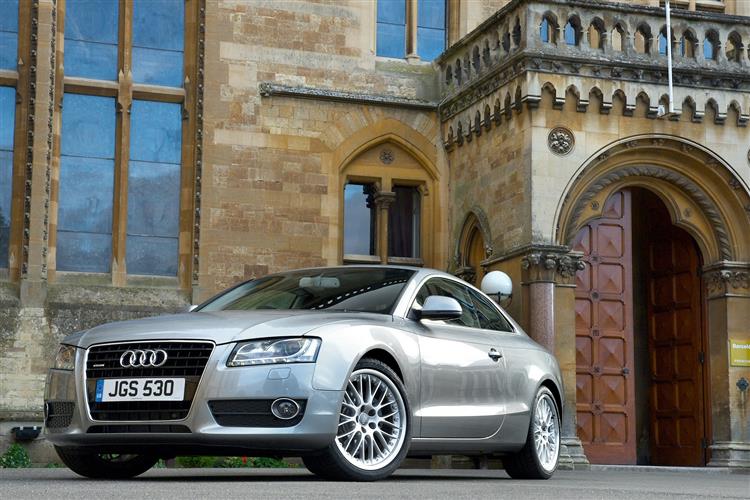