BRAVO FOR TRYING (some text hidden)

There are some cars that seem to garner a reputation that's out of all kilter with their actual worth. Some surprisingly mediocre cars go on to sell by the stackload, while on the other side of that coin, there are those vehicles that deserve to do well but which, for one reason or another, never really catch the public's imagination. Slot the second generation Fiat Bravo, built from 2007 to 2014, into that latter category. When we first drove this MK2 model Bravo, we were amazed at the quality of the cabin and the value for money. It became one of our recommended cars and although it didn't achieve anything like the sales of the Ford Focus or the Vauxhall Astra, the small number of buyers who did take the plunge seemed satisfied with their Bravos. So here's what to look for when buying used.

Remember the old Fiat Brava and Bravo twins? Probably not. In case you need reminding, Fiat decided to launch these models back in 1995, choosing to call the frumpier five-door car the 'Brava' and the go-getting three-door model the 'Bravo'. These cars replaced the Tipo which had been only a limited success in the UK. Both shared the same chassis and engines as each other, although the Bravo's styling was aimed at a younger audience. The Bravo and Brava eventually made way for the three and five-door Stilo models, again cars that punched minuscule dents in the sales figures of the Ford Focus, Vauxhall Astra and Volkswagen Golf. In 2007, Fiat got a bit more pragmatic. The UK importers knew that their Bravo wasn't going to square up head-to-head with the big hitters in the class. In order to differentiate it a little and work a profitable niche, Fiat concentrated on making the Bravo look better than anything comparable. The cars launched with a choice of 1.9-litre diesel engines or 1.4-litre petrol units. In May 2008, the Bravo got a pair of 1.6-litre Multijet diesels, in 105 or 120bhp power outputs. The old 1.9-litre diesel was replaced in February 2009 with a Euro V-compliant 2.0-litre diesel with a particulate filter that reduced CO2 emissions to 139g/km. In June 2009, Fiat announced a tie-in with MSN with the Bravo MSN Special Series, fitted with Sony Ericsson mobile phone technology, custom-made for the car, which allowed direct access to the MSN portal. Priced identically to the mechanically similar Bravo 1.4 16V Active, it also threw in the navigation and communications kit, Tempesta Grey pearlescent paint, 17-inch alloy wheels and a leather steering wheel. The MyLife trim level was added in August 2011. Based on the range's Active trim, this was paired with the MultiJet 105bhp diesel engine and featured 16-inch alloy wheels, Blue&Me entertainment and communication system, a leather steering wheel with audio controls, ESP stability control, air conditioning, electric front windows and driver, passenger and side airbags. The last Bravos were sold in late 2014 and were run-out in a sole 'Easy' trim level. Somewhat oddly, Fiat had lined up no like-for-like replacement for the car, buyers instead being steered towards the Fiat 500L and 500X models.

It's easy to forgive the Bravo any minor shortcomings when you walk round the car, taking in its beautifully integrated detailing and elegant proportions. Many five door hatches are about as beguiling as the prospect of an evening spent creosoting your mother-in-law's fence, but the Bravo is different. Just as Fiat's smart little Grande Punto added a touch of the exotic to the supermini class, this Bravo did the same for cars the next size up. If size is everything to you, the Bravo may well disappoint. Ford spent millions on making the Focus fit virtually anybody but Fiat hasn't spent that sort of budget on the Bravo and as such, it's far tighter than the Ford in the back, although there's a decent amount of luggage space in that curved rump. The interior feels very well built. Bright finish plastics lift the cabin and the controls are easy to figure out without recourse to the manual. It all looks agreeably Italianate as well, even if this is a clever facade. Fiat has really got the hang of the whole soft-touch dashboard moulding in recent years and the Bravo's supple, textured finish wouldn't look out of place in an Audi. The Bravo features two front airbags, two front side bags, two window bags and a knee airbag for the driver. ABS anti-lock braking with electronic brakeforce distribution and an ESP stability control system should prevent the worst coming to the worst. The ESP system includes functions such as anti-slip regulation (ASR) to limit wheelspin in slippery conditions and engine torque regulation which prevents the driven wheels locking up during rapid downshifts. Hydraulic brake assist boosts pedal pressure in emergency situations and there's even a hill-holder function to take the faff out of hill starts. 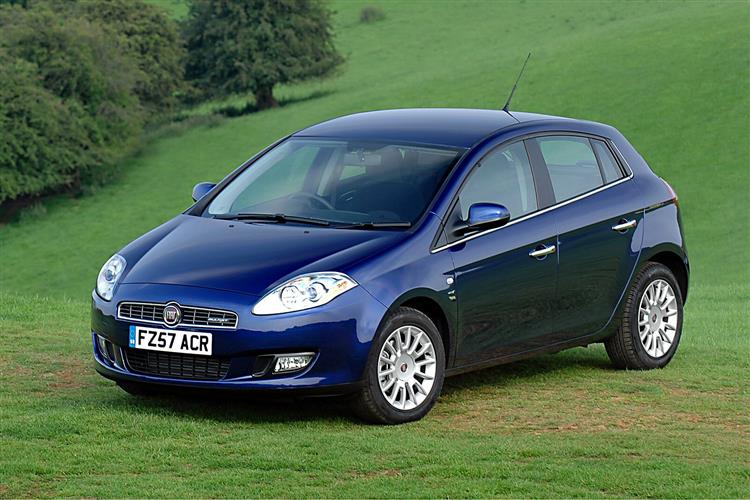