The Audi R8 is a car that needs little in the way of introduction. This mid-engined super-coupe changed the way we thought of the Ingolstadt company when it first appeared in 2006. It was a showcase that demonstrated that Audi really could build a car with class-leading chassis dynamics and styling that rivalled the boldest Italian supercars. As a result, R8s have long been popular picks on the used market, so here's what to look for when choosing one of the updated versions sold between 2013 and 2015.

Let's not forget what the Audi R8 did. For decades there hadn't really been a performance coupe that could better the Porsche 911. And then, all of a sudden there was. Few of us would have expected the deposer to come from Ingolstadt, but the 4.2-litre R8 was better to drive, sassier looking and fresher than the Porsche. It was the future and the 911 looked like the past, a notion compounded when Nissan introduced the mighty R35 GT-R. Audi introduced a V10 version in 2009 and an open-topped Spyder version in 2010, but the biggest changes to the range were announced at the China Motor Show in August 2012. The old R tronic automatic gearbox was replaced by a twin-clutch S tronic, the styling had been subtly refreshed and an R8 V10 Plus variant was introduced as the flagship model. This featured the same carbon fibre reinforced plastic used on the more potent R8 GT derivative that had been sold to help run-out the pre-facelifted model. Updated R8 models all got that GT variant's carbon fibre reinforced plastic for their front splitters, mirrors, side blades and rear diffusers, with the same lightweight material used to line the engine compartment. On the new top R8 V10 Plus derivative, the 5.2-litre V10 was uprated, producing 550PS and 540Nm of torque. This improved MK1 model R8 line-up was sold from the start of 2013 right through to 2015, when the replacement second generation R8 range was announced.

The R8 was the first production car to feature wholly LED lamps front and rear and in this improved first generation model, there are neat strip-like daytime running lights that change themselves into turn signals as you indicate. As for the changes that differentiate a V10 model from its humbler V8 counterpart, well, there aren't many. Assuming that you've missed the badgework on the wings, visual tweaks are limited to intricate Y-spoke 19-inch wheels, wider sills, enlarged air intakes and different exhausts. Plus of course there's the enormous 5.2-litre ten cylinder engine sitting under a rear transparent cover like a work of art in a display case. The V10 R8 model is impressively light (only 60kgs more than the V8 variant), with a total kerb weight that can be as little as 1,620kgs. A further 50kgs has been trimmed off that figure in the top V10 plus version. With all variants, it helps that 92% of the body and chassis is fashioned from lightweight aluminium - which is just as well in the case of the Spyder soft-top version as it has another 100kgs to carry around, this the inevitable result of fitting it with a beautifully-engineered hood that's coupe-like when raised and stows in just 19s at speeds of up to 30mph. Inside, where there's what Audi calls a 'luxury-level racing atmosphere', the interior remains an object lesson in how to package a two seat car with plenty of space, decent visibility and fantastic build quality. It's most distinguishing feature is what the stylists call the 'monoposto', a stylised large arc that encircles the driver's area of the cockpit, starting in the door and ending at the centre tunnel. Ahead of you, there's a grippy leather-covered multi-functional flat-bottomed sport steering wheel through which you can glimpse a driver information system that can display the speed digitally and offer a lap time function for track days. And bootspace? Well, your expectations won't be high and they shouldn't be. There's 100-litres of room in the front boot for a couple of squashy bags and there's also a slot behind the seats big enough, Audi says, for a couple of golf bags - but otherwise, you'll be needing to travel pretty light. 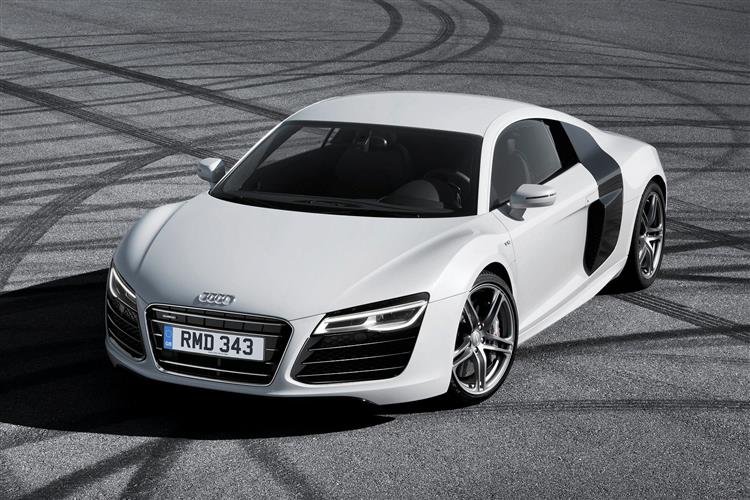