THE MAGNIFICENT SEVEN (some text hidden)

Audi isn't a company that's accustomed to playing catch-up, but when the Mercedes-Benz CLS started racking up some big sales, it was time for Ingolstadt to respond. It needed something a bit sassier than its rather staid A8 near the top of the range and the answer was the 2011 A7 Sportback. With design cues that harked back to the elegant 100 Coupe of the early 1970s, this was a big car that disguised its bulk extremely well and brought all of the refinement and depth of design that Audi has become renowned for. Nevertheless, the A7 struggled in the UK, perhaps hobbled by the fact that it looked so similar in basic profile to the cheaper A5 Sportback. Does that make it a solid used buy? Read on to find out.

The Audi A7 first appeared on the popular radar back in 2010 when production-ready examples started doing the motor show circuits, with the first road tests appearing in October of that year. Cars started rolling into dealerships at the start of 2011, Audi offering its usual trim walk-up of base, SE and S line versions. The engine choice comprised a 245bhp 3.0-litre diesel which was probably the best of the early all-V6 engine line-up. Audi also introduced a 204bhp version of this engine with a CVT gearbox which might have appealed to business users but in terms of talent was definitely one to avoid. There were also a pair of petrol engines, a smooth 204bhp 2.8-litre unit and a supercharged 298bhp 3.0-litre TFSI. Effectively a detuned version of the S4's powerplant, this one also sounded good on paper but probably needed a quicker-witted chassis to do it justice. This being Audi, it wasn't too long until even quicker versions appeared. First up was the S7, which appeared in June 2012 with a 414bhp twin-turbocharged 4.0-litre V8 under the bonnet. To give buyers some of the sportier looks without the expense, Audi also introduced the A7 Black Edition, while at the start of 2013, the ballistic 555bhp RS7 Sportback. The 309bhp 3.0-litre BiTurbo TDI engine was also introduced, instantly becoming the pick of the bunch. The A7 range got a heavy refresh for the 2014 model year with revised styling, new engines and improved dynamics.

Style and practicality are key areas where the hatchbacked A7 needed to deliver in comparison to the A6 saloon and its rivals in the wider market. It's actually very similar in size to the A6, measuring close to five meters in length and at 1.9m wide. The cabin is designed to comfortably seat four adults and the electrically powered rear hatch rises to reveal a sizeable boot that can expand to 1,390-litres with the rear seat backs folded. Audi did a fine job of sculpting an elegant but sporty shape for its A5 Sportback and the larger A7 version has much of the same style. The long flowing roofline of the five-door car serves to lower it visually, bringing a sleeker profile than a conventional saloon while also delivering impressive aerodynamic performance. The shape is particularly well resolved around the rear where the tailgate ends in a sharply contoured flourish with a curving spoiler lip spoiler. More bold creases on the bumper and boot lid produce a purposeful look. The usual cavalcade of high-tech titbits you'd expect in a top line Audi feature on the A7 equipment list. The SE and S Line specifications get xenon headlamps, electric tailgates, full leather trim, electric heated seats, cruise control, satellite navigation, Bluetooth and DAB digital radio. S Line modes get firmer settings for the independent suspension system but there's also a Sport suspension option that's halfway between the standard and the S Line. The S7 is more lavish still, with a choice of various hard trim finishes, including carbon fibre. The options list has an upgrade to the MMI control system which introduces MMI Touch with its 8-inch monitor and touch sensitive control pad. There's a navigation upgrade with a module which can download news, weather and route information from the driver's home computer to the car and Audi also here offered a head-up display for the first time. The park assist system can detect viable parallel parking spaces and take over the steering to manoeuvre the A7 into them. 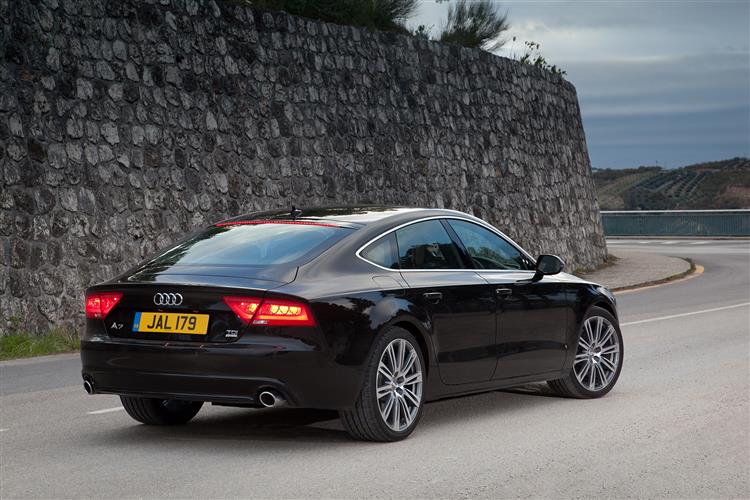