As a nation, we love our performance hatchbacks like no other. We can't seem to get enough of any small car with a bit of the go-faster fairy dust sprinkled over it. There are some rather curious exceptions though. When Mazda first launched its Mazda3 MPS superhatch back in 2006, we got a bit sniffy about it. The formula seemed quite straightforward. Here was a car that shared many of the same underpinnings as the Ford Focus ST but was significantly more powerful, better equipped for the money, offered better weight distribution but a slightly firmer ride. Yet it pretty much bombed, the Focus ST outselling it ten to one. Fast forward to 2009 and this Japanese brand tried again, launching a second generation Mazda3 MPS. Do these make a smart used buy? Here's what to look for.

Despite looking radically different to its predecessor, the 2009 Mazda3 MPS in fact shared a large percentage of common parts. The engine was a carry over unit, developing the same 260PS, but tweaked to meet Euro5 emissions regulations. The basic chassis setup was also carried over, albeit with some tuning done to improve the ride/handling balance. The big difference between this car and its predecessor was that it now looked properly sporty, rather than a car that apologetically wore some spoilers as if it was reluctantly trying them on for size. This hit the right notes from the outset, with industry monitor CAP upping its benchmark three-year/60,000-miles forecasted residual value by three percentage points against the old MPS. Sales were steady if not spectacular, helped by a £21,500 asking price, but set against some frankly horrible trading conditions. In 2011, long time tuning partner of Mazda's, BBR, offered three engine tuning upgrades for the MPS, with a choice of power outputs at 290, 320 and a sensational 380PS. Mazda themselves made a significant change to the MPS at the end of 2012, adding a new gunmetal finish for the 18-inch alloy wheels, whilst the inner roof spoiler, door mirror housings and lower rear bumper trim were finished in a Black Mica finish. The MPS soldiered on until the end of 2013 when an all-new Mazda3 model line up was introduced.

Whereas most sports hatches aren't that well appointed, this one's spec list is pretty impressive. You'd expect sports seats, 18-inch alloys and twin exhausts, but you'll also get a 10-speaker Bose stereo, sat nav and rear parking sensors, all extras that would probably tack around £2,000 onto the price of a rival. It's fairly practical too, with 300-litres of boot space on offer, depending on the variant you choose. Push forward the backrest and the load bay isn't completely flat, but it is quite big, with 1360-litres on offer in a cargo area that's long, deep and practical. As for passenger space, well, rear room is adequate, with good foot space under the front seats, but a central adult passenger won't enjoy themselves given that the rear bench has been carefully shaped for two. Three children should be OK there though. At the wheel, a classy update was needed if the Mazda3 was to keep pace with more recently introduced rivals. In response, the designers replaced the previous silver colour of the lower dashboard console with black. And ringed the dials and controls most used by the driver in satin-polish silver that was supposed to be easier to see. The result is a more cohesively styled cabin and while you wouldn't think yourself to be in a Mercedes A-Class in terms of materials quality, this second generation Mazda3 MPS is definitely a step or two upmarket from its predecessor in terms of look and feel. For enhanced 'active' safety appropriate for a high-performance model, the car comes with Bi-Xenon headlights featuring a swivel-type Adaptive Front Light System (AFS), front fog lamps, a radar-based rear vehicle monitoring (RVM) system and large, 320mm diameter ventilated front disc brakes. 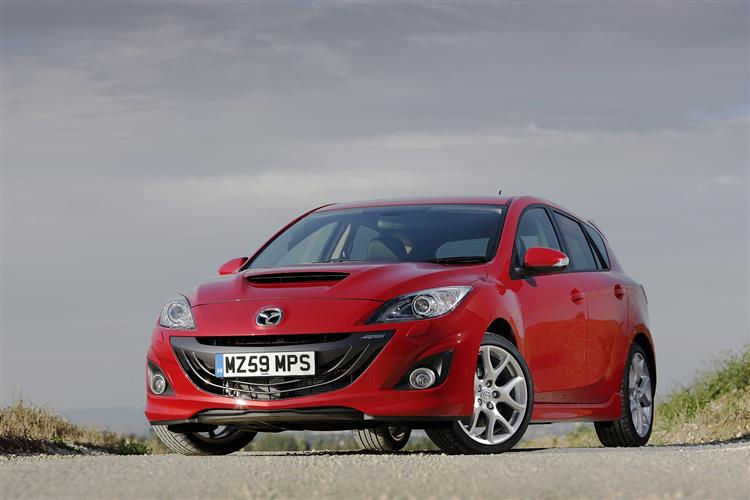