The recipe for the Mazda3 family hatch seemed to be a surefire winner. Take the best chassis in the business, namely that of Ford's Focus, and on top of that construct a car with a better reliability record, aggressive pricing and distinctive styling. But when you looked for the Mazda3 at the top of the sales charts, it just wasn't there. Nevertheless, this model has racked up some respectable sales for its Japanese brand, both in the first generation guise launched back in 2003 and with that car's swoopier, higher-tech successor, this second generation version, a model that arrived here in 2009. If you're looking to buy a MK2 Mazda3 on the used market, we'd suggest you try and track down one of the later facelifted versions that we're going to look at here, cars produced between 2011 and 2013. These were smarter, better equipped and more cost effective to run. Here's what to look for when tracking down a used example.

Mazda launched the facelifted version of the second generation Mazda3 at the tail end of 2011, with the first cars actually arriving in dealers in early 2012. For a car that would be replaced at the end of 2013, the changes were fairly wide reaching, with a focus on improving interior quality, offering better value and bettering the old car's efficiency. The car launched with a big range straight from the start, with three diesel and three petrol engines and a trim structure that ran S, TS, Tamura, TS2, TS2 Nav, Sport, Sport Nav and MPS. In August 2012, Mazda added a Venture Edition special, with front fog lights, gun metal alloy wheels, sports front grille, side skirts and rear spoiler and privacy glass. Inside, you got Sanyo TomTom navigation with 5.8-inch touch-screen display and integrated Bluetooth, plus climate control air-conditioning and cruise control. Mazda updated the flagship MPS hot hatch model to give it a good deal more visual clout at the end of 2012, adding a new gunmetal finish for the 18-inch alloy wheels, whilst the inner roof spoiler, door mirror housings and lower rear bumper trim were finished in a Black Mica finish. At the same time, the brand took the red pen to its model range, offering only Tamura, Venture and MPS models from that point. This range lasted until the model was replaced by an all-new third-generation car at the end of 2013.

Enhancements to this post-2011 facelifted model over the original post-2009 second generation Mazda3 included a subtly re-styled front grille and bumper and updated alloy wheel designs. At the rear, where again a re-sculpted bumper features, the differences are even harder to spot, but the look remains clean and neat. Fairly practical too, with between 300 and 340-litres of boot space on offer, depending on the variant you choose. Push forward the backrest and the load bay isn't completely flat, but it is quite big, with 1360-litres on offer in a cargo area that's long, deep and practical. As for passenger space, well, rear room is adequate, with good foot space under the front seats, but a central adult passenger won't enjoy themselves given that the rear bench has been carefully shaped for two. Three children should be OK there though. The rear doors are smallish and don't open as wide as some rivals, so getting in requires a bit more suppleness. At the wheel, the designers tried to add some extra class to this facelifted model by replacing the previous silver colour of the lower dashboard console with black. Meanwhile, the dials and controls most used by the driver were ringed in satin-polish silver that was supposed to be easier to see. The result was a more cohesively styled cabin and while you wouldn't think yourself to be in a Mercedes A-Class in terms of materials quality, the result was definitely a step or two upmarket in terms of this Mazda's look and feel. 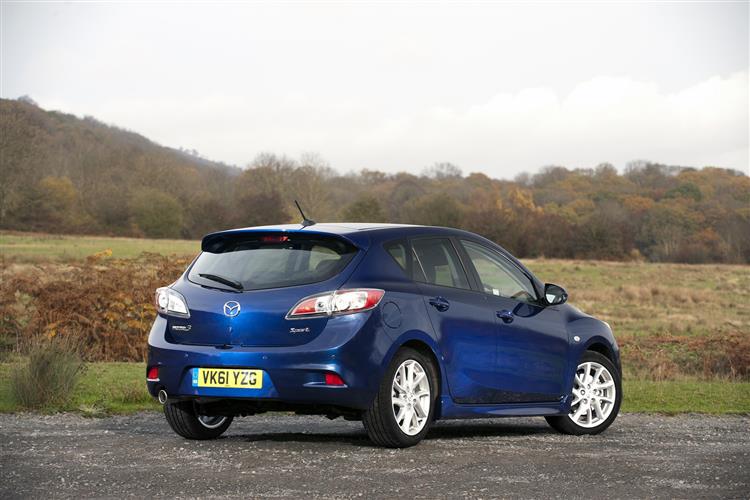