The Porsche Panamera is a car that tends to divide opinion. Some think it's purely there to give the Stuttgart brand the money to develop its sportscar range. Others find its sense of style a little challenging. And then there are finally those who have actually driven the car. They tend to love it. It's a design with a unique feel and one with a fairly narrowly defined set of priorities, but if you fit the demographic, it makes a great used buy. Here's what to look out for.

Porsche isn't a company accustomed to getting kicked in the nether regions by the automotive press, but upon the launch of the Panamera, it got a distinctly sniffy reception. This car wasn't sleek like a Maserati Quattroporte or muscular like a BMW M5. Instead, it was huge and, to put it politely, from some angles rather awkward in appearance. Critics instantly seized on the fact that Porsche had lost its way. Perhaps the criticisms of its styling were justified, as in 2013 Porsche launched a somewhat sleeker model, but the original car we look at here has a lot going for it in other areas as a used proposition. It was first shown at the 2009 Shanghai Show and the first UK deliveries began in autumn 2009. The range initially consisted of the 4.8-litre Panamera S and its turbocharged sibling. The 3.6-litre petrol model debuted the following year, along with a series of small upgrades to the range. A Powerkit was offered on Turbo models raising output by 40PS to 540PS. A Sport Design Package with 20" Panamera Sport wheels was added to the options list. And Porsche Torque Vectoring Plus was offered as an option on V8 models. 2011 saw the launch of the 3.0-litre Hybrid model, adopting tech previously seen in the Cayenne SUV. That year also saw the introduction of the diesel version and of the Panamera Turbo S, a 550PS powerhouse to act as flagship for the range. From June 2011, a new wireless internet access was offered on the Panamera, allowing passengers to go on-line while in the car. Further options available from Autumn 2011 included the Lane Change Assist system adapted from the Cayenne. This monitors the area behind and to the side of the vehicle, as well as the critical 'blind spot', and informs the driver via a signal in the exterior mirror if the system has located another vehicle in the adjacent lane. The Lane Change Assist system is activated by a switch on the driver's door and operates between 19 and 156 mph.

We'll leave it to you to decide quite how pretty a Panamera is but don't be surprised if friends find its styling challenging to say the least. It is one of those cars that has a definite physical presence though. You'll find yourself checking your reflection in shop windows or casting a look over your shoulder once you've parked it. At 4.97m long, a Panamera is within a couple of millimetres of the length of a Range Rover and the high flanks will make you thankful of its reversing sensors. The standard 18-inch alloy wheels you get on some models look a little overwhelmed by the sheer amount of bodywork on display but stick with them if you want respectable ride quality. Go for bigger alloys and you'll then need to shell out for the air suspension. It's standard on cars like the Turbo and the Hybrid. Inside there's still the same low-slung seating position you'd find on a Porsche sportscar, with a centre console that's festooned with buttons and which seems to have drawn stylistic influence from Vertu mobile phones. The centre console extends from the dash right through the car to the rear seats, dividing the cabin into four individual cockpits. The boot holds 445-litres, which is comparable to your average compact executive saloon. Fold the rear seats down and the Panamera can offer a full 1,263-litres of capacity beneath its hatchback. The luggage bay itself is designed to be deep so that it can take suitcases in the upright position for ease of access. 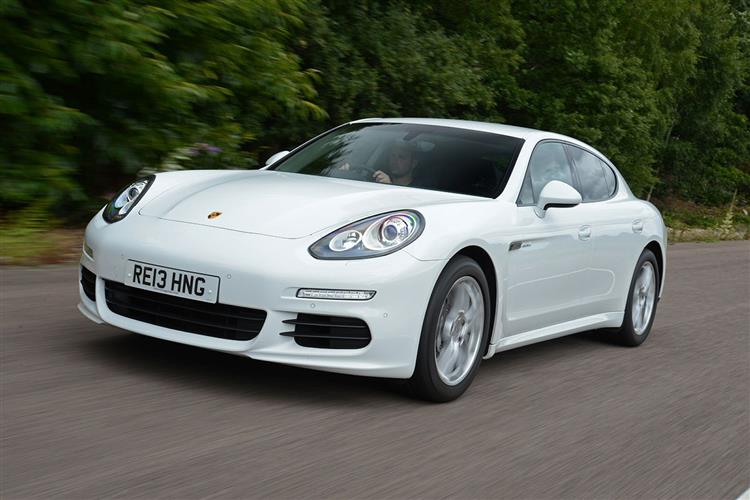