THE POWER OF TEN (some text hidden)

Genuine mid-engined exotics don't tend to wear German badges. Yes, there have been a few such anomalies down the years, but they rarely received the acclaim of their Italian counterparts. Here's the car that broke the mould, the Audi R8. Here was proof that you could buy a car with the charisma and presence of a Lamborghini and the engineering of, well, of an Audi and in V10 guise it has the performance to match. If you've been put off buying a supercar in the past because of their fragility and flakiness, here's where you should be looking to buy used.

It's easy to become a little bit blase about motor show prototypes. It's fairly easy to create a sexy shape, but it takes a whole lot more fortitude to green light the car for production, with all the engineering headaches that go with passing emissions regulations, crash tests, making exotic materials a production reality and so on. Therefore when Audi showed the Le Mans quattro concept car at the 2003 Paris Show, we all cooed, thought it looked very nice but weren't expecting anything like it to make production. And it didn't. Not for three years in any case. Then at the 2006 Paris Show, Audi showed the R8, named after its hugely successful Le Mans winning sports car. This was the production-ready vehicle and, to be honest, it didn't look that different from the 2003 show car. Onlookers were suitably flabbergasted. Rivals were caught on the hop. In truth they should have seen it coming. Audi's purchase of Lamborghini in 1998 led to a gradual but accelerating cross-fertilisation of ideas. The Italian company benefited from Audi's quality control, production efficiency and expertise in aluminium construction while the Germans got a halo marque, access to Lamborghini's carbon-fibre speciality and an insight into understanding high-end buyers. It was a win-win and it didn't take long to realise that there was a lot of Lamborghini Gallardo in the R8's genes. The R8 first appeared as a V8 model, using much the same 4.2-litre normally aspirated engine that powered the acclaimed RS4 saloon, but the clamour for more power saw it receive a modified version of the Gallardo's 5.2 V10 in 2009. Suddenly the R8 had become very serious, packing 525PS and being offered in both a coupe and a Spyder convertible model. A more track-focused 560PS GT coupe variant was announced in very limited numbers, with just 333 being sold worldwide and 33 of those coming to the UK. A Spyder version was announced in May 2011 at Le Mans. A refreshed version of the R8 was shown at the China Motor Show in August 2012. The old R-tronic automatic gearbox was replaced by a twin-clutch S-tronic, the styling had been subtly refreshed and an R8 V10 Plus was introduced as the flagship model. This featured the same carbon fibre reinforced plastic used on the R8 GT. The front splitter, mirrors, side blades, rear diffuser and lining for the engine compartment are all constructed of the lightweight material. The 5.2-litre V10 was also slightly improved compared to the standard V10 model, producing 550PS and 540Nm of torque. What You Pay (used_pay)

Improving on the V8 model was a tall order and the R8 V10's weight distribution has shifted a couple of percentage points towards the rear whilst retaining the same torque split for the four-wheel drive system. The interior gets Nappa leather and satellite navigation as standard, while the exterior receives carbon sideblades, a big rear diffuser, all-LED headlights, twin ovoid exhausts, 19-inch alloy wheels and discreet V10 badging. Given that most V8-engined R8s have been heading out of dealerships specified to a point somewhere north of £90,000, the relatively modest premium Audi ask for the V10 looks money well spent. 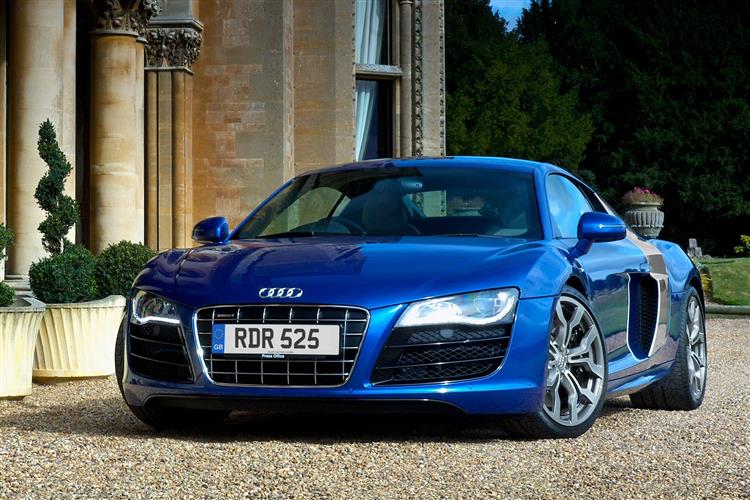