It's never easy to predict which cars will be hits and which will be misses. On the face of it, introducing a convertible version of the Audi A3 looked to have winner written all over it but sales were always a little stickier than Audi would care to admit. Not that they were overly concerned, with year on year overall brand sales clambering skywards at a frightening pace, but the soft top A3 just never really chimed with British buyers. Here's what to look for when shopping for a car that might just make more sense used than new.

Although Audi makes much of its niche marketing strategies, its most successful products are usually those where buyers feel reassured by their positioning. You know where you are with an Audi A3. It compares to a BMW 1 Series or a Mercedes A-Class. Likewise, the big selling A4 butts up against the BMW 3 Series and the Mercedes C-Class. Buyers feel safe in the knowledge that they can compare and contrast. The A3 Cabriolet was pipped to the market by BMW's 1 Series Convertible and never really recovered from that initial setback. What's more, chopping the roof off the 1 Series turned an ugly hatchback into a more elegant drop top, whereas decapitating the handsome A3 hatchback actually didn't do a lot for its aesthetic. The car made landfall in the UK in late 2008, with very little in the way of promotional push from Audi. Two diesel engines and three petrol units were offered, in conjunction with a trio of trim levels. The diesels comprised a terrible 104bhp 1.9-litre TDI unit and a very good 138bhp 2.0-litre TDI engine. The petrol engines kicked off with an unspectacular 101bhp 1.6-litre, moving through the more satisfying 158bhp 1.8-litre TFSI unit, with the multi-award winning 197bhp 2.0-litre TFSI unit marking the pinnacle of the line up. In 2009, the 1.9-litre diesel nail was superseded by a far preferable 1.6-litre unit and in 2010 the 1.6-litre petrol lump was replaced by the excellent 1.2-litre TFSI petrol engine. Audi launched plush Final Edition models in both Sport and S Line trims in 2013 to mark this car's run out.

What You Getword count: 182

Straightforward conversions of compact hatchbacks rarely make elegant drop tops and the A3 Cabriolet tries hard but can't escape its fundamental short and squat footprint, even if it is 24mm longer than the A3 three-door hatch. Still, Audi has done a good job packaging the car, the hood's compact dimensions meaning that there's enough space for four adults inside. The hood itself can be specified in semi or fully automatic versions, the latter of which includes additional acoustic insulation and raises in just nine seconds at speeds of up to 19mph. A heated glass rear window is standard and the fully automatic hood can be operated via the key fob. Other highlights are the optional R8-style daytime running LEDs in the headlamp pod. The windscreen is set at the same angle as the hatchback model, which is a welcome relief after the steeply canted screen that designers fit to hard top convertibles in order to try to shorten the roof length. These not only reflect the dash top badly but often cause dangerous blind spots, not something the A3 Cabriolet suffers from. 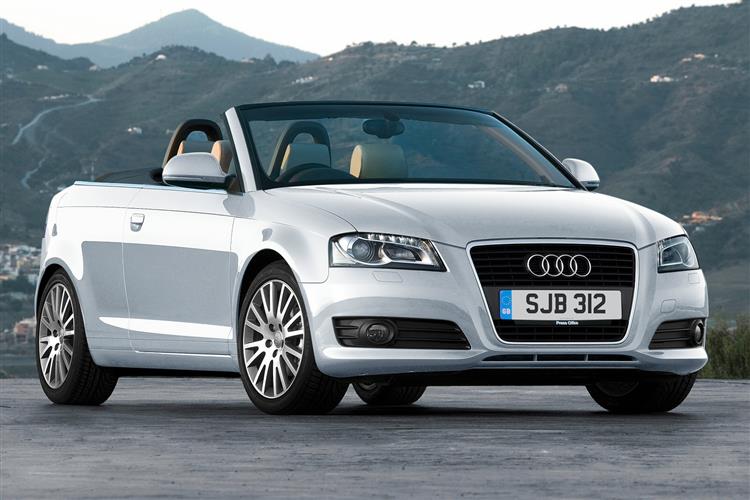