There aren't too many hatchbacks that you would class as properly extreme but Audi's RS3 Sportback certainly falls into that category. It packs a massive 337bhp haymaker which is enough to give it the firepower to embarrass some very senior performance cars and with an all-wheel drive quattro transmission, it steps off the line as if it's been rear-ended by a wrecking ball. If you want a car that's low key but highly effective, this could be your thing but does it make a solid used buy? Let's have a look.

Of course, we've had no shortage of hilariously rapid Audi models in the past. Who could forget the Porsche and Cosworth developed RS2 or the ballistic V8 RS4 models? The TT RS is also a much underrated weapon of choice if you like the feeling of longitudinal g. The RS3 Sportback joined this club in 2011 when it was announced in November 2010 for 2011 model year production. By then, the A3 platform had seen quite some service. This second generation model was introduced in 2003 and the all-new A3 platform, based on the modular MQB chassis was already well under development for its 2012 launch. So Audi knew that it was working with something that was always going to be a run-out special, a last frenetic hurrah for the second generation A3. And so it proved. The take-up for the RS3 was so frenzied that by the time Audi announced its UK allocation, all the cars seemed to have been accounted for. The original press launch was a little apologetic in that regard, Audi informing journalists that it didn't really matter what they wrote about the car for all UK-bound examples had been pre-sold. As it turned out in fact, the RS3 got a broadly favourable review, with most pundits recognising that here was a uniquely effective hot hatch. Encouraged by the strong sales, Audi managed to 'find' a few more RS3s to import which took it to the end of 2012.

What You Getword count: 119

The standard Sportback is a good-looking platform to build from and the RS3 looks resolved in a way that few range-topping sports variants manage. Like all Sportbacks, the RS3 enjoys an 83mm increase in body length and extra wide opening rear doors over a three-door A3 which means easy accessibility and far better rear knee and head room. A flat-bottomed steering wheel looks suitably racy and makes getting in and out that little bit easier. Space up front is equally good, the transverse engine and front-wheel drive transmission minimising intrusion into the passenger cell. The luggage compartment of this five-door car features 370 litres of fresh air with rear seats in place and then 1220 litres with them folded. 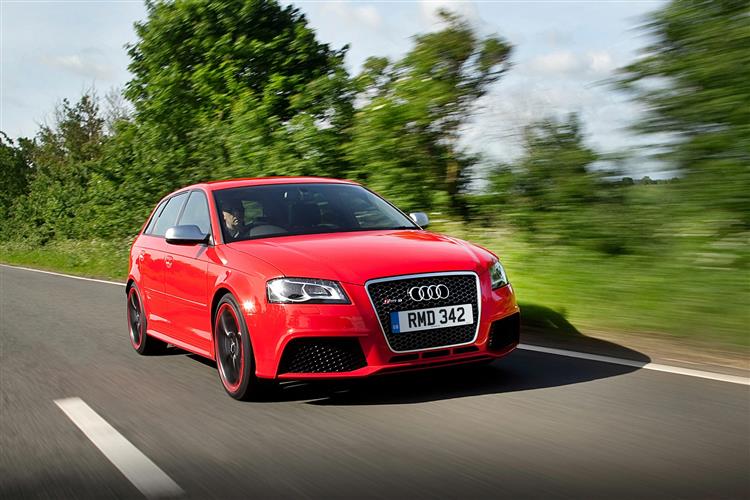