If we put this in supermarket terms, Hyundai used to be very much at the ALDI and Lidl end of things. It sold simple cars at low prices, emphasising how much customers could get for their money. But Hyundai didn't see much of a future for itself in the bargain basement. It wanted to be battling it out with the Tescos and Sainsburys of the car world in the mainstream. There was only one way that this could be achieved and it began with higher quality products. The i20 supermini was amongst the first Hyundais to make the leap up market and it's now around in reasonable numbers as a used car.

The car that really signalled Hyundai's intent to claw its way into contention with the mainstream car brands in the European market was the i30 which emerged in 2007. That model was a family hatchback and it was followed by the i10, a compact citycar, in 2008. It was no surprise then that the car which arrived to replace the aging Getz in 2009 was a supermini called the i20. The task of establishing Hyundai as a direct competitor for the likes of Ford, Renault and Volkswagen was never going to be straightforward and the people in charge at the Korean firm knew they were embarking on gradual process. That's why the i20 was designed in Europe specifically around European tastes and felt like a far higher quality product than the marque's previous supermini offerings but it also came with old Hyundai staples like decent equipment levels and a monster warranty package. Buyers needed time to get used to the idea of putting the i20 on their shopping lists alongside the Clio, Fiesta and Yaris on merit so Hyundai did what it had always done in the past and gave the car a value for money angle to fall back on. The five-door cars arrived early in 2009 and were joined by the three-door versions in April of that year. Three engine options were offered which meant a choice of 1.2 or 1.4-litre petrols or a 1.4-litre CRDi diesel which came with either 74 or 89bhp. A special edition variant dubbed Edition arrived in 2010 to join the standard trim level hierarchy of Classic, Comfort and Style.

Hyundai played it quite safe with the looks of the i20 and this may have been a deliberate move as buyers get used to the idea of a Hyundai that can stand toe to toe with the top supermini products with regards interior quality as this one can. The thick swage line that runs down the sides of the car just above the door handles does provide some interest but the general effect is of an identikit supermini that lacks the personality of the leading alternatives. The interior however, will cause many to revaluate Hyundai because the materials and build are far superior to those of the old Getz. Again, the design flair that rivals have worked so hard to instil is absent but the layout is neat and the controls couldn't really be any easier to operate. The i20 is a good size compared to its supermini contemporaries. A kerb weight of 1,222kg means it's no featherweight but it makes good use of its bulk by delivering a respectably spacious cabin. Space in the back will be generous enough for adults to undertake short journeys and fine for kids, while the boot is impressively proportioned. Fold down the 60:40 split rear seats and a flat load floor is created with room for some seriously big cargos. There's also a massive glovebox and a number of other useful receptacles dotted around the interior. Even the entry level Classic model comes with air-conditioning, an iPod connector for the stereo, electric front windows, electric door mirrors and a trip computer. Matched to the i20's attractive pricing, the generous equipment levels showed that despite its move upmarket, Hyundai could still play the value for money card that has served it so well in the past. Safety equipment is similarly abundant on the i20 with every model getting ESP, six airbags and active head restraints. These helped the car achieve a commendable five-star rating for occupant protection in the Euro NCAP crash tests. 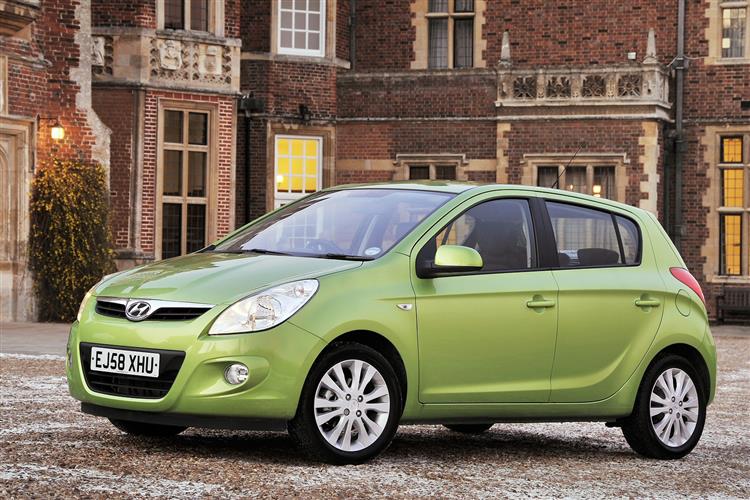