In cricketing parlance, it would probably be called a swing and a miss. Every once in a while, major manufacturers will launch a new car that for all the world looks as if it'll be a success but then singularly fails to fire the public's imagination. There's usually a solid underlying reason for this, be it pricing that's a bit optimistic, something about the car that's a bit too alien for public tastes or merely the fact that the car is ahead of its time. All three of these reasons can scupper the sales of a new model but they become far less of an issue when considering a used car. The Toyota Urban Cruiser is one of those models that failed to live up to sales estimates but that merely means that for used car buyers looking for something the neighbours won't have, it makes interesting material. Reliable, well priced and cheap to run, it looks a used winner all the way.

Driving a 4x4 in the city was often portrayed as the social equivalent of gunning a jetski through the toddler's swim beach but the negative press hasn't deterred Toyota from developing a small SUV-style car specifically for use in town. With a name like Urban Cruiser, its purpose could hardly be any less ambiguous and the Japanese manufacturer was confident that it could shed the stigma that's often unfairly attached to its contemporaries. To be fair, the commitment to reducing carbon dioxide emissions and the hybridisation of many 4x4s has reduced the urban stigma more than anything else, but Toyota saw a niche and went for it. The production version of the car was unveiled at the 2008 Paris motor show based on a concept created by ED2, Toyota's design studio in the South of France. It arrived in UK dealers in summer 2009. Smaller than a RAV4 and without the off-road pretensions, the Urban Cruiser seemed an intriguing prospect in the sub-compact 4x4 sector. It also marked an industry milestone in achieving the world's lowest CO2 emissions for a four-wheel drive car. The figure of 130g/km for the 1.4 D-4D AWD model demonstrated Toyota's commitment to efficiency.

The Urban Cruiser doesn't immediately say '4x4' when you clap eyes on it. The impression is more one of a pumped-up hatchback. At 3,930mm in length and 1,725mm wide, this Toyota is certainly a compact customer but the long wheelbase of 2,460mm helps to deliver acceptable levels of interior space. A boot of 314 litres isn't bad and the 60:40 split rear seats up capacity to 749 litres when lowered. Inside the Urban Cruiser, there's a little more sparkle than in recent Toyota efforts but not too much. The novel instrument display is modelled on a radar screen and incorporates speedometer and tachometer dials within the same circle, secondary displays being then positioned to either side. The 2WD version features Toyota's Easy Flat seating system which allows the seats to slide, recline and fold, but the presence of a transmission tunnel precludes the 4x4 models from utilising this feature. Standard equipment levels on the Urban Cruiser run to climate control, 16" alloy wheels, privacy glass, keyless entry and start, retractable door mirrors and a six speaker stereo with wheel-mounted controls. It's positioned in the market below the compact 4x4s like Toyota's own RAV4 and the Nissan X-Trail, alongside models that make little or no pretence at off-road ability, concentrating instead on rugged urban style. The Urban Cruiser's tough looks lead you to expect a certain ruggedness should the worst come to the worst. Sure enough, the body structure incorporates Toyota's Minimal Intrusion Cabin System which works to absorb impacts, distributing the forces around the vehicle and preserving the integrity of the passenger compartment. Seven airbags are fitted as standard which is impressive in a car of this size and active head restraints protect against whiplash. ABS, Brake Assist, brakeforce distribution, stability control and traction control are also standard, making this one of the best equipped small cars around from a safety perspective. 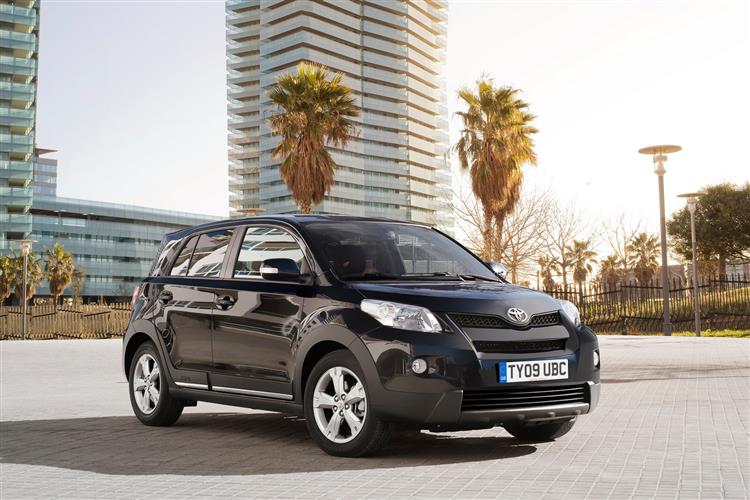