On the face of it, the Audi A6 allroad seems an idea that's unlikely to fly. A good proportion of buyers of 4x4s want the highly elevated seating position but aren't particularly bothered whether the vehicle in question is all-wheel drive or not as it's rarely, if ever, about to venture off road. Therefore you'd think that a relatively low-riding estate car fitted with four-wheel drive might not be a sales winner. The allroad, now in its second generation, has disproved that and has sold well to a specific niche of buyers who want civilised driving manners on road and the capability for the occasional foray off it. It's a template that has spawned a host of imitators but the Audi remains the prime exponent. Here's how to find a used example.

The previous generation allroad had a very good run at the market, being sold from 2000 to 2006, so Audi had quite some time to engineer a thoroughly developed successor. When that car appeared in 2006, the first impressions were that perhaps it had had too long, that the allroad's rugged looks had been smoothed, polished and chamfered a little too much. Then we drove the car and realised that we needn't have worried. One significant change was that the focus was firmly put on diesel engines with the 2006 allroad. Buyers chose either a 178bhp 2.7-litre TDI or a 229bhp 3.0-litre TDI unit but there were a pair of petrol engines offered, in this case a 3.2-litre FSI powerplant good for 252bhp and a 4.2-litre V8 FSI that generated 347bhp.

The genius in the allroad is that it offers the capability of a 4x4 with the stealthy appearance of a standard estate model. The old allroad played up to the 4x4 crowd with its plastic body cladding but the latest car is, if anything, even more low key. The body cladding has been ditched and the styling is understated, with subtle wheelarch spats and stainless steel under-ride plates offering some protection to the car's vital organs. The number plate has been repositioned higher up on to the grille to prevent it being ripped away by sharp inclines. Other design features include chrome strips on the grille bars, beefier bumpers and bigger door mirrors. The sill extensions and wheelarch trims help prevent gravel damage to the car's paintwork. Aluminium roof rails are also standard. It's underneath that the A6 allroad really gets clever. The adaptive air suspension of the old model was a masterstroke, allowing the allroad to handle like a normal estate car when in tarmac mode and then giving it the ride height to do some quite respectable clambering when fully raised. The latest allroad reprises that theme, but remember that this is a much bigger car all round. The wheelbase is fully 76mm longer than the old allroad, so it may not be quite as manoeuvrable in situations at the extremes of what the car can tackle. The car is wider too with a front track up by 22mm to 1,596mm while the rear has been increased by 2mm to 1587mm. The good news is that weight distribution between front and rear axles has been optimised. 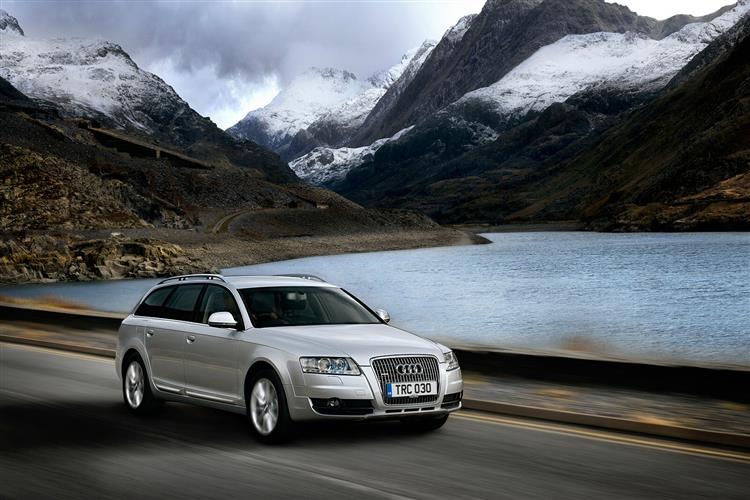