INSIDE THE BOX (some text hidden)

Small MPVs aren't usually big on excitement and some people could easily fall into stupor at the prospect of a van-based one but Fiat's Qubo deserves a moment of your time. It offers the space and practicality you'd expect from an ex-commercial vehicle but Fiat's stylists have done a grand job of enlivening the exterior. Van-based MPVs are built tough so kids can't do too much damage, there's acres of space inside yet they're easy to see out of and park. Here's what to look for when shopping for a used one.

The back story to the Fiat Qubo is one that might put interested parties off. It used to be a Fiat Fiorino, the company's sub-compact light commercial vehicle. Yes, a van. There will be prospective buyers who won't consider it for that reason alone but those who can overcome their internal snobbery and give the diminutive Fiat a chance on a level playing field are likely to come away surprised. Vans aren't what they used to be and with the 1.3-litre Multijet diesel installed, Fiat's little package of practicality could be just the thing. One of the major challenges for designers asked to conjure up MPV people carriers is to cram as much space and utility as possible within the confines of the vehicle's dimensions. The smaller the vehicle, the tougher it is to accommodate everything and everyone that its owner might ultimately need to. Down the years, a huge amount of pondering must have been done in trendy design studios as to how best to achieve these goals and invariably, the train of thought has hit the buffers at something roughly equivalent in shape to a van. The Fiat Qubo cuts out the middle men, making the step from small commercial vehicle to small MPV courtesy of some added windows, seats and styling enhancements.

What You Getword count: 314

The Qubo has all the key design elements of a roomy small car nailed down. The wheels are pushed right out to each corner of the vehicle, the bonnet is stubby and the roof is tall. The commercial origins of the Qubo don't lead you to expect too much from a design standpoint but Fiat's stylists have done some neat work in jazzing-up the exterior. The oversized bumpers and wheelarches are carried over from the Fiorino van and work well but the Qubo includes roof rails which add to its chunky, almost 4x4-style appearance. Then there's the dramatic rear side windows, the bottom edges of which slope steeply upwards towards the rear of the car, and the large Fiat badge which nestles in a deep circular depression in the centre of the tailgate. At under four meters from nose to tail, the Qubo is certainly small but there's lots of space inside. There's more headroom than you could possibly find a use for and legroom all round is ample for adult-sized passengers. Access to the rear is helped by the wide-opening side doors and in contrast to many of today's compact car offerings, the boot is very generous at 330-litres. The rear seats fold down but if you want to get maximum cargo on board, you'll need to remove them completely. This procedure converts the Qubo back into something approaching van form with a huge 2,500-litre capacity. As with the outside, the interior doesn't instantly scream 'van' at you. The layout is simple and functional with a stubby dash-mounted gear lever and large, uncomplicated controls for the audio and ventilation systems. Storage options include an extremely big glovebox and a number of other smaller receptacles, better than you'd expect in a car of the Qubo's size. Anyone familiar with the inside of Fiat's Panda city car will spot similarities in the switchgear and layout. 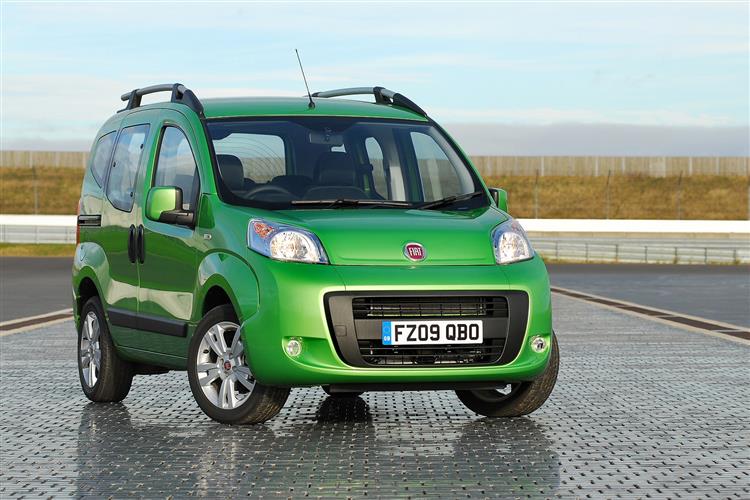