I WIDE OPEN (some text hidden)

There were exceptions but for the most part, people used to buy Hyundais because they didn't care. They didn't mind if the car blended into the scenery with its unadventurous and dated looks and they weren't bothered if the colour pallet in the creaky interior consisted entirely of elephant grey. Performance scarcely flickered onto their radar and mediocre handling was fine by them. They wanted cars with big equipment quotas matched to small price tags and that's what Hyundai used to do very well. Competing at the budget end of the car market isn't easy. Margins are tight and there isn't much room to turn a profit. It's far better to sell cars with more perceived quality and desirability at a decent mark-up and this is what Hyundai undertook to do. The i30 was the first tangible evidence of this change in the brand's philosophy. The car was designed and built in Europe around European tastes and it showed. Launched in 2007, the i30 was not spectacular in any way but in terms of design, engineering and build quality, it set standards that hadn't been seen before from a Hyundai. Better still, the prices remained competitive and an outstanding warranty package was tagged on to keep Hyundai's existing value-hungry customer base content. Suddenly the i30 was being thrown into group tests with the Ford Focus, Honda Civic and Vauxhall Astra where previous compact Hyundais would have been compared to Protons, Mitsubishis and Suzukis. The i30's thunder was only partially stolen by the cee'd, which is basically the same car but sold by Hyundai's sister company Kia. The Estate version of the i30 was launched early in 2008 to supplement the standard 5-door hatch bodystyle. In early 2010, the specifications of the i30 were tweaked with an entry-level Classic model introduced to prop-up the range. A facelift a few months latter added revised bumpers grille and side mouldings.

What You Getword count: 425

If there's one area where the i30 comes up conspicuously short of the top family hatchbacks, it's styling. The car is neat and inoffensive on the eye but there's little to excite about its shape or detailing. A certain measured blandness never hindered the MK2 Ford Focus or any generation of the Toyota Corolla however, and inside the i30 fares better. It's still hardly what you would call avant-garde design-wise but the quality of the materials and the construction is convincing. Space is plentiful for the rear seat occupants and the huge boot suggested by the car's bulging rear end is only a mild disappointment. It's a good size for the class rather than enormous, with 340 litres available. Fold the rear bench and this rises to 1,250 litres. Unusually, the platform the Estate sits on is different to that of the hatchback, with a massive 235mm worked into the wheelbase, giving greater legroom in the rear and freeing up plenty of luggage space. There's 534 litres with the rear seats in position. Fold down the 60:40-split rear seats and this expands to a hefty 1,664 litres. The i30 was designed specifically for the European market and benchmarked against class leaders like the Volkswagen Golf and Ford Focus. Like those two cars but unlike many of the other established names in the sector, the i30 has fully-independent suspension all round or at least a version of it. In fact, the rear suspension is a kind of independently suspended torsion beam, something of a halfway house solution between proper independently sprung models and those that settle for an old fashioned torsion beam. Independent springs give a suppler ride and more composed handling but the torsion beam is a more compact arrangement so it helps with packaging issues and interior space. The i30's set-up is a compromise between the two. Standard specification included 15" alloys, front fog lights and body-colouring for the bumpers door handles and mirrors. This meant that no i30 left the showroom looking like it had just been winched up from the bargain basement, a factor that only enhanced the car's public perception. Electric windows are fitted all round, there's air-conditioning and remote central locking is also standard, along with an MP3-compatible CD stereo. The Style adds bigger alloys and mixed leather trim for the interior. The Premium lives up to its name with the standard spec plus yet bigger alloys, full leather, climate control, parking sensors, heated seats and rain sensing wipers. Hyundai's reputation for generous specifications then, remained intact with this car. 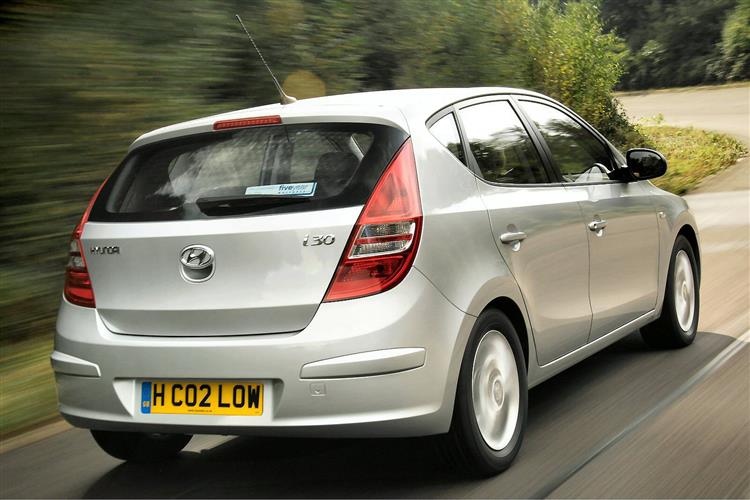