AIR AND STYLE (some text hidden)

There's a fine line to be trodden by convertible cars and for my money, the Audi A4 Cabriolet stands astride it like a colossus in a designer frock. On one side of the Audi, you have family hatchbacks and superminis with their roofs scythed off. They're cheap and reasonably cheerful but hardly the last word in elegance. On the other, are the real show-off machines. The sky's the limit on price and luxury with these but they're only likely to collect jealous sneers and the occasional hurled drinks container on the average British high street. The A4 Cabriolet manages to appear cool, yet classless, a neat trick that makes it a desirable used proposition and not just for image-conscious ladies of a certain age.

This A4 Cabriolet is more of an update of the model that debuted in 2001 than an all-new car in its own right. Launched in 2005, it did, however, feature a host of revisions that dramatically improved its competitiveness against the BMW 3-Series Convertible, Mercedes CLK and Saab 9-3 Convertible. The A4 Cab already had the core appeal to give these rivals a run for their money but it was based more on style than superior quality or ability. Post-2005, Audi's four-seat drop-top was a much more rounded proposition than in the past and there was no longer any need to remind prospective customers that Princess Diana used to drive one. This version spoke much more vocally for itself. The engine range kicked off with 1.8 and 2.0-litre four-cylinder turbocharged petrol engines, the 2.0-litre version being a modern direct injection unit. Above that came the 3.2-litre V6 and the 4.2-litre V8 from the S4 Cabriolet model. Diesel played a larger role in the range than in any previous Audi convertible, with 2.0-litre and 3.0-litre TDI variants offered. Standard, Sport and S Line trim levels were offered, with the more powerful cars offered with quattro all-wheel-drive. It wasn't until 2006 that the mighty RS4 Cabriolet arrived with a 414bhp version of that V8 petrol engine and all sorts of other performance modifications. It was testament to the standard car's improved handling and body control that Audi believed an RS version would stand up to scrutiny against the likes of the BMW M3 Convertible. The arrival of the A5 Cabriolet in 2009 finally spelt the end for this A4 version.

What You Getword count: 278

This A4 Cabriolet can be distinguished from its predecessor by its single-frame grille and more shapely headlamps but a subtle redesign of the rear lights altered the rear view too. Audi continued with a soft top roof, arguing that the engineering compromises required to fit a folding hard top would force designers into all sorts of other knock-on issues regarding weight and packaging. The electro-hydraulically operated hood features a heated glass window and there was the option of a special acoustic hood with fabrics of greater density to further insulate the driver from wind noise. It makes the Cabriolet virtually as quiet as saloon with the roof up and is worth seeking out on the used market. Complaints about the rather stiff ride of the old model were taken on board and this Cabriolet features a modified four-link front suspension and trapezoidal-link rear suspension with extensive modifications to the shock absorbers, mountings and track rods utilising lessons learned from the development of the A6 and the S4 quattro models. The steering was also improved to offer more feel with Servotronic speed-sensitive power steering offered as an option on all but the entry level 1.8-litre model. Audi sells a good few cars on the quality of its interiors and the A4 Cabriolet's cabin isn't going to disappoint anyone unless they plan on carrying adults comfortably in the back. Get inside and there's the reassuring feel of solid build quality, with soft touch finishes and excellent ergonomics. The mark of a great car is its depth of engineering - how long and hard its designers have thought about how it's going to be used. The A4 impresses in this regard. 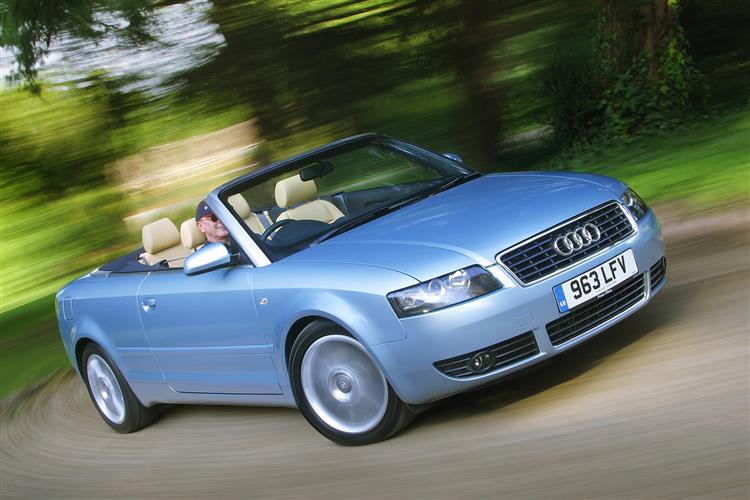