THREE FOR ALL (some text hidden)

The Mazda3 saw the Hiroshima company bringing a class-competitive family hatch to market for the first time in a number of years. The old 323, while interesting, was never really a challenger for the likes of the Ford Focus or Vauxhall Astra but with the 3, Mazda were right on the pace. The comparison to the Focus is apposite, for under the skin of the Mazda3 is the same basic chassis as the Ford, spelling handling excellence and offering the benefits of one of thee world's most rigorous development cycles. Used examples are now starting to filter onto the used market and given that the Mazda3 has been rather under-promoted, these cars represent very good value indeed.

The Mazda3 caught quite a few people by surprise when it debuted in December 2003. Most expected the Focus to be the first beneficiary of Ford's family hatch platform but instead the chassis got its first airing with a Mazda badge bolted to the bodywork. That's not to say the Ford and its Mazda cousin are alike in the way they drive - far from it. The Mazda felt a little softer and more luxury biased than the Focus, with even the Sport variants offering a very composed ride. The introduction of the Mazda3 was an integral part of an upturn in fortunes for the Japanese company. Turn the clock back five years and Mazda were in the doldrums with only the MX-5 showing genuine sales success. The introduction of the Mazda2, the Mazda6 and the RX-8 along with a redesign for the iconic MX-5 sees the company, under the financial stewardship of Ford, representing one of Japan's strongest car makers once again. The Mazda3 was initially launched in five door hatchback form with 1.4, 1.6 and 2.0-litre petrol engines as well as a 108bhp 1.6-litre diesel. Shortly thereafter a four-door saloon version was introduced, but this has remained of minority interest. Of more significance was the arrival of the 150bhp 2.0-litre diesel which gave the 3 some serious pulling power. In the summer of 2006, the Mazda3 had a bit of a facelift. The facelifted cars are extremely difficult to tell from the older models but there were tiny changes to the front grille, lights, alloy wheels and colour palette. All the engines bar the 1.6-litre petrol were tweaked to produce improvements in terms of emissions and fuel economy right across the range. The 2.0-litre petrol unit received sequential valve timing (SV-T) that boosted torque, while the entry-level 1.4-litre car also got improved valve timing gear. Soundproofing was enhanced as was the suspension and the facelifted models feel a little more focused (excuse the pun) on the road. The flagship MPS model arrived early in 2007 with a sobering 258bhp and performance to really give the established hot hatchback fraternity something to think about.

What You Getword count: 351

The shape gets the thumbs up right from the outset. Mazda's designers are currently in a bit of a purple patch and it's been a while since we've seen a clumsy shape emerge from the company's design studios. Think of it as a longer and sleeker looking Audi A3 silhouette and you're not too far off the mark. The chunky C-pillar is probably the most distinctive styling signature and the complexity of the design suggests it would have been very easy to get wrong, but the little Mazda pulls it off nicely. The bold V-shaped front grille speaks the latest Mazda design language although there are hints of other designs in the flanks and rear. The hips look very similar to the latest Astra design and the rear lights could have been purloined from SEAT. That said, it's a very cohesive shape that rests easily on the eye. The interior is very similar to the Mazda6 insofar as it offers a resolutely modern design with decent levels of equipment coupled with materials quality that's rather variable. Although the fabrics and leather trimming of the test car were beyond reproach, some of the dash plastics felt a little lightweight. The steering wheel and overlapping aluminium-rimmed dials look very sporting and there are some nicely detailed metallic touches dotted about the cabin. The minor controls on the centre console are all very easy to get to grips with and upspec models feature an LCD screen that rises out of the dash top to house functions such as satellite navigation. Interior accommodation is middle ranking, Mazda perhaps deciding that if customers in this price range really want to maximise the sheer amount of cubic inches available in the cabin, they'll likely opt for a mini-MPV. The Mazda3 isn't huge in the back and the small rear doors don't open particularly wide. Headroom is very good, despite the swoopy styling. The front pair of passengers should have no difficulty getting comfortable although one drawback of the thick rear pillars is somewhat limited rear three-quarter visibility when reversing or doing a 'lifesaver' check when switching lane. 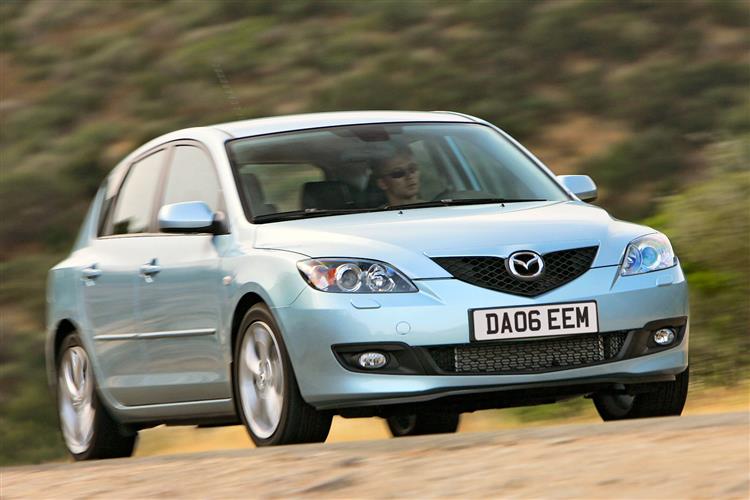