If there was ever such a thing as the invisible car, the Mazda MPV would be a pretty good contender for the crown. Few could visualise the shape, fewer still would know what the asking price was or how good, bad or average it is. The name said it all. Mazda MPV - shorthand for generic, unexceptional Japanese product. It's an endearing image to picture a bunch of disillusioned Mazda marketing executives charged with naming their new MPV. It's Friday night, the pachinko parlours and karaoke dens are calling and under the heading 'MPV' is a blank flip chart page where the creatives should be brainstorming names. Inspiration is not forthcoming. Leaving it until Monday is opted for, whereupon the boss has popped in and thought, "Mazda MPV - what a masterstroke" and had the promo material printed. It probably didn't happen like that, but it has served to sell the Mazda somewhat short. As long as you can live with the underpowered 2.0 engine, the Mazda MPV is a thoroughly thought through method of transporting seven in reasonable comfort. It's certainly not the laughing stock its somewhat Vauxhall Sintra-like looks may suggest. With the Mazda's residuals not holding up as well as its more successful rivals, a low-mileage MPV represents something of a bargain in a market where asking prices are usually pretty stratospheric.

The MPV doesn't have a great deal of history, in this country at any rate. There was a predecessor in Japan, a nasty slab-sided affair that did nothing particularly well, but we were fortunately spared this clumsy effort. The car that we received landed on these shores in October 1999, barely registered on the sales charts and has ticked over the odd few units in just one guise ever since. Given the MPV's conservative shape it's difficult to believe that it was introduced after the more radical Premacy, but a hole existed in Mazda's range that only a proper seven seater could fill, so introduced it was. Important changes arrived in the summer of 2002. The 2.0-litre engine was ditched in favour of a more potent 2.3-litre unit, whilst a common rail 2.0-litre diesel was added to the range. There were mild styling changes inside and out and unfortunately, prices rose. In late 2003 there was a further facelift. You can spot these models by the Mazda badge which was incorporated into the chrome strip atop the front grille.

The pre-2002 MPV comes only in one guise, powered by a 2.0-litre 121bhp petrol-driven four-cylinder engine with five speed manual transmission. Still, you do get plenty of equipment: electric everything, alloy wheels and a superb air conditioning system capable of producing separate climates at the front and rear. Like obvious Galaxy and Espace-sized rivals, the Mazda has versatile room for seven - and you can do all the usual kinds of things with the seating arrangements in terms of folding, removing and sliding things about. All but the front two seats can be individually removed and the middle three slide forward so that rear passengers (whose seats are fixed in place) can get in and out more easily. Pretty standard stuff then so far. Where the MPV does differ from the Ford or the Renault is in its use of a sliding door each side for rear passenger entrance and exit. True, it makes the vehicle feel a little more van-like, but for easy ingress and egress when you're tightly parked at Tesco, it's a better solution. In recent times, cars of this kind have come in for criticism on two main fronts. First, there's often a lack of luggage space: not much point in travelling seven-up if there's no space for anyone's baggage. Chrysler and Renault have responded by offering larger (and pricier) versions of their large People Carriers, but in the Mazda's case, this shouldn't be necessary thanks to 294 litres of large luggage space, even with all the seats taken. Should you take the rear two rows of seats out, this figure rises to 2745 litres. 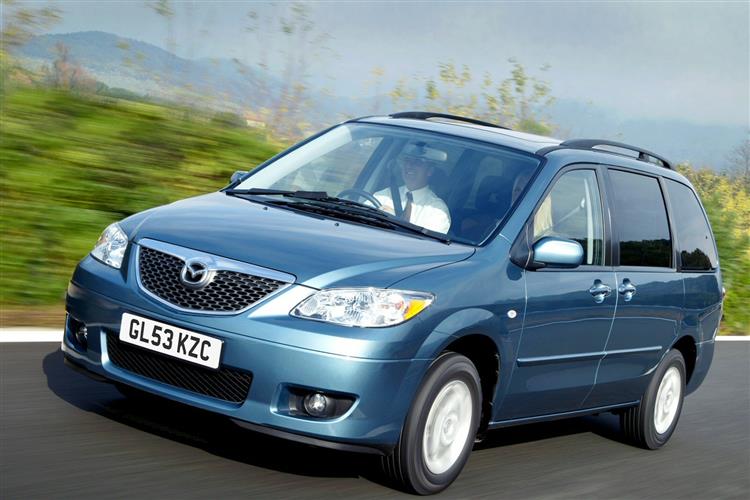