At the turn of the eighties, Audi was just another German manufacturer turning out worthy, but slightly dull family cars. The Quattro turned Audi around, giving it an enviable reputation for progressive thinking and high quality. It also revolutionised world rallying and rewrote the rulebooks on how cars should stick to the road. Alongside the Mini, the Audi Quattro is probably the most significant car of the post-war era. Why? The Quattro was the car that took four-wheel drive out of off-roaders and put it in a sports coupe. Automotive historians may well note that Audi weren't the first to do this, being beaten to the punch some years earlier by Jensen's revolutionary FF. The Quattro capitalised on its appeal by dominating world rallying, filtering its technology down into more prosaic cars in the Audi range and spawning countless copycat editions. It's only thanks to the Audi Quattro that we now have the Subaru Impreza, Mitsubishi Lancer Evo, Nissan Skyline, Porsche 911 turbo and Lamborghini Diablo - all equipped with four-wheel drive. 'Legend' is a hackneyed expression, but if any car deserves this title, it's the Audi Quattro.

The Geneva motor show in 1980 was the arena for the launch of several impressive cars, all of which were completely steamrollered by the column inches devoted to Audi's sensational Quattro. The Ur (German for 'original') Quattro had a 2144cc 5-cylinder turbocharged engine that generated 200bhp and was able to sprint to 60mph in 7 seconds. Using a relatively simple system of electromagnetic differentials to deploy the drive to all four wheels, the car went on sale in the UK the following year, available only in left hand drive. In late 1982, right-hand drive Quattros began to appear, and the following year the early twin-headlamps were phased out in favour of sleeker single units. In a move that was mirrored with the Audi TT in 1999, Audi also made small adjustments to the rear suspension to make the back of the car slightly less of a handful. 1984 saw the introduction of the unpopular talking digital dashboard, Bosch ABS brakes, uprated springs and dampers and more purposeful 15-inch alloys. A comprehensive revision to the car took place in 1985. The original lines, as styled by Englishman Martin Smith, were facelifted slightly, and the engine was expanded to 2226cc with a smaller electronically controlled turbocharger keeping the power the same but virtually eliminating turbo lag. The talking dash was finally muted, but the key change to the car, however, was lurking well beneath the now-familiar boxy lines. A Torsen (torque sensing) differential was fitted, which acted in a far more 'intelligent' manner than the old diff, which merely directed half the drive to the front wheels and half to the rears. With the Torsen centre diff, the Quattro could now direct up to 75% of the drive to the pair of wheels most able to deploy it cleanly. This massively increased the already prodigious levels of grip and preserved Audi's superiority over a host of me-too copycats from rival manufacturers. In 1989, with the Quattro nearing the end of its production run, Audi produced a car that enthusiasts have clamoured after ever since. The Quattro 20v had, as it's name suggests, a twenty-valve cylinder head, boosting power to 220bhp. The interior was notably more luxurious than in previous models and it remains the definitive mainstream Quattro model, lasting as it did until late 1990. 'Mainstream' is a term chosen deliberately, as in 1984, Audi released a series of 200 Sport Quattro specials. At £51,000 apiece, the Sport Quattro was, and still is, a very serious undertaking. Boasting 306bhp and with a wheelbase a foot shorter than the regular Quattro upon which it was based, the Sport Quattro was built to combat the Group B rally threat from the Peugeot 205T16 and the Lancia Delta S4. Only around 20 ever made their way to these shores, and they don't come up for resale too often.

With an Audi Quattro, what you're getting is the original, and, many would argue, the best. The years haven't taken the edge off the performance - in fact a Quattro 20v has been measured as quicker than a modern Nissan Skyline GT-R R34 around a wet handling circuit - but the view from inside still feels resolutely eighties, with the boxy dashboards and skinny pillars reminding you of the car's vintage. What's perhaps forgotten about the Quattro is its practicality. Despite competing for sales with the Lotus Esprit and Porsche 911SC, the Quattro is far less demanding to live with, boasting a fair size boot (despite the coupe shape it isn't a hatchback), good head and legroom in the rear and a cabin that's airy with good all-round visibility. It's this lack of intimidation that helps make the Quattro so easy to drive quickly. Equipment levels are relatively high (for a German vehicle at least), although the later 20-valve cars were considerably better specified. Standard equipment included ABS, leather trimmed seats, electric windows, central locking, sunroof and remote control door mirrors. If you're used to CD auto-changers, air conditioning, stability control and sat nav, you may have to wind the mental clock back a few years! 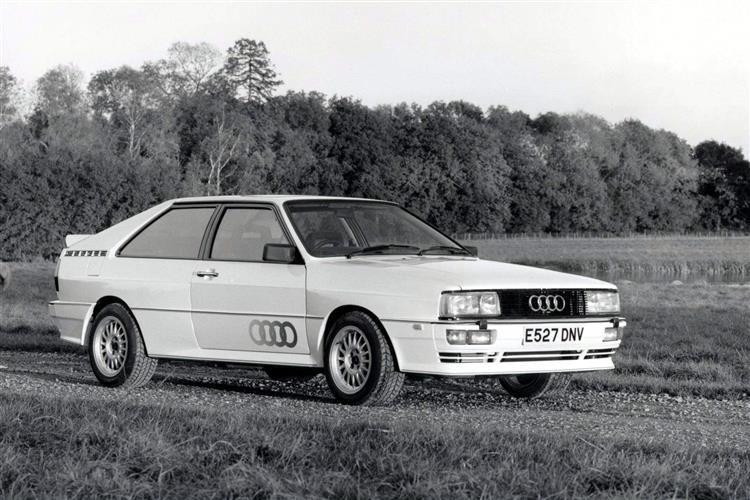