The Chevrolet Camaro, part of an American tradition of 'pony cars' which includes the Ford Mustang and Pontiac Firebird, offers enormous bang for your buck. Whereas its big brother, the Corvette, has always had critical acclaim in the UK, the Camaro has always been largely ignored. As a used purchase, a Camaro promises unrivalled performance per pound, but is there more to building a performance car than an ability to wheelspin in third gear? Find out here.

Launched in the UK in 1998 after basking in the reflected glory of the acclaimed Corvette C5, the Chevrolet Camaro was offered in three styles, Coupe and Convertible versions fitted with a 3.8-litre V6 and the V8-engined Z28 coupe. With the steering wheel on the left, appeal was always going to be minor, but a new list price of under £19,000 for the V6 coupe aimed to keep sales above a trickle. Treated to a savage mangling at the hands of the British motoring press, the Camaro suffered something of a culture shock. In America, the Camaro had a history to fall back on; a whole demographic group had grown up with it, the car and the culture meshed. Introduced in 1966, it was an instant hit, straight away generating 10% of Chevrolet's total sales. Camaros of the seventies had an ugly, gritty urban image, no-nonsense cars with a bad attitude and worse handling. In the eighties it all went awry and the Chevrolet's pony car was emasculated and best forgotten. Going fresh into a market like the UK, where established buying patterns favoured small European and Japanese sports coupes, the Chevy looked like a fish out of water. It was reminiscent of the time baseball star Sammy Sosa stepped out for a photo opportunity at Lord's cricket ground. No one was quite sure who he was or what he was doing there. The Camaro suffered a similar fate.

You get an appreciation of quite how 'foreign' the Camaro is in the British market when you try to nominate a natural rival. Big, cheap, powerful coupes don't tend to figure in the British car-buyer's vocabulary. In terms of straight-line performance, a Subaru Impreza or Lotus Elise compare with the Camaro Z28, but there wouldn't be much of a crossover from those buyer types. The only cars with a remotely similar appeal in this bracket are the Volvo C70 and the US-built Honda Accord Coupe, but even then the link is tenuous. First impressions of the Camaro won't set the pulse racing. It looks big and heavy, the long front and rear overhangs don't promise nimble handling, and the whole image is vaguely redolent of a modernised car from the early Toyota Supra/Mitsubishi Starion era. Climb aboard and the impression is reinforced. Peer over the big bulky steering wheel and the acres of bonnet stretching away kindle unwelcome memories. Gazing at that vast hood, (acclimatising fast) a word slowly forms in the mind, and the word is Capri, before the unwelcome image is banished. The Z28 version tested has the usual slab fronted American style fascia with built-in stereo system, huge buttons conjuring up images of big Texan fingers jabbing at them whilst sipping from a bucket of root beer. Equipment levels are predictably good, as are the standard safety features. Twin airbags, ABS and a bodyshell strong enough to ensure that anything hit stays hit make the Camaro a safe car - for its occupants at least. All models boasts traction control, air conditioning and alloy wheels whilst leather upholstery and electric front seats proved to be popular options. The Coupe models come with the option of targa lift-out roof panels. Automatic gearboxes are standard fitment, with an option of a five-speed manual on the V6 and a really rather good six-speed manual on the Z28. 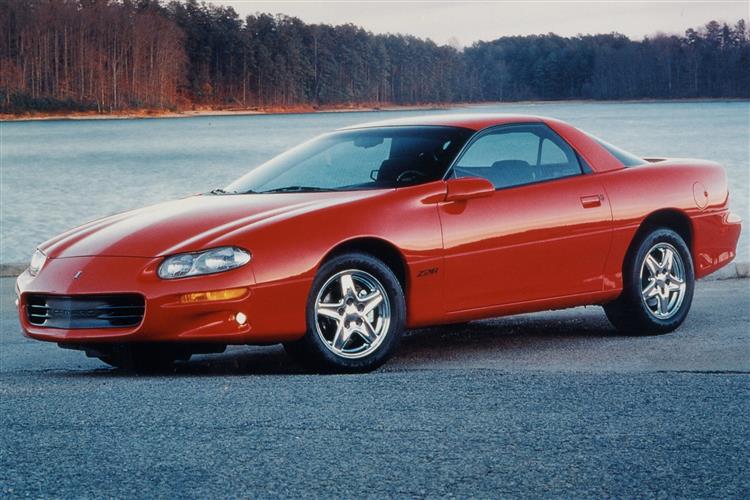