Premium quality was the concept behind Audi's original A3 range. The Ingolstadt company have never subscribed to the fact that small car equals small status, and the A3 has the quality feel of a far larger car. Everything is firmly screwed together and high quality materials are used throughout. For this privilege the A3 commands a higher price than its VW Group siblings, which brings it into competition with far larger opposition. However, we all know what comes in small packages.

Many observers thought that the Audi A3 would simply be a sawn off A4, much as BMW had done with their Compact range, but the styling was fresh, chunky and well received. It carried forward the high-waisted good looks of the old Coupe but with a squat, purposeful stance that looked good from every angle. At the time of the A3 launch in September 1996, seven models were initially available. The base 1.6-litre model with a 4 cylinder 101bhp engine was joined by the more luxuriously-appointed SE version and the 1.6 Sport which, you've guessed it, was sportier with racy wheels, uprated suspension, bucket seats and sports steering wheel. The same trim levels were carried by the 1.8-litre range of cars. which utilised a four-cylinder unit, developing 125bhp in this instance. At the top of the range was the 1.8T Sport, which was fitted with a turbocharged 150bhp version of the 1.8 litre engine as seen in the Golf GTi. Despite Audi's loyalty to four-wheel drive, all of the first wave of A3s were front-wheel drive, and all were offered with a four-speed automatic option. In August 1997, 1.9-litre turbodiesel engines were introduced. These units developed 110bhp and were available in the same base, SE and Sport trim designations as the petrol engined cars. A small round of revisions was made at the same time consisting of front side airbags and an improved RDS audio system. In August 1998 high security locks and, remote central locking were added to the line-up. In keeping with Audi's devotion to the 'quattro' system, the A3 1.8 T quattro Sport was launched in July 1999. This model ran an uprated version of the 1.8-litre turbo engine, developing 180bhp. Many saw it as a taster for Audi's eventual A3 range-topper, the S3 quattro. This model stretched the power of the 1.8 turbo engine still further to 210bhp and gained a subtle but muscular body makeover. July 1999 saw the launch of a five-door option on all models bar the S3 quattro and also the introduction of 1.9 TDi 90bhp models to slot in beneath the existing diesel engined cars. The 90bhp diesels were offered in base and SE guise. The 90bhp diesel was firmly knocked on the head in 2001 when the A3 range underwent a series of revisions, with the lights and grille being facelifted. In came 100bhp and 130bhp 1.9-litre turbo diesels, punting the A3 range towards the top of the fast expanding diesel market. In early 2002, the S3 model was given a power hike from 210bhp up to 225bhp. This A3 was replaced by an all-new model in summer 2003.

Call it chic, arriviste, unruffled, whatever, the Audi A3 exudes effortless cool. The interior is not that spacious, but buyers will put up with that to sport the four interlocking rings on the grille. That symbol has come to represent independent thinking and an insistence on spare, thoughtful design. The A3 range typifies this approach. All models wear stylish alloy wheels, and are supplied with driver, passenger and front side airbags. The first impression is that there's a lot of plain black applique dashboard on display, but look closely and all of the controls are apparent, tidily clustered and dripping with quality. Flick any switch, press any button and Audi's investment in the A3 stands out clearly. Even the grab handles are silicon-damped for a smooth return. Sport models are perhaps the most attractive, with their tastefully dynamic appeal. The SE models will have all but rear seat passengers checking twice to make sure they're not in a far bigger A6. Luxurious touches run to twelve-spoke alloys, Alcantara upholstery, electronic climate control and remote central locking. Even the key is beautifully designed, a chunky black transponder into which the key blade slots like a flick knife. 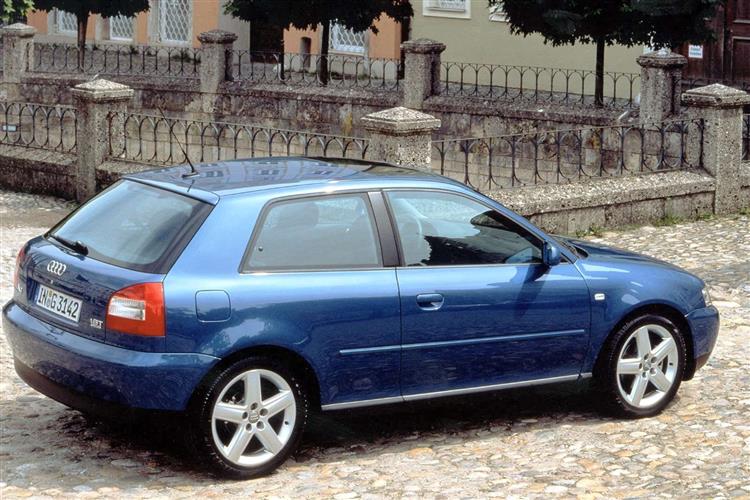