It's a little odd to think that a good quantity of classic Porsches are soft tops whereas these days a 911 with a fabric roof is seen by some purists as decidedly infra dignitatem. Let the elitists mutter. Any 911 is enormous fun and the dynamic sacrifices made in bringing the Cabriolet models to market are a good deal smaller than many of the naysayers realise. Besides, anything that gets you a bit closer to that intoxicatingly breathy engine note has to be a good thing. Right?

It's easy to forget that Porsche has a long and illustrious history with topless cars but the 911 seems to have been unfairly exempted from that lineage. You'd have thought that a bloodline going back over quarter of a century would cut the 911 Cabriolet a little slack but there are still many who think a topless 911 is a 911 that's been butchered. Thing is, these folks tend not to have driven the latest 911 drop tops. In its current 997 guise, the Cabriolet models are simply excellent and lose vanishingly tiny quantities of dynamic purity to their hard top siblings. To put this car into perspective, we first need to wind the clock back to 1997 and the introduction of water rather than air cooling. The model that ushered this change in was the 996 generation (latter day Porsche models having a three number 'code' to denote their model type. For example an early Boxster is a 986, a late one a 987 in Porsche speak). The '996' marked a shift in Porsche's development of the 911 range. The 996 also did enormously well for Porsche and survived fully seven years before the model we examine here, the 997, was launched. Where the 996 was revolutionary, the 997 is more an evolutionary finessing of the 996 theme, tidying up the styling, imbuing the car with a higher quality, more technologically dense feel and adding even more exciting models to the mix. The Cabriolet models debuted in December 2004, with both two and four-wheel drive variants in both standard guise and more powerful S trim. A six speed manual gearbox was offered as standard with the later option of a Tiptronic S auto transmission. The range was augmented in summer 2007 with the addition of the Turbo Cabriolet. In mid-2008, Porsche announced a revised range featuring their new Direct Fuel Injection (DFI) engine. Buyers could also specify the revolutionary PDK semi-automatic gearbox, offering manual pleasure with automatic convenience. There were also a series of very subtle styling changes. These included larger rear view mirrors, newly-designed 18-inch and 19-inch wheels and new lights featuring LED technology.

The 997 Cabriolet's hood system is a good deal slicker than the old 996 soft top, featuring as it does an improved folding mechanism. A button can open or close the roof in twenty seconds, the hood now folding into the roof compartment with the heated glass rear window facing upwards for added protection. One of the best parts about the hood is that it can be raised or lowered at speeds up to 31mph which means that should the traffic lights change while you're half way through raising or lowering, you won't need to wait with a queue of laughing/swearing drivers behind you. Improved guide ducts above the doors direct rainwater into a specially developed channel in the windscreen pillar and an improved wind deflector reduces buffeting in the cabin while cruising. In order to ensure torsional rigidity, soft-top conversions need a degree of additional reinforcement and this often adds to the weight to such a degree that performance is blunted. No such issues with the latest 911 Cabriolet. It tips the scales at a mere 85kg more than its hard top sibling. Even accounting for all the strengthening and electric motors for the roof, that's less than the weight of an average chap. 911 purists will be glad to see a return to the 993-style round headlamps, the so-called 'runny-egg' smeared on lamps of the 996 being consigned to history. The wheelarches are pumped up to accept the Carrera's 18-inch wheels and the 19-inch wheels of the Carrera S giving this 911 a voluptuous coke-bottle profile. The wheelbase of the car remains unchanged at 2350mm but it's slightly shorter and a few centimetres wider. The easiest way to tell the two models apart is that the Carrera has a pair of oval tailpipes whereas the S model sports a quad set of exhausts. That and the badge on the back. 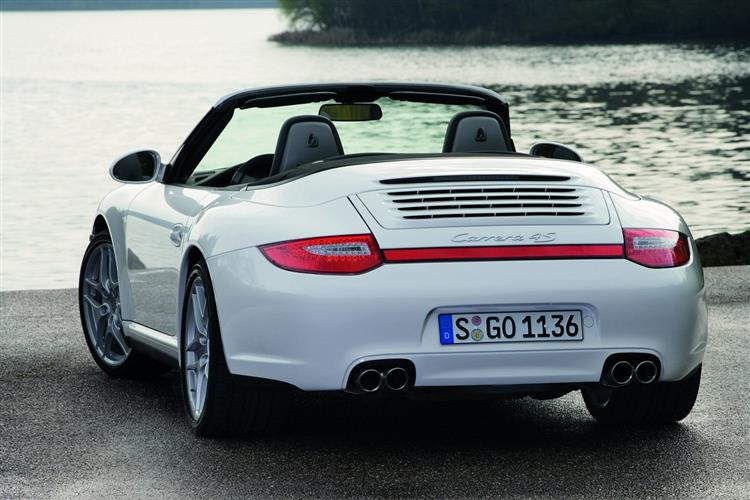