GO SOFT IN THE HEAD THIS SUMMER (some text hidden)

As Convertible cars become ever more sophisticated and expensive, dazzling with us with their clever folding hard tops and dizzying electronic gadgetry, it's tempting to remember a time when things were a whole lot simpler. A lively engine, a simple ragtop and a frenetic ride really lets you know you were in touch with the elements. If you want a touch of old school Italian charm, Fiat's Punto Cabrio could be just the tonic. With used examples starting very inexpensively it's not as if you're likely to lose your shirt.

The Punto Cabrio debuted in August 1994 in 1.6-litre 90ELX guise. This model was sold until May 1997 when it was discontinued and replaced with the 85 ELX. Although down by 4bhp, the 1.2-litre multi point fuel injection engine was far more efficient than its predecessor. A driver's airbag and seatbelt pretensioners were added with the option of alloy wheels, metallic paint a passenger airbag and air conditioning. This model remained on sale until the Punto was replaced by an all-new model at the end of 1999.

FUN - in capital letters. That's what Fiat's Punto Cabrio is about. But what of that styling? You'll still either love it or hate it - no in-betweens. My only observation is that it has always looked far better in the metal than in the photos. Fiat designed the original Punto as a cabriolet right from the outset, so the car is strong enough to negate the need for the unsightly rollover bars that you'll see on soft-top hatchbacks like VW's Golf. Instead, there's a clean line from windscreen pillar to tonneau cover, all of which improves the driver's visibility as well as looking great. Should the worst come to the worst and the car roll over, those windscreen pillars are a lot tougher than they look and will withstand more than twice the car's weight. 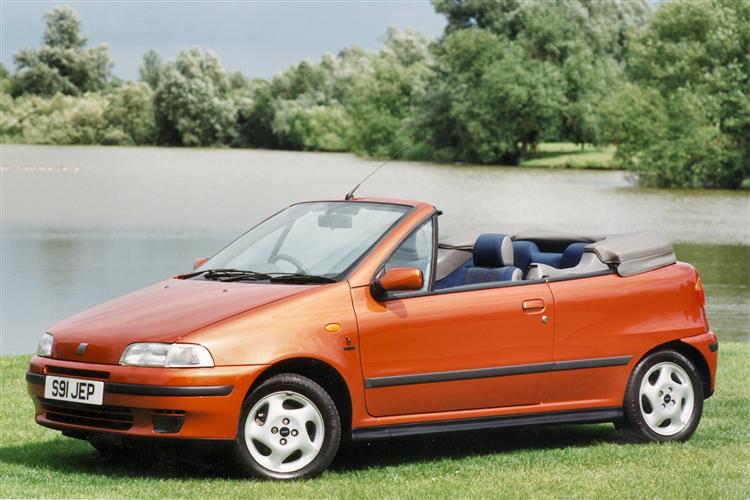