The story goes that when the first Fiat Cinquecentos rolled onto the showroom floor of one local dealership, an eager customer waved a cheque under the head salesman's nose. "I'd like one of those chubby-checkers please... " Ever since then, the cute numerical Italian name (translated as '500' and pronounced 'ching-kwee-chento' by the way) has provoked tongue twisting at Fiat dealers from Lands End to John O'Groats. Not that it appears to have put customers off. In the UK, sales of the little city car proceeded very nicely, thank you, and the result is that many examples now appear on the used market at tempting prices, many of them part-exchanged for the later Seicento.

Two versions were initially offered at the May 1993 launch - the standard model and the better-equipped SX. Both had the same economical sub-one-litre engine and 'chuckable' handling. There was an interior restyle in January 1994 and a new model was added in February the following year. This was the Sporting and it brought with it a new 1.1-litre engine. The styling was modified with a large air dam built into the front bumper and tiny alloy wheels were standard that gave it a sporty, if diminutive appearance. The base model was renamed S in June 1995 but the rest of the range stayed as it was. The Cinquecento range was replaced with the Seicento in summer 1998.

What You Getword count: 101

A fantastic city car, especially the Sporting, which is very zippy and charges into gaps that only a Mini could challenge it for. The other Cinquecentos are much slower (0-60 is a paint-drying 20 seconds) and less likely to get you revved up and grinning from ear to ear as you negotiate roundabouts. Standard equipment extends to central locking, sunroof and electric windows on the SX and Sporting. The mini-hot hatch also gets sports seats, a rev-counter and a choice of either bright yellow or red paint, though for would-be dark and mysterious types, a deep black lustre is also available. 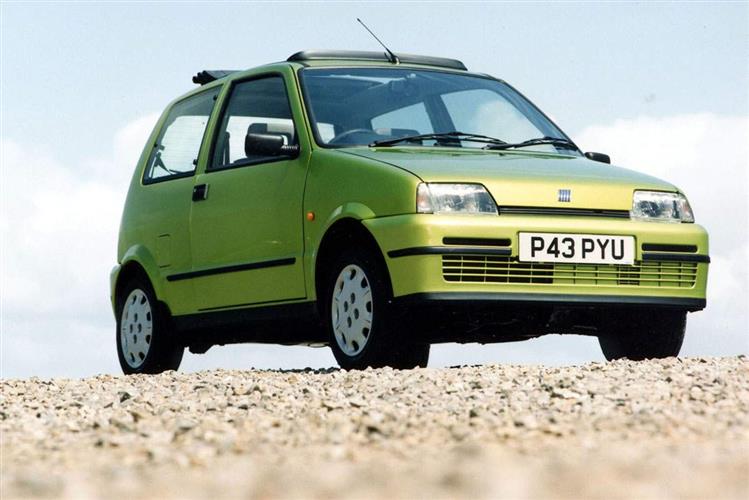