The smiles on the faces of Audi executives at the 1997 press launch carefully hid a touch of nervousness. Their latest A6 was the first to be designed from scratch wearing the badge - its predecessor was a lightly re-touched and re-named 100 - and the striking shape of the latest car could have alienated as many buyers as it attracted. It didn't. Even though business buyers in BMW 5 Series and Mercedes-Benz E-Class territory are notoriously conservative, the A6 had to be different to offer a real alternative. And it was, particularly in four-door form. Did a saloon really have to look like a saloon? Or could it be a touch more provocative with a roof line more akin to a sporty coupe? Characterful? Even in-your-face? Audi said 'yes' and the executive establishment decided the same. This A6 became a relatively common sight, giving its German rivals a run for their money on the British showroom floor, executive car park and motorway. So there are plenty of fine examples on used forecourts, too.

Sleeker, lighter, safer and more spacious than its 100/A6 predecessor, Audi's senior executive express pulled into Britain in May 1997. The range was relatively simple with even the starter engine an excitable 1.8-litre four-cylinder turbo but the 2.4-litre V6 proved most popular. Like the larger 2.8, the 2.4 came with manual or automatic transmission, both with five speeds, and the self-shifter also offered Tiptronic clutchless manual operation at the driver's whim. The 1.8 had a more conventional four-speed auto and early 2.8s offered the choice of two wheel drive or quattro 4WD. Trim was either a lavish 'base' specification including twin airbags and climate control air conditioning or SE with alloy wheels, trip computer, front centre armrest and numerous other enhancements. Subsequent changes were discreet - put a personalised plate on your used A6 and the neighbours could think it's one of the last of line 2004 cars. Late 1997 saw the arrival of a 150bhp 2.5-litre V6 turbo diesel engine, with or without quattro 4WD, while the Avant estates arrived in May 1998, matching the saloons model for model. The mighty 295bhp 4.2 V8 quattro saloon debuted (with the A8's engine) in February 1999 and a 230bhp 2.7-litre V6 turbo saloon followed in June. Around this time the 2WD 2.8s were dropped, a clever new six-speed CVT 'Multitronic' automatic gearbox was introduced and interior fabrics and equipment were slightly revised. Late in 1999, the twin-turbocharged 4.2-litre V8-powered 340bhp S6 flagship auto-only model made its debut. Early in 2000, TDI quattro models were replaced by a 2.5 TDI quattro Sport variant with power up from 150 to 180bhp. 2001 saw a further revision to the A6 range. The 'double radiator grille' that previously only adorned the range-topping eight-cylinder A6 models was adopted across the range as were clear glass headlamp covers, whilst the standard lights were increased in size. The rear lights came in for a makeover too, with the reversing lights made almost cylindrical in appearance, and visible tailpipes made an appearance. The engine and transmission options multiplied. Two new petrol engines were available; the 2.0-litre 130bhp four-cylinder unit and the 3.0-litre V6 that developed 220bhp. The 2.4-litre engine gained 5bhp to 170bhp. Big revisions were made in the provision of diesel engines. Out went the 115bhp 1.9-litre TDI engine, replaced by the gutsier 130bhp, and in came a 2.5-litre V6 TDI unit developing 155bhp, slotting in beneath the muscular 2.5-litre TDI 180bhp engine that headed up the diesel range. In summer 2002 the 155bhp 2.5-litre diesel received a small boost up to 163bhp. At the same time the Sport variants were given a boost to their equipment list. The grand finale for this A6 came in the spring of 2004 with the unveiling of the RS6 Plus Avant, a limited edition car with 480bhp. The next generation A6 was on sale by the summer of 2004.

What You Getword count: 230

Sleek looks, great engines, a well-sorted chassis and top-notch active and passive safety systems are all found here. If you want more luggage space, check out Avants; for icy driveway grip, look at quattros. The equipment tally is complete too. Perhaps more significant, however, are the little touches. There are no fewer than 20 different interior lights and the seats are composed of several layers of various softness on a firm base so that they feel pliable but supportive on longer journeys. Every model has an electronic differential lock (EDL), plus ASR traction control (and ABS of course). If that's not enough, the options list offered a dictionary of acronyms - EBD, DSP, VTG and so on. Plus ESP, an electronic stability programme that, in panic situations, automatically decelerates selective wheels separately, preventing the car from skidding and fishtailing. To be honest, if you habitually find yourself in situations where ESP is likely to be of use, the A6 may not be your sort of car. All the high-tech gadgetry in the world can't hide the fact that it's front, rather than rear wheel drive, the class norm. Rear-driven cars are supposed to be more rewarding if you push them to the limit, a point proved by equivalent BMW 5 Series models, but refuted by the surprisingly dull Mercedes E-class of the same era. The A6 lies somewhere in between. 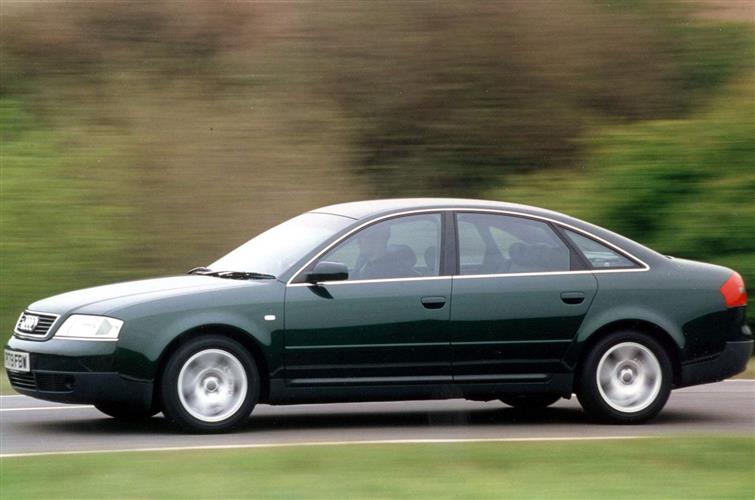