To many, the Audi TT is an aspirational bauble of aluminium detailing, casually oozing post-millennium European cool, effortlessly dripping with the Bauhaus architectural design cues popularised by Gropius in the 1930s. Others will see it as a grotesquely mutated Volkswagen Golf. Whichever camp you reside in, the Audi TT can't be ignored and it has proved an important model for Audi, not only as an image builder, but also as a sales winner in its own right. The sort of scares over its high-speed handling that would have severely dented the used values of many other cars barely caused a ripple on the TT's residual values when they surfaced in 1999. With approved modifications to cure this alleged instability at speed, the car is rock solid: without it's certainly lively.

The Audi TT was first displayed to the world at the 1995 Frankfurt Show. Whilst it made an impressive show car, few reckoned on Audi's resolve to try to put as much of the prototype that rotated on its shiny turntable into a production car. Indications that this was indeed the case surfaced sporadically throughout the following three years until the car was unveiled to an astonished press in 1998. Official UK sales of the car began in February 1999, and such was the clamour to get hold of the TT that many paid double the asking price for early left-hand drive European models. Two models were made available, the 180bhp and 225bhp coupe models. Both had an engine based on the 150bhp 1.8T engine used almost everywhere across parent company Volkswagen's empire, but the 225bhp version mated its unit to a six-speed gearbox. Both cars boasted quattro permanent four-wheel drive, borrowing the Haldex centre differential system from Volkswagen Syncro models. Externally the TT 225 was distinguished by its twin exhaust tail pipes. In August 1999, roadster versions of both TT models were made available. This launch was overshadowed by a growing number of reports calling into question the high-speed stability of the TT following a rash of accidents. Audi responded swiftly, recalling all cars and fitting them with modified shock absorbers, anti-roll bars, a rear spoiler and, latterly, the ESP stability control program. Many industry observers quietly doubted whether any of these changes were in fact necessary. The common belief was that due to its looks, many buyers who wouldn't normally be attracted to an admittedly animated high-performance coupe were purchasing the TT and driving the car well beyond the margins of their skills. In autumn 2000, the TT 180 received the six-speed gearbox that was previously only available in the TT 225, enabling more relaxed and economical high-speed cruising. A more extrovert range of colours was also unveiled, finally putting an end to the complaint that the TT was sold short by the range of dowdy tones available. Audi landed themselves in hot water again in late 2001 when they launched the TT S-Line special edition, a version that boasted bigger wheels, uprated suspension and a few styling tweaks. Charging over £30,000 for this car and promising that only 200 would be built, they subsequently introduced many of the S-Line 'exclusive' features onto the mainstream TT range and were then forced to refund many irate S-Line customers their premiums. Spring 2003 saw a significant addition to the TT line up in the form of the 3.2-litre V6 Coupe. With 247bhp on tap, this version was offered with an innovative twin clutch system to ensure seamless gearchanges. At the other end of the range, a budget 150bhp front-wheel drive version of the roadster was introduced and the 3.2 V6 was extended to the Roadster model in early 2004. The hottest TT arrived in the spring of 2005. It was called the quattro Sport and it used a 245bhp version of the 1.8T engine. Identifiable by its black roof and with only two seats inside its stripped out interior, this is a hardcore TT for track day fans. In August of 2005, power boosts were announced across the TT range. The entry-level 180bhp model received 190bhp and the 225bhp car was discontinued with the 245bhp quattro Sport taking over as the four-cylinder flagship. The 150bhp roadster was also upgraded to 163bhp.

The TT is one of the most conspicuously styled cars of recent years. Everything about the design of the interior and exterior has been created with function first, but visual impact a very close second. Slide into the drivers seat and other cars instantly seem very bland. Inside, as would be expected of Audi, everything is soft touch, beautifully damped in a motif of retro-cool aluminium, industry-functional rubber and taut, shiny leather. Every switch has a well-oiled motion, a solid detent and hidden 'surprise and delight' features that betray a worrying attention to detail amongst Audi engineers. Depress the aluminium throttle pedal to the floor in one fluid movement and - click - metal on metal; an exemplar of the surgical excision of mush or flab that marks the TT. At a standstill, there's no debate; the TT leaves its rivals floundering. The coupe is rather tight on the inside, with a notice on the tailgate warning rear seat occupants that if they tower above the height of 4'11'' their heads will smash through the rear screen when the tailgate is closed. Up front, the turret-slit windows and low seating position can feel slightly claustrophobic, and in town a TT would never keep up with a briskly driven Audi S3 - all round visibility is just too poor. Want to anger a TT driver? Just let them go first at a traffic light queue. There you will witness Darwinism reversed, as human momentarily becomes Galapagos tortoise, neck craned forward in a desperate attempt to see the traffic signals. Luggage space in the rear of the coupe is pretty impressive, especially with the rear seats folded, certainly shaming other coupe rivals such as the Alfa Romeo GTV in this respect. The roadster model is very impressive indeed, although the decapitation process has radically altered the essential character of the car. The sleek swoop of the roofline has gone, replaced by a well sculpted but chunky hood that gives the car a profile that best resembles a Tonka rendering of a Porsche Boxster. Hood down, the car maintains it's aggressive, almost caricature, buggy look. The wheels appear larger, the frontal aspect more bullish and the unfashionable lack of tension in the flanks suddenly becomes a laudable design aspect. The options list is long and includes a curious baseball glove interior styling package that sees the upholstery trimmed in butterscotch leather with bright yellow stitching and threaded together with yellow leather tape. Whilst more reminiscent of something rejected on the grounds of bad taste by Gene Autry and almost totally lacking in lateral support, it's proved popular. The hood itself is not as slick as rival offerings from Mercedes or Porsche and although single skinned, is built to an impeccable standard, resisting wind noise admirably. A thoughtful touch is the electrically operated glass wind deflector that slides up between the seats, protecting the occupants from buffeting. Look at how slick this is, and then compare it to the system on the Volvo C70 convertible. Then you'll realise why people want TTs so badly. 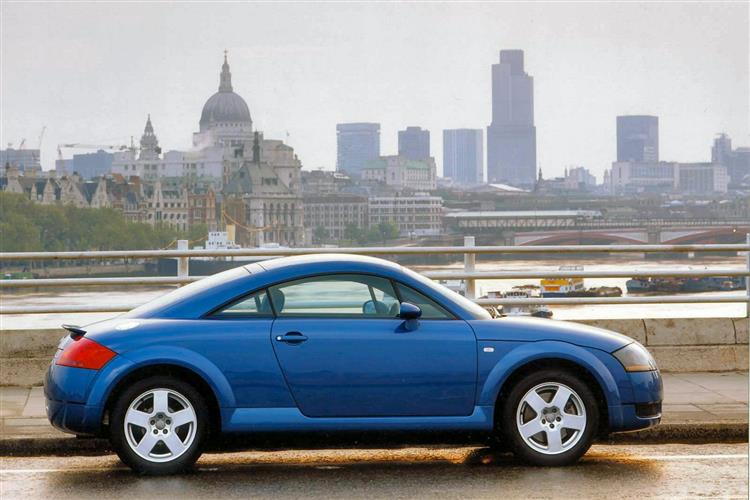