In 1938 Hendrick Goosen, whilst fishing off the coast of Madagascar, hooked a coelacanth, a 'living fossil' of a fish that was supposed to have become extinct 400 million years ago. You can experience a similar feeling by test-driving a used Porsche 928 GTS, a true dinosaur amongst performance cars. Unlike a coelacanth, a used 928 is fitted with a 5.4-litre engine, generates 340bhp and will still look good in twenty years time. In common with its fishy forebear though, it has benefited from years of development whilst being largely ignored by Madagascan fishermen. Which means that tracking down a good used example is easier for the likes of us. Here's how.

In May 1992, the Grand Touring class was taking a bit of a hammering. The overblown BMW 850 was about as welcome as a bailiff's visit, the Jaguar XJR-S was struggling in its death throes, as was Mercedes' venerable SEC model. Porsche, having campaigned with the 928 since 1980 looked at the culture of the caring, sharing nineties, pondered the inexorable rise of fuel prices and promptly launched the 928 GTS, a car with more of everything. More power, up from 5.0-litres to 5.4-litres, more grip, more attitude, more speed, but understanding that less could be more, it was also granted less relevance. The market realised the 928 was on its last legs and promptly went out and bought 911s instead. Porsche continued offering this 340bhp behemoth for three more years, fitting a driver's airbag in 1993, before finally admitting defeat and axing the 928 series in January 1995. At the time few mourned its passing, but history may yet be kind to the 928. As successive generations of Porsche 911 get more civilised, more powerful and more refined, it's not difficult to sit behind the wheel of a 2001 model year 911 Turbo and imagine that the driving experience isn't that far removed from where Porsche were going with the 928. Park a 1992 911 and a similar vintage 928 GTS next to one another and the 911, with its upright windscreen and Beetle-esque fascia looks like a museum piece, whilst the 928 still looks fresh. With prices on the crest of a slump, buying a used 928 GTS might be a canny way of getting a big portion of Porsche for Mazda money.

The V8 engine is almost worth the upfront payment on its own, but what do you get thrown in with it? The body shape is undoubtedly the best looking of all the 928 variants which is perhaps surprising, as when most cars get older they become tarted up in the most questionable manner. The last of the Jaguar XJR-S models are a case in point, facelifted until their sump plugs sit on the grille. The GTS looks considerably sportier than any other 928, with a shape that's all power bulges, welts and aggression, with just the right amount of cool Porsche branding. Not too eighties, in other words. The 17-inch five-spoke alloy wheels are shod with enormous 40-series Bridgestone tyres that appear to stand proud of the wheelarches, giving the GTS a cartoon character attitude. The sporting intent is reinforced by the fact that a manual gearbox was a standard fit, with automatic an optional extra. Inside, it's a mixed story. There are some genuinely nice touches, like the way the instrument binnacle moves with the steering wheel when you adjust it up and down, but do make sure you avoid some of the more lurid colour schemes. Best to opt for classic black leather and carpeting. Space is good up front, and the dash design doesn't betray the car's antediluvian origins too badly. If you want to get in the rear, you'll probably need legs that are less than two inches in diameter, else you'll need to sit sideways. And remember to duck when the tailgate closes, else you could find yourself wearing the rear screen as a hat, which as the Audi TT has shown us, is very This Year. 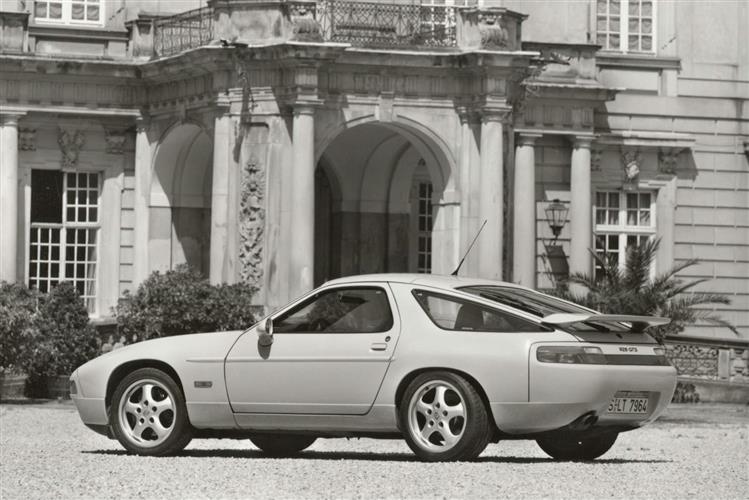