If the 996 generation of the Porsche 911 was the period when the car matured, the 997 series saw the car develop an even more polished sheen. Where it was once quite easy to see the Volkswagen DNA in Porsche, by the time the 997 was launched in 2004, Porsche had diverged so far from its rather basic sporting car roots that the 911 had become a technical tour de force and, in Carrera 4 guise, one of the most devastatingly effective all-weather cars in existence. Used examples of the 'C4' are now starting to appear and represent a cost effective way to buy supercar capability at upmarket sports coupe prices.

The Porsche 911 Carrera 4 traces its roots directly back to the groundbreaking 959 Gruppe B design study that debuted in 1983 at the Frankfurt Motor Show. Way ahead of its time, the 959 featured twin turbochargers, active aerodynamics, automatic ride height adjustment and Porsche-Steuer Kupplung (PSK), easily the most technologically advanced all-wheel drive system of its era. Where most four-wheel drive systems such as Audi's Quattro used a fixed torque split, PSK could automatically direct the torque distribution between the rear and front wheels in both normal conditions and slip conditions. With as much as 80 per cent of available torque going to the rear wheels under hard acceleration, PSK made the most of the 959's rear-engined traction advantage. Porsche suddenly came from nowhere to being kings of all-wheel drive sports cars. The first four-wheel drive series production Porsche was the 964-generation 911 Carrera 4 which debuted in 1989. Although these models were critically acclaimed, the public still thought that rear wheel drive was the only layout for a 'proper' 911 and the 964 Carrera 4 was perceived as slightly second rate, almost a 911 for timid drivers. The 993 and 996 generation cars cemented all-wheel drive's role in the Porsche firmament, acceptance finally arriving when the Turbo version of the 993 featured drive going front and rear. Many observers felt the 996 Carrera 4S to be the finest mainstream model Porsche produced of its era. The 996 did enormously well for Porsche and survived fully seven years before the model we examine here, the 997, was launched. Where the 996 was revolutionary, the 997 is more an evolutionary finessing of the 996 theme, tidying up the styling, imbuing the car with a higher quality, more technologically dense feel and adding even more exciting models to the mix. At first, just rear wheel drive 3.6-litre Carrera and a 3.8-litre Carrera S coupes were offered, and customers wanting all-wheel drive had to wait until October 2005 when Carrera 4 Coupes and Cabriolet models arrived in dealerships. Porsche again underscored the role of four-wheel drive by making the pretty Targa version of the 997 available exclusively with this chassis. Arriving in September 2006 and again available in standard and S trims, the Targa defiantly shook off its tag as the ugly sister of the 911 range.

The 997 took its quality cue form the Cayenne 4x4 and features a three-spoke wheel and an in-dash LCD monitor. Some aspects are pure 993, however, such as the location of the air vents and the roll top along the upper dash. Porsche know their history and so do their customers and the design of the 997's cabin pays homage to Porsches of the past. The quality of materials, however, is like no 911 built to date. Expensively slush-moulded fascia materials make a welcome change to the hard plastics seen in the 996 and it's possible to specify leather trim. The front seats are bigger, the driver sits 20mm lower and there's a choice of four different seats depending on how racy you want to feel. Another neat option to be found on some cars is the dash-top mounted Porsche Sport Chrono, a stopwatch that can time laps. The 997-series take on the 911 Carrera 4 theme is fully 44mm wider at the rear than the Carrera 2 body, which means that the rear wheels are fitted with the 295/35 ZR18 tyres and the more powerful S model can wear huge 305/30 ZR19 rubberwear. It also gives the back of the car some attitude that some would say was missing from the pure and pretty rear wheel drive Carrera. By comparison, the Carrera 4 looks hunkered down and squat. 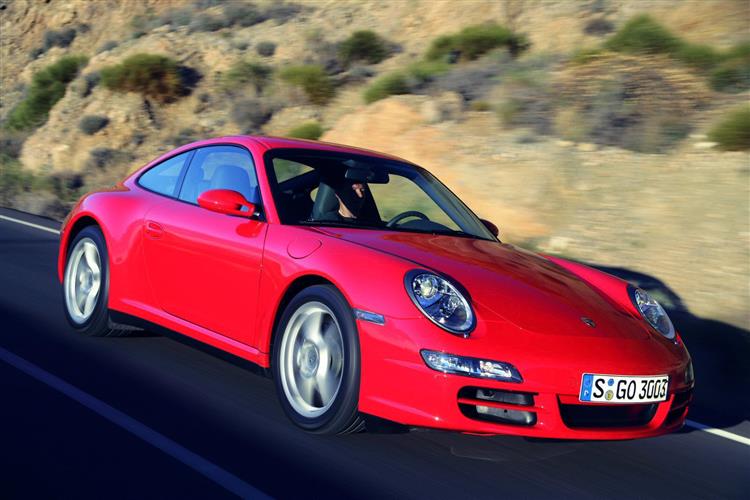