"We can modify the 911, hone and improve it, but we must never alter either its character or its unmistakable appearance." So opined Ferry Porsche in 1993 at the launch of the 993-series Porsche 911. Yet this iteration of the 911 came close to contradicting the old man and divides opinions between Porschephiles. Some see it as a stopgap model, produced for a mere five years before the introduction of the water-cooled 996-series 911 while others view it as the last of the 'real' 911 models. Both views have an element of truth, but what can't be argued is that the 993 - as we shall refer to this model - still represents one of the finest and most practical supercars around. As a used proposition it makes paying nearly £30,000 for a new Audi TT look a little predictable.

Porsche was not in good shape when the 993 was born. The boom years of the eighties were but a fading memory and Porsche had failed to invest the windfall income of the good times wisely. With the ageing 928 and the slow-selling 968 - effectively a rehashed 944 - on their books, this independent company was looking a ripe target for takeover by one of the big automotive carnivores eager to bask in the reflected glory that Porsche engineering would have on their other wares. With the Boxster model still some way off and the relatively unloved 964-series 911 looking a little old, the 993 had to carry the company through a difficult period. Fortunately it was good enough to do so, coming at a time when key rivals were also going through a tough patch. The Honda NSX only sold in trickles, TVR's Griffith couldn't shake its reputation for poor build quality and in the shape of the 348, Ferrari had their weakest offering in the junior supercar sector that most could remember. The 993 arrived in the UK in December 1993 in base rear-wheel drive Carrera form. With 272bhp on tap it wasn't a great deal quicker than the 964-series Carrera 2 but the lines were far smoother, the interior a little more modern and the running gear a good deal more sophisticated. The Cabriolet model was launched in April 1994, but it wasn't until October 1994 that fans of four-wheel drive were sated by the arrival of the Carrera 4, identifiable by indicators that were white at the front and red at the back rather than orange all round in the case of the standard Carrera. In April 1995 Porsche launched the iconic 911 Turbo in 993 guise, powered by a 408bhp version of the 3.6-litre lump, mated to the Carrera 4's all-wheel drive running gear. The 993 Turbo represented the first Porsche Turbo with a six-speed box, two turbochargers and four-wheel drive. It was truly an awesome beast. This was followed in October 1995 by the Carrera 4S, a model which aped the Turbo's looks but with the Carrera's normally aspirated engine. At the same time, Porsche also revived the Targa designation, this time around substituting the lift-off targa panel for an electrically operated sliding glass roof. The engines in the Carrera models was also uprated to 285bhp thanks to modifications to the valves and the addition of Varioram, a two stage induction system. A Carrera 2S was launched in August 1996. Although the 996-series of the Porsche 911 was launched in late 1997, production of the 993 Turbo continued right up until October 1998.

What You Getword count: 194

Always renowned as the supercar you could drive to work in, the Porsche 993 is a remarkably practical thing, especially when compared to the compromised mid-engined exotica it often found itself compared with. The 993 shape took a little getting used to, Porsche ditching the upright headlamps in favour of a more aerodynamic look pioneered by the 959 special although many of the styling changes were evolutionary, Porsche already working on the revolutionary water-cooled 996 series 911 throughout the life of the 993. Certain 911 trademarks remain. The floor mounted pedals and four dials across the rudimentary dashboard, the good all-round visibility and the untemperamental nature of that flat-six engine were all familiar touchstones that soothed those fretting over the smooth styling. With a pair of rear seats and a boot under the bonnet, the 911 gave a nod towards practicality. Twin airbags, leather trim, alloy wheels, electric windows, air conditioning and a sunroof were fitted as standard to even the base Carrera. By today's standards the interior looks a little dated, with some haphazardly scattered switches, but build quality is admirable, the 993 feeling very solid even with 100,000 miles on the clock. 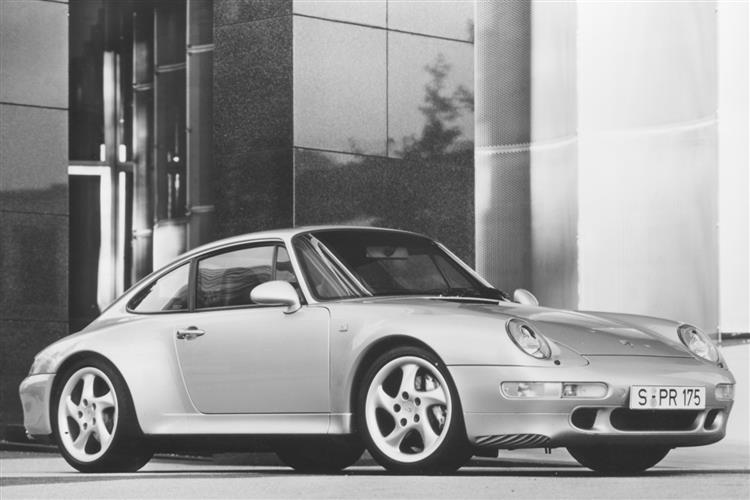