FLAIR OF THE FROG (some text hidden)

The famous British reserve has traditionally been something of a curse for boldly styled cars. The Ford Sierra took a long time to catch on, whilst the public never really took to the Ford Scorpio with its challengingly aquatic looks. It seems no matter how good a car is, if it looks a bit out of the ordinary, the car-buying populace break out the barge poles. And so it is with the Fiat Multipla. Showered with awards and praise by all who drive it, it has been outsold by more conservatively styled offerings such as the Vauxhall Zafira and Renault Scenic. Beauty may be in the eye of the beholder, but just because you've a family to haul about doesn't mean that you have to forgo any notion of style. Does it?

Fiat's engineers approached the design of the Multipla with a clean sheet of paper. Basing the car upon the shape of no other existing model in the range paid enormous dividends in terms of packaging. A low, wide floor and a high, domed roof were designed around the novel three-abreast front and rear seating arrangement. Whilst many rivals claim to be designed around the occupants first, with the Fiat the clever touches and well-considered dimensions lend this assertion added credence. Two engines were available at launch, a 103bhp 1.6 16v petrol and a 105bhp version of Fiat's popular JTD turbo diesel 1.9-litre unit. Both cars were available in SX or plusher ELX trim. In December 2000, the JTD engine was uprated slightly to 110bhp. Despite this sales of the Multipla in the UK have never been better than modest. Sales figures for 2000 showed the Renault Scenic selling 32,560, the Vauxhall Zafira 21,582 and the Multipla shifting a mere 3,145 units, despite walking away with Top Gear's prestigious Car Of The Year award. The blame for this disappointing sales performance was laid at the door of the unconventional styling and this issue was addressed by the thorough facelift of summer 2004. The resulting angular look made the car a more viable proposition to mainstream buyers. Beneath the skin little was changed but trim levels of Dynamic, Dynamic Plus and Eleganza were introduced. This model was replaced by a more conservatively styled version in 2004.

What You Getword count: 594

Whilst some rivals have opted for a seven-seater layout, Fiat reasoned that six usable seats were more practical than seven seats that you had to climb, wriggle and contort yourself into. Take the Vauxhall Zafira. Two doors on each side and three rows of seats. Is Granny really going to be able to get in the back row? No. Since six people can therefore be accommodated in only two rows of seats, the overall length of the car can be kept short - four metres to be exact, half a foot less than a VW Golf. Yet try to picture three full-sized adults sitting alongside each other and you'll find yourself picturing a very wide car indeed. Sure enough the only car you can buy that's wider than this little Fiat is a Rolls Royce Silver Seraph. That three-abreast design approach meant that whichever way the designers cut it, they were going to have to produce a very unusual-looking car indeed. In which case, someone in Turin must have decided, we might as well go all the way - and sure enough they have. The Multipla could well be the most unusual car you will ever have seen. It's as if someone has driven a family hatchback under a low bridge, stripped the top half of the body away, then added a square glassy box on top of what remains. Unusually for an MPV, that means a conventional flat bonnet on top of which sits what can only be described as the cabin podule. This overwhelms the lower part of the body, spilling over the edges of the waistband below the front screen. It also features an unusually low waistline, with glasswork so deep that onlookers can admire the elbows and knees of occupants as they pass by. It all sounds very strange - and it is, at least until you've lived with the shape for a few weeks. By then, you will have learned to ignore all the stares and probably begun to rather enjoy those futuristic looks. And with that out of the way, there really aren't too many other reasons to dislike this little Fiat. Anyways, Fiat removed the styling issue altogether with the facelifted Multipla - a far more run-of-the-mill visual proposition. Whichever Multipla you choose, getting in and out is easy, courtesy of high, wide doors and seats that are comfortably but not excessively high. All six seats are identical and equally comfortable, all have three-point seatbelts and all are light (16kg) and easily removable. The middle seat up front can be folded flat (to give three extra cupholders) or replaced completely by a console including an 18-litre cooled or heated box. It's the same in the rear, where the middle seat can be either folded or removed to accommodate a small fridge. Rear seat leg and headroom is outstanding for such a small car - almost limousine-like in the rearmost of the two mounting positions on offer. Even with the seats set this far back, there's still as much luggage space (430 litres) behind them as you'd find in a Mercedes C-class, or 540 litres if you click them forward a notch (sacrificing little in terms of ride comfort). The only drawback of the Multipla's loading bay is that it is wide and tall, but lacking in depth. It's fine if you're transporting suitcases as the Fiat promotional literature shows, but if you're trying to load shopping bags or other items which don't sit so happily on top of one another, it's not quite such a great concept. 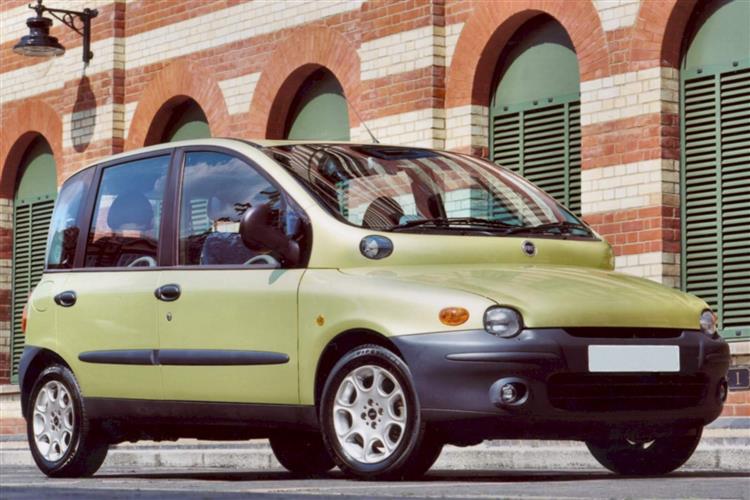