If you're looking for a large secondhand MPV with a modern feel, it's easy to overlook Fiat Ulysse. Many new buyers did. Most bought Ford Galaxys or that car's VW or SEAT clones instead; fine for the driving enthusiasts but in many ways, not as practical as the Fiat, with its sliding side doors. The Ulysse too was cloned (Citroen's Synergie and Peugeot's 806 are essentially the same car). It is however, usually the cheapest of the three to buy - and that's also the case on the used market.

The car was launched in October 1995 at around the same time as its stablemates from Peugeot and Citroen. Like them, it could seat between five and eight people in comfort, depending on the model you selected. There were four to choose from, with under the bonnet, a selection of 2.0-litre petrol power or a 1.9-litre turbo diesel unit. Minor styling revisions were introduced in 1998 when air conditioning became standard.

Despite affordable prices, the specification is quite good though there has never been an automatic transmission option, which may put some buyers off. There's an airbag in the adjustable driver's steering wheel as well as controls for the four-speaker stereo. In addition, all models got power steering, central locking, an engine immobiliser, front electric windows, adjustable headlamps, tinted glass and front fog lights. From March 1998 the cheaper models received air conditioning as standard and more upmarket versions had automatic climate control. Entry-level `S` versions came complete with five seats, but separate option packs gave you either seven or eight, depending on your need. If you're after an eight-seater, it would be as well to consider the optional roofbars and roofbox available from dealers, since luggage space will necessarily be restricted. The plusher `EL` variants came only in seven-seater format. Either way, the sliding doors glide back to reveal a wider range of interior permutations than you could shake a stick at. The front seats swivel through 180 degrees to face backwards, the reason being that you can do just about anything you want with the others. They can be relocated on alternative mountings to maximise legroom, reclined, swivelled, folded, converted into picnic tables or removed altogether. In a few minutes, your Ulysse can change from family taxi to removal van, executive mile-cruncher to impromptu conference room. All this from a vehicle that takes up no more space on the road than the average medium range estate car. It sits a fair bit higher of course - and so will you, which takes a little getting used to. After a few miles however, the superb visibility offered by that vast expanse of glass begins to become a boon though the heat that glass allows in is not. Given a few more miles, you might even get used to the dashboard-mounted gearstick and locate the handbrake (it's on your right). In day-to-day use, you and the family will notice a careful selection of thoughtful touches. There's even a sprung holder for the driver's spectacles or sunglasses in the driver's door. Whether you're using your Ulysse for a small children's party or simply somewhere to sleep, you'll find Fiat have thought ahead. 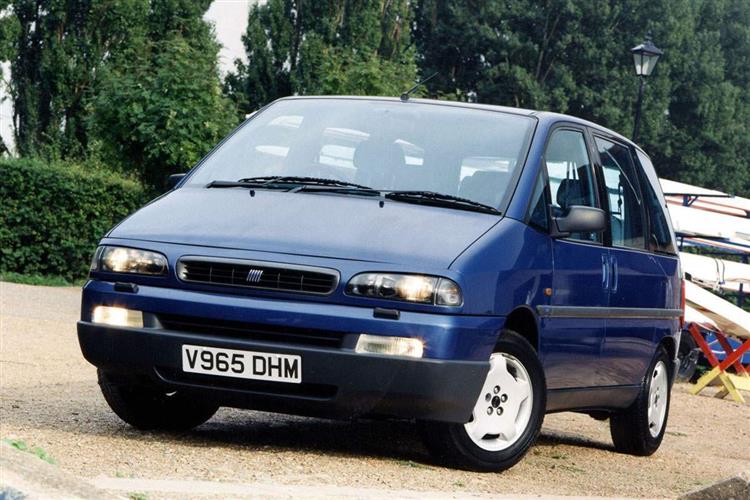