Deep down we always knew that Land Rover were underachieving with the Discovery. If given a clean sheet of paper and a generous development budget, most 4x4 enthusiasts knew that the famous British marque could produce a genuinely world-beating family 4x4 and so it proved. When it was unveiled in late 2004, the Discovery 3 offered a bold new take on a classic theme with radical styling and high tech features packed into a model which spanned a wide range of pricing. As a used buy, Disco 3s are still in very high demand so don't expect any screaming bargains.

Say what you will about the old Discovery, but there was always something endearing about it. On virtually any objective calculation, it was way off the pace but the way it had triumphed over considerable adversity was almost Shackletonesque. The Discovery 3 doesn't need to rely on the British admiration for stiff upper lips to do well. It was new from the ground up when launched in 2004 and boasts enough technology and design savvy to punt all of its rivals clean off the map. The old Discovery had so many facelifts that there was a running industry joke that there were more Discovery variants around than Discoverys themselves. Although this may have engendered a certain exclusivity amongst buyers, it never did much for the Discovery's resale value, which was mediocre at best. Factor in the car's consistently poor showing in customer satisfaction surveys and it was apparent that a radical overhaul was required. With Ford money bankrolling the design process, this was a true 'no expense spared' bid to build the best possible family 4x4. With the Range Rover commanding serious money, there was a huge swath of market for the Discovery to stretch into, charging premium prices for a premium quality product. From the 2007 model year all Disco models were fitted with the Land Rover Watch stolen vehicle tracking system.

Unambiguously a Land Rover product, the Discovery looks like a Range Rover from the front and a Freelander on growth hormone from the side - no bad combination. Design director Geoff Upex is proud of his team's work. "Everything you see has been done for a reason. The priority was to give the passengers and driver a superb cabin environment with more headroom and greater comfort. It has big, deep glazing because that provides greater airiness and a better view." Most importantly, it does a good job of refreshing the brand's styling without diluting the look and feel. " An absolute priority was that nobody could mistake this vehicle for anything else." said Upex. "It had to look modern, bold and distinctive." The Discovery 3 certainly ticks those boxes. Asymmetric styling is a key theme. The rear tailgate is designed in this way and there's an air intake on one side of the car but not on the other. With typical economy, Land Rover claim that's all that was needed. An optional third row of seats was available with fold flat functionality in both the second and third rows giving the Discovery some serious load-lugging abilities. The designers of the previous generation Discovery managed to perform the neat trick of endowing a vehicle with a huge mass and a substantial footprint with a strangely pokey interior. It was a little like the Tardis in reverse. Fortunately, the current model is far better on this score. It's bigger than the car it replaces with 345mm extra wheelbase to play with and this is reflected inside where occupant accommodation is far more generous. However, some users complain of restricted luggage space when all seven seats are in use. 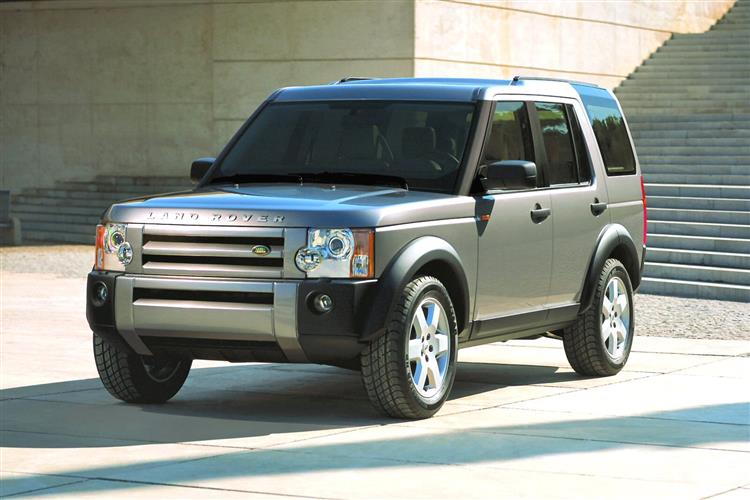