Although much of its thunder has been stolen by newer arrivals, the Audi TT roadster remains a very aspirational piece of automotive sculpture. What's more, a quick drive to reacquaint yourself with its talents reminds you in no uncertain terms that the years have been good to this car. It still feels funky, fresh and fun. With used examples now available in meaningful numbers, a TT Roadster makes an intriguing alternative to something like a new Mazda MX-5 or MG TF.

The Audi TT Roadster had a rather unfortunate start to life, the much anticipated August '99 press launch being overshadowed by a growing number of reports calling into question the high-speed stability of the TT following a rash of accidents. Audi responded swiftly, recalling all cars and fitting them with modified shock absorbers, anti-roll bars, a rear spoiler and, latterly, the ESP stability control program. Many industry observers quietly doubted whether any of these changes were in fact necessary. The common belief was that due to its looks, many buyers who wouldn't normally be attracted to an admittedly animated high-performance car were purchasing the TT and driving the car well beyond the margins of their skills. Two versions were available from launch, both powered by a 1.8-litre turbocharged engine of either 180 or 225bhp power outputs, the latter being distinguishable by its twin exhaust pipes. In autumn 2000, the TT 180 received the six-speed gearbox that was previously only available in the TT 225, enabling more relaxed and economical high-speed cruising. A more extrovert range of colours was also unveiled, finally putting an end to the complaint that the TT was sold short by the range of dowdy tones available. Spring 2003 saw a budget 150bhp front-wheel drive version of the roadster introduced but roadster buyers had to hold fire until early 2004 to get their hands on the 3.2-litre V6 model. With 247bhp on tap, this version featured an innovative twin clutch system to ensure seamless gearchanges. Those who sampled it were astonished at quite how far ahead of the rest this system was. In August 2005, the 150bhp entry-level car was upgraded to 163PS and the 225bhp car was discontinued.

The TT is one of the most conspicuously styled cars of recent years. Everything about the design of the interior and exterior has been created with function first, but visual impact a very close second. Slide into the drivers seat and other cars instantly seem very bland. Inside, as would be expected of Audi, everything is soft touch, beautifully damped in a motif of retro-cool aluminium, industry-functional rubber and taut, shiny leather. Every switch has a well-oiled motion, a solid detent and hidden 'surprise and delight' features that betray a worrying attention to detail amongst Audi engineers. Depress the aluminium throttle pedal to the floor in one fluid movement and - click - metal on metal; an exemplar of the surgical excision of mush or flab that marks the TT. At a standstill, there's no debate; the TT leaves its rivals floundering. The roadster model is very impressive indeed, although the decapitation process has radically altered the essential character of the car. The sleek swoop of the roofline has gone, replaced by a well sculpted but chunky hood that gives the car a profile that best resembles a Tonka rendering of a Porsche Boxster. Hood down, the car maintains it's aggressive, almost caricature, buggy look. The wheels appear larger, the frontal aspect more bullish and the unfashionable lack of tension in the flanks suddenly becomes a laudable design aspect. The options list is long and includes a curious baseball glove interior styling package that sees the upholstery trimmed in butterscotch leather with bright yellow stitching and threaded together with yellow leather tape. Whilst more reminiscent of something rejected on the grounds of bad taste by Gene Autry and almost totally lacking in lateral support, it's proved popular. The hood itself is not as slick as rival offerings from Mercedes or Porsche and although single skinned, is built to an impeccable standard, resisting wind noise admirably. A thoughtful touch is the electrically operated glass wind deflector that slides up between the seats, protecting the occupants from buffeting. Look at how slick this is, and then compare it to the system on the Volvo C70 convertible. Then you'll realise why people want TTs so badly. 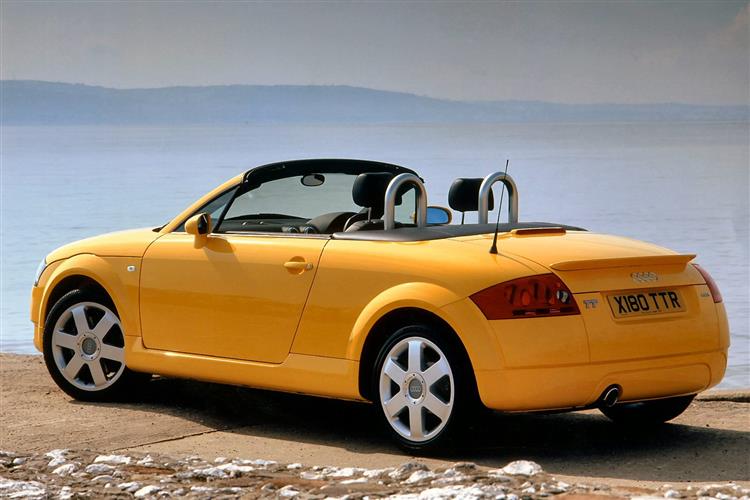