The concept of a monstrously powerful executive express isn't exactly new, but Audi brought a level of technical sophistication and understated elegance to the genre with the launch of the S8 in 1997. For some time, this was the coolest car you could put in the boardroom car park, only being overtaken in the power stakes when German rivals started shoehorning ridiculously powerful engines into their big limousines. The S8 may no longer be the most modern car you can buy, but it still feels quick, extremely well built and hasn't lost too much of its lustre. What's more, they're available for a good deal less than you might think.

It's hard to believe that the A8 range was sold for three years in this country between July 1994 and July 1997 without an S8 flagship. During this period, Audi offered an A8 4.2 quattro Sport model but this didn't offer quite the focus of the S8. An immediate hit when it arrived, the S8's 340bhp might seem small beer when today the cream of the supersaloon set have upward of 600bhp under their bonnets, but it's enough to power the aluminium bodied Audi along at an indecent lick. The first real range revamp came in May 1999 when power output rose to 360bhp and a number of styling tweaks were introduced. New headlight units, restyled grille and bumpers, SIDEGUARD airbag system and a leather trimmed Tiptronic steering wheel were all introduced and a satellite navigation system with a five-inch monitor was also available. The S8 campaigned in this form through to February 2002 when the Special Edition model was introduced. For 2002, Audi updated the car's appeal slightly, the most obvious change being the 20-inch 9-spoke alloy wheels. Hugely powerful Xenon Plus headlamps also feature as does a boot-mounted six-CD system, freeing up space in the dashboard for the standard satellite navigation monitor with TV and teletext. A BOSE sound system, side sunblinds and dark myrtle fascia were also ushered in. The S8 was deleted when the all-new A8 was introduced in 2003.

The trouble with most of the great driving movies is that they're all so quaint. Bullitt, The Italian Job, Cannonball Run, and Vanishing Point all feature tackle that unless stored in a dehumidified garage, would be pretty dog-eared by today's standards. The exception is 1998's 'Ronin'. Starring Robert DeNiro, Ronin is a thriller that features some of the best car chases ever filmed. At the beginning of the movie, wheelman for hire Larry is asked what kind of car he needs for a risky job and he replies, "Something very fast. Audi S8, something that can shove a bit." Thing is, the promise of a sprint to 60mph in 6.6 seconds and a 155mph doesn't satisfy our Larry. He wants more. Opting for a dual-tank nitrous-oxide boosting system, this black S8 is then used to run down baddies, powerslide about the streets of Paris, and monster around at ridiculous velocities among the back alleys of Nice. Unfortunately finishing up shot through with more holes than a Jeffery Archer alibi, the S8 nevertheless fulfils a role director John Frankenheim wryly terms 'hero car'. How it missed out on a Best Supporting Actor statuette is beyond me. Specify one in a sober colour and only movie anoraks and car buffs would spot the discreet badging, the aluminium door mirrors and the twin exhausts. If you're buying a car to make a statement, the S8 may disappoint. If you value anonymity in the face of vandals, boy racers and the local constabulary, the S8 could just be your thing. The interior is, strangely, perhaps the least impressive aspect. Rear seat accommodation is optimised for two outboard passengers and legroom isn't the best in class. There's not too much wrong with the cabin up front but one can't help but feel that too many of the fixtures and fittings are Audi-generic, not being that much different from a cooking A3. Perhaps this is nitpicking, but the S8 lacks a certain sense of occasion, a specialness that comes as standard with an Jaguar XJR or a Mercedes S55 AMG or the feeling that you're within touching distance of the cutting edge. Having said that, it is beautifully appointed in terms of standard equipment with a vast welter of cowhide, airbags and electronic acronyms designed to keep you on the straight and narrow. 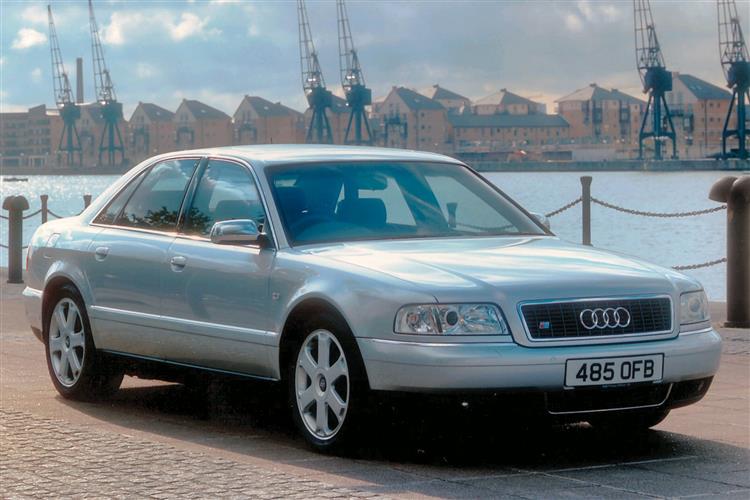