DIAL 9-1-1 IN CASE OF EMERGENCY (some text hidden)

If ever a sports car could be described as a legend, the Porsche 911 is it. Around in one form or another for over a quarter of a century, the 911 had carved a reputation as a slightly malevolent, air-cooled rear-engined beast. In 1997, with the launch of the '996' series, the 911 had 'malevolent' and 'air-cooled' struck from its vocabulary. These water-cooled Porsches were a huge step forward, their dynamic excellence silencing most of the critics who felt it heretic to liquid cool a 911. The handling was transformed as well, giving the 911 a more mature, benign personality. Tracking down a good used 996 series Porsche 911 is a quick way of jumping the waiting list without taking a wrong turn down the road to financial ruin. Here we take a look at the seminal 911, the rear wheel drive Carrera 2.

To understand the direction Porsche's thinking was taking in the development of the 996 series 911, one must track right back to 1978, to the development of the 928 model. Designed as a replacement for the 911 model, the 928 never caught the public imagination, even in its final GT versions. The 911 meanwhile, underwent significant development, Porsche finally realising that killing it off would mean slaughtering the goose that laid the golden egg. Sacrificed on the altar of brand equity, the Porsche 928 nonetheless showed the future direction for 911 models. Porsche's R&D Chief, Horst Marchart, realised that the next generation of 911 had to attract customers who used to be attracted to the Porsche 928 and Mercedes SL, whilst at the same time being able to see off the sort of sports cars 911s traditionally ate for breakfast - cars such as the Honda NSX and Lotus Esprit V8. If 'Type 996' was anything less than a pure 911, the purists would be up in arms. But if it remained an expensive weekend toy, the company's future could hardly be assured. Given these constraints, what Marchart and his team achieved is quite remarkable. The 996 series was launched in the UK in October 1997, with two variants being available, the 3.4-litre Carrera 2 (for two wheel drive) coupe manual and a Tiptronic S semi-automatic version with steering wheel gear shifting buttons. 2001 saw a revision of the 911 Carrera 2, with turbo-look headlamps, revised steering and suspension, some interior upgrades, but most importantly of all, a 3.6-litre engine which developed 320bhp. The cabrio version's hood was amended and it also gained a glass rear window.

What You Getword count: 231

Whichever model you choose, you'll find yourself with a car that ironically, is actually more closely related to the smaller Boxster than the previous shape 911: over 40% of the componentry is shared. You notice this most of all inside, where the previous haphazard array of knobs and switches has been replaced with the Boxster's far more cohesive layout. There's more cabin space too - but don't let this lull you into thinking of the new 911 as a realistic four-seater. It isn't. The front boot's bigger too, but you still can't fit more than two bags in it. Antilock brakes and twin front airbags are included, although side bags and the excellent Porsche Stability Management electronics are extra. The Convertible features automatic roll-over protection, but you don't tend to see too many of the soft top cars around, possibly due to the unintended cosmetic similarity between it and the much cheaper Porsche Boxster. All the 996 series 911s feel incredibly well built. The cabin, which even in the previous generation 993 series had far too much VW Beetle DNA evident, is now befitting of a serious sports car. Certain design cues remain; the slab sided dashboard and simple switchgear, and that Weissach crest staring at you from the steering wheel let you know that you're about to get a return on the millions Porsche have invested in research and development. 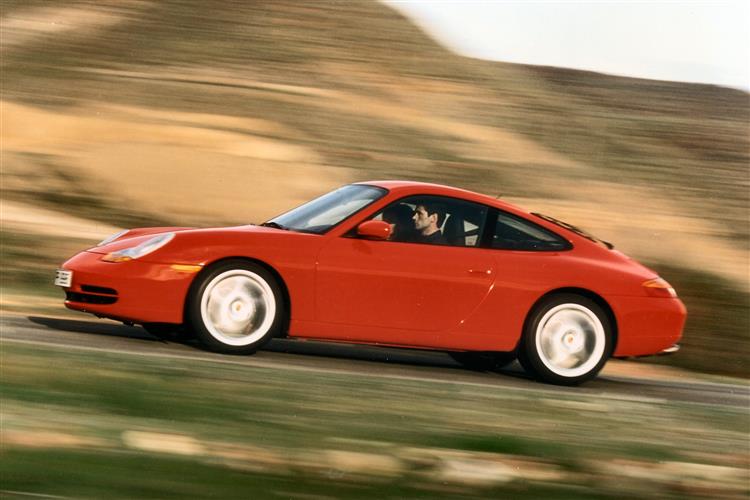