Audi's 'S' series of cars occupy a narrow but well-defined niche. Not quite as focused as BMW M cars nor as powerful as the heaviest hitting AMG Mercedes models, they nevertheless offer serious performance with impeccable build quality. If you feel the need to ramp the intensity levels up a notch or two higher, Audi also offer the premium sports RS models but for most A6 executive saloon and estate buyers, the 'S' treatment was quite sufficient. The 340bhp S6 we look at here was created in late 1999 and was justly popular. As a result, there's no shortage of choice for used buyers.

The inkling that a sporty Audi A6 may be on the way was betrayed by the introduction of the 295bhp A6 4.2-litre quattro models in February 1999. With a longer bonnet than the rest of the A6 range to house a monster V8 engine, the A6 4.2 was quick but designed to cater to an executive audience with a whole host of luxury fitments and comparatively soft suspension. Some wondered what the car's raison d'etre was given that it wasn't significantly quicker but markedly thirstier than the 2.7T model that Audi already offered. The S6 answered many of these questions but wasn't unveiled until late 1999, the first cars starting to appear in UK dealers at the turn of the year. With 340bhp on tap, it wasn't the BMW M5 basher that many had hoped for, Audi instead concentrating on a firmer ride, a more aggressive look and feel and a few tenths knocked off the benchmark sprints. Available in saloon and Avant estate, it was nevertheless very popular.

What You Getword count: 158

Visual clues to the S6's identity are few. There are tiny boot badges, an S6-badged Audi Sport front radiator grille, brushed aluminium door mirror casings, 17-inch Avus six-spoke alloy wheels and twin stainless steel exhaust pipes. In other words, the neighbours need never know. The interior looks and feels the part. The Recaro sports seats are trimmed in a combination of Alcantara (a kind of suede) and soft leather, while the dash and doors get carbon fibre inserts (or traditional wood if you prefer). As you'd expect for the money, equipment is pretty comprehensive (climate control, six airbags, cruise control, electric everything etc, etc), though for those with more to spend, there were still plenty of options, including a colour TV built into the dashboard. Specification improvements introduced towards the end of the car's life included the addition of Xenon Plus headlamps, an air quality sensor and a 'Symphony II' radio with front dash-mounted CD autochanger and cassette. 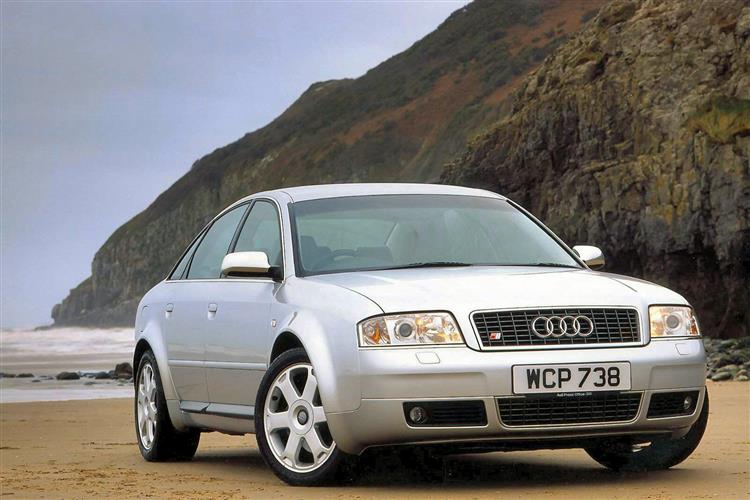