There aren't too many modern cars which have achieved quite the level of success enjoyed by Mazda's MX-5. Launched in the UK in 1990, it quickly established itself as the benchmark affordable roadster and went on to be listed in the Guinness Book of Records as the world's best selling sports car. In 1998 an extensive revision was visited upon the MX-5 and with tougher rivals entering the fray, the Mazda no longer had it all its own way. A well looked after late shape MX-5 does make a very safe used purchase, however, being both reliable and easy to sell on.

In April 1998, the range was replaced by an all-new second-generation version. The pop-up headlamps were ditched in favour of fixed lights, the engines were made more powerful and the vinyl zip out rear window was upgraded to a proper glass item. Twin airbags were fitted and the S model received a Torsen limited slip differential. A 10th Anniversary six-speed limited edition model was imported in limited numbers in the summer of 1999 and subsequent special editions included the California and Icon. A revised MX-5 was announced in June 2001 with a slightly cleaner look and a classier interior. Only the most ardent spotters noticed that the front air intake had become a more V-shaped affair, whilst a pair of recessed front fog lamps also helped to lend the frontal aspect a little more venom. The tail lights looked subtly different, and you also got a six speed gearbox on the 1.8i Sport. The 1.8-litre engine gained an SV-T variable valve timing system that gave it extra smoothness and shove at the top end plus an extra 8bhp - though at the expense of 12% higher fuel consumption. Plus there was, for the first time, an automatic version of the 1.6i. So as to keep the momentum going, the importers announced a package of specification changes in late 2002. All MX-5s now included a fuel empty light to warn of impending fuel starvation: ludicrously, it wasn't fitted before. There was also now ISOFIX front passenger child seat anchoring. Electric heated mirrors and a power aerial were also now standard, plus there was now the option of a more visually attractive cloth soft top combined with 15" alloy wheels in lieu of a vinyl roof. Go for the top 1.8i Sport variant and you also got a chrome fuel filler cap, that cloth soft top and Bilstein dampers as standard. Oh and the option of satellite navigation. The new MX-5 arrived in 2005 to replace this model.

What You Getword count: 131

Whether you opt for the 1.6i, the 1.8i, the 1.8i S, its successor the 1.8i Sport or any of the multitude of special edition models that Mazda launched in order to keep the MX-5 in column inches, you'll find much the same formula. Despite the ever increasing equipment list, the MX-5 is, at heart, a very simple car offering traditional roadster motoring without the sacrifices. Two six-footers will easily fit inside and the shallow boot will just about cope with the luggage for a long weekend. The MX-5 is also a very easy car to live with, offering untemperamental reliability and acceptable practicality. The only flaw in Mazda's plan has been an ever increasing retail price, but used buyers can offset much of this with a bit of canny shopping around. 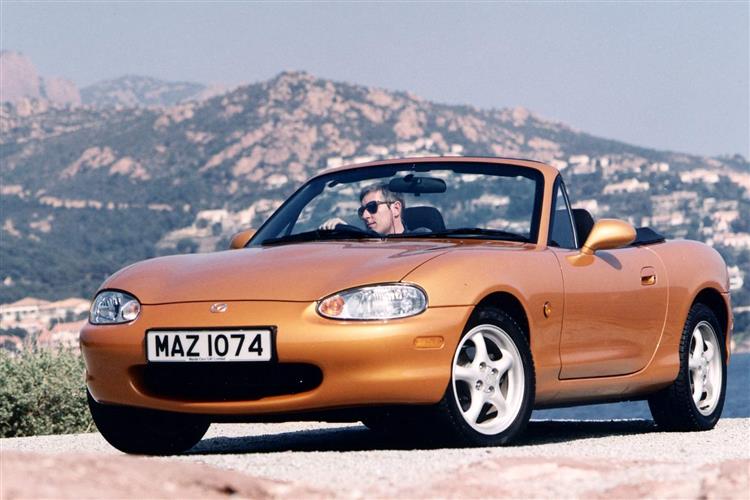