YOUR PARTNER IN SLIME (some text hidden)

Land Rover were late in recognising the potential of the mid-sized sector of the four-wheel drive market. For years, the Solihull company's Range Rover and Land Rover products catered only for luxury sector and utilitarian buyers; if you simply wanted a spacious 4x4 for the family, you were out of luck. When it was launched in 1989, the Discovery changed all that. Since then, the car has consistently been one of the off-road market's strongest sellers - which means that there are plenty to choose from for the used buyer. Few will have seen any serious off road use and all are built stoutly. It has to be a recipe for a sensible buy - doesn't it?

The Discovery was launched in November 1989 to universal press acclaim. The early choice was limited to the three-door bodyshell with either a 2.5-litre turbo diesel engine or a 3.5-litre V8. Over 90% of buyers then (and now) opted for diesel power - the petrol unit was prohibitively thirsty. The market had to wait until the autumn of 1990 before the five-door bodyshell was also made available; this came to account for the vast majority of Discovery sales. A 2.0-litre 16v petrol MPi version was announced in June 1993 (it was not to prove a great success) and, in September of that year, the old 3.5-litre V8 was replaced by the 3.9-litre V8 from the old-shape Range Rover. The major event in the Discovery's history occurred in March 1994. Keen to sell the car in the United States, Rover took the opportunity to develop twin airbags. At the same time, the Sir Terence Conran designed interior was changed and modernised and the front grille given a facelift to include larger, flush-fitting headlamps. The diesel engine too, was made more refined. At the same time, a flagship 'ES' model with leather and air conditioning was added to the top of the range. In 1995, a new mid-range XS trim level was announced, while a run of 700 Argyll special edition versions appeared in summer 1997. At the same time, new GS trim level versions joined the range. The Series II Discovery range was launched in autumn 1998. There was an all-new Td5 in-line, five-cylinder 2.5-litre turbodiesel engine and a 4.0-litre V8 in place of the 3.9 - the slow-selling two-litre Mpi petrol model was dropped. Trim levels were S, GS, XS and ES. Much more impressive road manners came courtesy of Self-Levelling Suspension (SLS) and Active Cornering Enhancement (ACE) but these were standard only on plusher variants. Other driving aids included Four Wheel Electronic Traction Control (ETC), Electronic Brake Distribution (EBD) and, most notably, the Hill Descent Control (HDC) first introduced on the Freelander. You wouldn't think so to look at it but not a single body panel was carried over from the previous version. There was also a new dashboard layout and much more supportive seats with the third row now forward, rather than side-facing, together with improved security, safety and nice touches like a 'curry hook' on which to hang your takeaways.

Undisputedly the best four-wheel drive tool for heavy going. The Discovery has coil springs where many competitors have less advanced suspension set-ups. This means that it negotiates steep gullies and deep potholes with ease. Bear in mind too that the Discovery has permanent four-wheel drive, not the selectable systems used by most of its Japanese alternatives (who spend most of their lives in 2WD). Though this leads to extra tyre wear, it does mean that you're always prepared for the worst. There's seating for seven inside, thanks to a fold-out pair of occasional side seats in the estate compartment but note that they were not fitted to every car as standard. 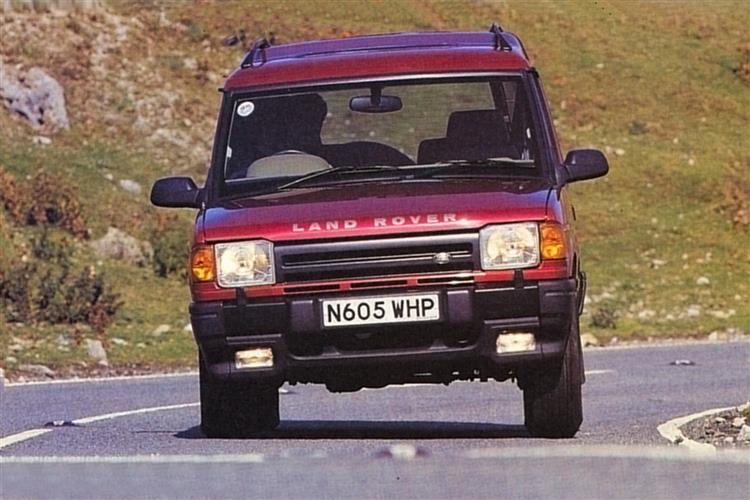