It would not lapse into hyperbole to describe the 2005 RS4 as a car that revitalised Audi. Prior to the RS4, the Ingolstadt company had never really managed to shrug off the ghost of the old ur-Quattro, a car that debuted in 1980. Every sporting car it developed was compared to that legend and deemed not as good. The RS4 changed all that. Here was a proper 21st Century sporting car with gobs of power and, for the first time in a powerful Audi, beautiful controls, a more playful chassis and an engine that delighted even the most demanding driver. Here's how to track down a used example of one of the most accomplished sporting cars of recent times.

I clearly remember driving the Audi RS4 for the very first time, so indelible was the impression it left. I was fully expecting it to be another fast but anaesthetised Audi but it proved something very different. Credit for this goes to Quattro GmBH in Neckarsulm, where the RS4 is lovingly built at a factory quite separate from the common-or-garden Ingolstadt Audis. Of course, this car had an element of form, its predecessor, the 380bhp twin-turbocharged 2.7-litre V6 RS4 having been on general release from 2000 to 2002. Despite being a bit of a hot rod, that car gained a cult following. The 2005 vintage RS4 was very different. Eschewing forced induction in favour of a high-revving naturally aspirated 4.2-litre V8, it was clear that Quattro GmBH had been listening to feedback from old RS4 owners. This car was instantly more tactile, more responsive and felt more special. At first only saloon models were offered but by April 2006 the very cool Avant estate and the not nearly so stylish Cabriolet had both appeared. With production capacity very limited and the RS6 moving onto the lines, Audi stopped building the RS4 in late 2007 with the final cars disappearing off dealer floors in the first quarter of 2008.

What You Getword count: 255

Although rear leg room isn't the most generous in the RS4 if taller occupants sit up front. Equipment levels are as you'd expect from a car of this price bracket. Riding on unique alloy wheels framing huge disc brakes, and fronted by the latest Audi single frame grille, the RS4 gets black metallic Valcona leather-upholstered RS bucket seats, cruise control, front seat heating, a BOSE sound system, front and rear acoustic parking sensors and electronic tyre pressure monitoring. Anti-lock brakes with electronic brake force distribution, Bosch's latest ESP v0.8 stability control system and no fewer than eight airbags also feature as standard. The Avant's load bay is stuffed with smart ideas, Audi's designers having a field day with ways to boost the diminutive Avant's practicality. There's a split/fold rear seat that accesses 1,184 litres of capacity. The floor of the loading bay is split laterally, with a 65-litre cubby providing additional storage space. Chrome lashing eyes, stowage nets and a heavy-duty reversible mat also feature. The RS4 Cabriolet features an electro-hydraulic soft top rather than a heavy and complex folding hard top arrangement. It lowers at the press of a button in 21 seconds and can be operated at speeds of up to 30km/h, ideal for when you're nosing through traffic and the heavens open or when you've just spotted a parking space and need to make a rapid exit. The hood features an acoustic liner to keep the interior quiet when it is in position and a glass rear window ensures decent rear visibility. 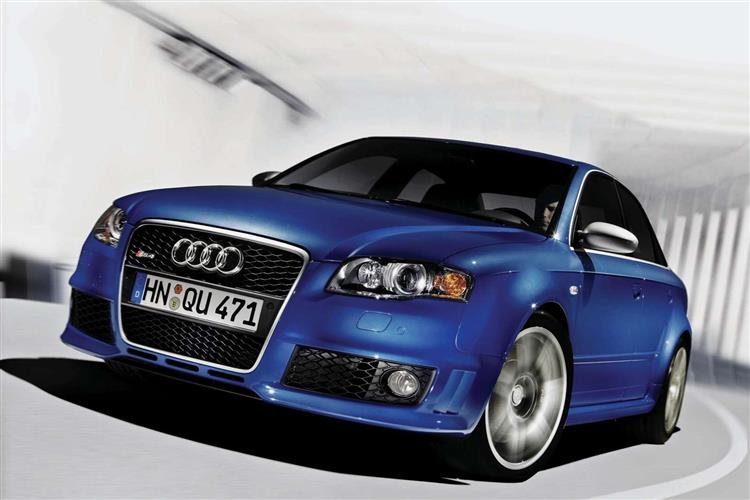