The carve up of the executive class has always been something of an elegantly frenzied affair. The Audi A4 did a better than most of eating into the sales figures of the BMW 3 Series and the 2000 relaunch of Ingolstadt's big money maker caused a fair deal of head scratching at BMW and Mercedes. It's unlikely you'll turn up a bargain as the A4 hangs onto its value like little else. Nevertheless, the truism that you get what you pay for certainly stands up in this instance. In either saloon, Avant estate or Cabriolet form, the Audi A4 is still a class act.

Few thought the previous A4 incarnation was looking long in the tooth, but mindful of the extreme pace at the forefront of the junior executive class, Audi launched an all-new A4 in March 2001.Recognisably an A4 but with a sharper suit, cribbing some design cues from the TT coupe, the car was an instant success. Upon launch, the range consisted of saloon and Avant versions fitted with a 130bhp 2.0-litre engine, a 1.8-litre turbocharged 150bhp or a range-topping 220bhp 3.0-litre V6. Diesel fans were catered for with a 130bhp 1.9-litre TDi powerplant. It wasn't until May 2001 that the second wave of new models arrived. 100bhp versions of the 1.9-litre turbodiesel lowered the bar slightly for those looking for a more affordable A4. Wave three arrived the next month - 101bhp 1.6-litre entry-level models, again making A4 ownership that little bit more accessible. Another month, another set of new models, July 2001 ushering in the 170bhp 2.4-litre V6 versions and the stonking 155bhp 2.5TDi V6 turbodiesel. Summer 2002 saw the unveiling of the 2.0-litre FSI engine, a 150bhp high-tech petrol engine that offered an appealing combination of performance, cleanliness and fuel economy. This positioned it nicely between the entry-level 130bhp 2.0-litre and the 1.8T engine which, along with the 2.5TDI, had its power boosted to 163bhp via some judicious tweaking of the engine management software. Early 2003 saw the introduction of the powerhouse S4 quattro with no less than 344bhp emanating from its 4.2-litre V8 engine. Then, in early 2004, the S line derivatives emerged to bridge the gap between the S4 and the rest of the range. Power came from a 187bhp version of the 1.8-litre Turbo engine. Just after this the entry-level TDI 100 engine was upgraded to 115bhp. The replacement for the A4 was unveiled towards the end of 2004.

In producing second generation A4 saloons and 'Avant' estates, Audi were under immense pressure to get things right. The shape was the thing that many customers loved about the original version, but the car had undergone a number of extensive revisions which had left that refined look largely unchanged. Not wishing to either kill the goose that was laying the golden eggs nor lay themselves open to the perception that they were selling an outdated car, the 2001 A4 preserved the character of the old model whilst freshening the style of Audi's strongest seller. It's a philosophy that carries on throughout the car - keep what was good with the old one and update and improve everything else. Criticisms of the outgoing model were largely aimed at the slightly less than top-drawer chassis and the relatively meagre rear seat packaging. The replacement model rectified these complaints pretty thoroughly and offered a selection of impressive powerplants as well. The Avant estate bodystyle yields 442 litres of space with the seats up or 1,288 litres with them folded. Audi makes great play of its quattro four-wheel drive transmissions, claiming that 30 per cent of new A4 buyers opt for it. Indeed, the whole range uses rear suspension based on the previous generation quattro models as well as a stiffer chassis and sharper steering. The car has grew in size to help passenger space. The length was up by 2.5 inches, and although wheelbase improved by only half this amount, some clever repackaging of the bodyshell liberated extra rear legroom, and additional head, shoulder and elbow room front and rear. In the quattro versions, the transmission tunnel running to the back of the car meant that there's effectively only space for four passengers. Boot space in the saloon was improved over the old car, while those looking for a stylish load lugger can choose the Avant estate version. The interiors correspond to what we've come to expect of Audi - beautifully damped fitments, impeccable materials quality and an almost frightening logic to all of the major controls. As with many modern cars, the fitment of windscreen-pillar airbags makes all-round visibility less than optimal, the chunky pillars restricting views around sweeping bends. Should you fail to spot an oncoming tree however, the electronic sensors fitted to the A4 can detect how hard your impact is and 'tailor' the deployment of the airbags accordingly. In some areas, however, the A4 was not the advance some may have expected. With many manufacturers incorporating many of the storage tricks they've learned from their MPV ranges into more mainstream cars, the Audi seemed to have missed a trick with its meagre array of oddment spaces. Nevertheless, for most the sheer depth of engineering evident in the cabin will be ample recompense. 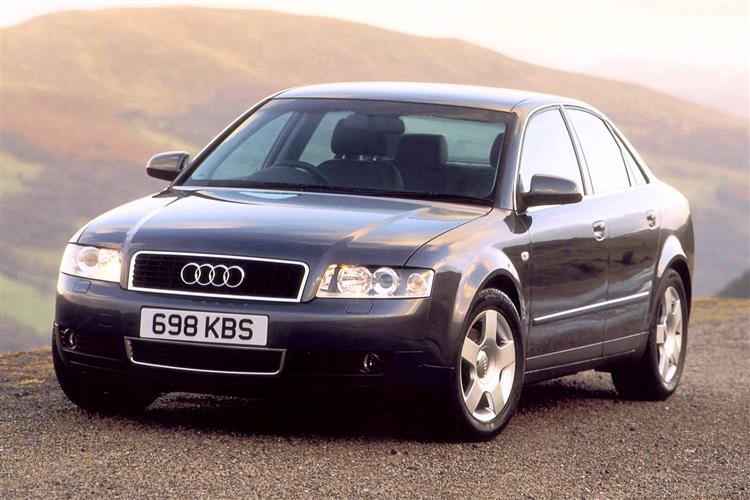