Fiat's Punto has been around for a while now and you can find a wide range of second-hand examples at many dealers. Sincethis is arguably the best small car the Italians have ever produced, that's good news for family buyers. Particularly since there's an exhaustive range of engines, bodystyles and trim levels.

To say that the Punto rescued Fiat in the UK is probably an over-statement, but the fact remains that since its introduction in early 1994, sales for the franchise have spiralled. Originally, there was a choice between 1.1, 1.2 and 1.6-litre petrol power (as well as a sporty 1.4-litre turbocharged unit) and 1.7-litre normally aspirated diesels soon followed. So did a 1.2-litre Selecta automatic (with belt-driven CVT transmission) and a six-speed manual version. A cheeky 1.6-litre cabriolet arrived at around the same time, followed a year later by a 1.6-litre 'warm hatch' called the 'Sporting'. A very mild facelift for the range in mid 1997 saw a new 1.2-litre 16-valve engine replace the old 1.6-litre unit, as well as very minor changes to the cars' appearance. The turbocharged GT model, for example, gained unusual black-painted alloy wheels, while body-coloured door mirrors were standardised across the range. An all-new Punto range was introduced in late 1999.

A uniquely styled, cleverly designed range of superminis offering an almost unrivalled variety of choice. You can have your Punto with turbo diesel economy or barnstorming petrol-powered turbo performance. You can have it with that novel belt-driven 'Selecta' automatic transmission or have fun swapping the cogs yourself with the six- (yes, six) speed gearbox. A three or five-door choice is standard with almost every model or, if that's not exciting enough, you can even have a cheeky-looking cabriolet version. Add to that a choice of four different petrol engines for the mainstream models and no fewer than five levels of trim over a wide, affordable price span. Plenty of options? You could say that. The idea is to put over the message loud and clear that just because you're buying an affordable small car, you don't have to compromise on style or luxury. Even the basic 75 SX for example, includes electric windows, a sunroof and a 4-speaker stereo. At first glance, the Punto looks like one of those design studies you get at motor shows which never quite make it to production. That Tardis-like, high-sided body, created for maximum roominess and versatility and minimum bulk. Those novel, high- mounted rear lights, raised and set either side of the tailgate glass where they can be more easily seen. Whether or not you like the overall effect, you have to hand it to Fiat (or more accurately to designer Giorgetto Giugiaro) for daring to be different. The Italian company has a long history of creating compact cars that others follow and the Punto continues it. In terms of practicality, this is the most effective small hatchback ever built. Why? Well, for a start, it's got so much space inside that you'd be forgiven for thinking that it competes against Ford Escorts and Vauxhall Astras rather than Vauxhall Corsas and Renault Clios. It doesn't of course; at just twelve-and-a-half feet long, you'll be able to slip in and out of supermarket spaces just as easily as you would in any other supermini. What you won't be able to do in any other supermini (contrary to what the sales people will tell you) is sit three adults comfortably in the back; you can in a Punto. They won't lack for head or elbowroom either - six footers step this way. There's even a huge boot. Even if you don't use the space, it all endows the cabin with a feeling of airiness that's quite unique in this class. 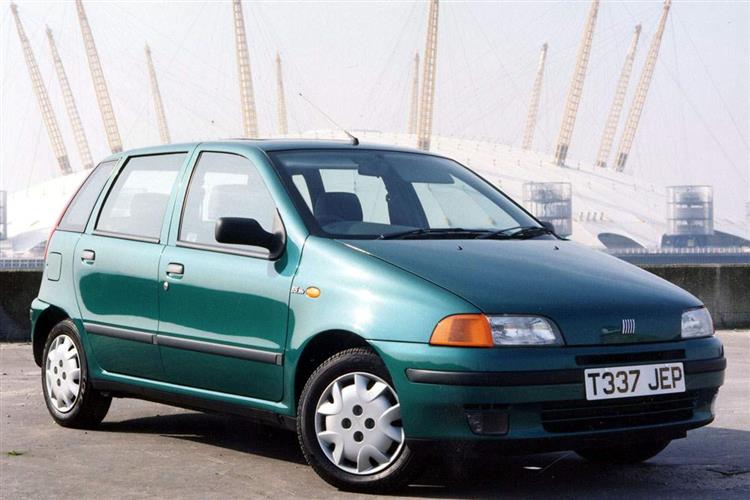