DRIVE THE CHEVY THROUGH THE LEVY (some text hidden)

How we laughed at the Chevrolet Blazer the first time General Motors tried to import it in the late seventies. Huge four-wheel drive vehicles would never catch on, we reckoned. 'Ideal for the profligate, slow-witted American mentality', sneered the motoring press of the time. How things change. You only have to venture out onto the roads of suburban Britain nowadays to encounter a bewildering array of leviathan 4x4s ploughing through the school run or the weekly shop. With fuel prices as they are, they make even less sense than before, but when did logic ever affect popularity? The Blazer's second coming has been a little more successful and it now makes an attractive used buy. Why settle for a Japanese slice of apple pie when the genuine article 'as cooked by the General in Detroit' is right here?

Okay, so in the authenticity stakes the Chevrolet Blazer lags a couple of notches behind a Jeep Wrangler, but you'll still feel the pioneer spirit the moment you get behind the wheel. Launched in the UK in January 1999, the V6-engined 4.3-litre Blazer was available in two basic formats, cloth-trimmed LS (in manual and automatic forms) and the luxury leather-lined automatic LT version. Available in the US since 1969, the Blazer has a long history of sales success, a history which counted for precisely nothing when the first right hand drive models were sold in the UK. Despite an attractive new price, sales of the big Chevy from the big country have always been modest to say the least and were discontinued completely early in 2002.

Owners of traditional big 4x4s don't seem to be the target market for the Blazer. Indeed, the figures suggest that, in Europe at least, most customers seem to pigeonhole this as a luxury car. In Germany for example, over 30% of buyers trade in a BMW or Mercedes. At 2.4 metres in length, it's about the same size as a large saloon but it's lofty driving position and soft set up make it feel vastly different. As you might expect for the money, all the luxury accoutrements are there too. All models come with central locking, electric windows and door mirrors, cruise control and a tilting steering column, along with eight-way heated and electrically adjustable front seats. A new six-speaker Bose sound system with CD player and power aerial is also included, as are headlamp washers, power folding mirrors, a leather-trimmed steering wheel and a digital compass. Once inside the cabin, there's not quite as much space as you might expect from a car of this size, though five adults can be accommodated comfortably. Sadly, unlike the Land Rover Discovery, there's no third row of seats to turn the car into an off road People Carrier. Compensation comes in the huge luggage area available - the largest in the class. There's up to 1056 litres if you flatten the split-folding rear seats. For what it's worth, our advice is not to think of this as any kind of luxury saloon. The Blazer is a tough, plush and affordable towing vehicle with plenty of gadgets and an image stronger than any of the Japanese competition. Choose one for those reasons and you'll enjoy owning it. 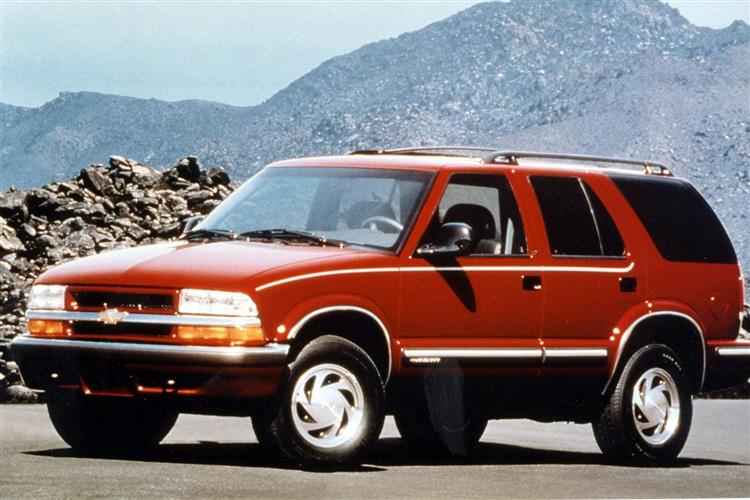