A TRIBUTE TO PRAGMATISM (some text hidden)

The Mazda Tribute is one of the best of the breed of compact 4x4s, a fact not generally recognised by its sales performance. Here is a vehicle that did practically everything you could reasonably demand of a small 4x4 and did it well, but which has been overlooked by British buyers. That may be down to a lack of promotion on Mazda's part. The Tribute's low-key approach may well have some justification. With Ford now owning a good proportion of Mazda, it will come as little surprise to learn that the Mazda Tribute and Ford Maverick are largely the same vehicle. Neither of these cars has exactly enjoyed a high profile. Why? Well, it could be something to do with the fact that Ford also own Land Rover, a premium product with big margins. If customers buy Tributes or Mavericks instead of Freelanders, the corporation's bottom line takes a hit. All of which is great news for the used buyer. Here's a car for which the asking price is relatively low, enjoys the benefits of major manufacturer development, has parts that are available all over the map and isn't exactly the same as what Joe Soap from up the road has on his driveway.

Unlike many of their compatriots, Mazda don't have much of a history in 4x4s, so when Ford proposed the joint venture, the Hiroshima company jumped at the chance to get a beach head in another market sector. First introduced to the UK in August 2001, the Tribute lagged behind its Ford cousin by a clear four months. We already knew what to expect, a Maverick with a Mazda grille tacked onto the front, right? Wrong. Mazda had a little trick up their sleeve. Unlike the Maverick, Mazda offered a budget front wheel drive version that continued a trend resurrected by the Honda HR-V that can be traced all the way back to cars like Talbot's Matra Rancho of the Seventies. 'Faux-by-fours' may be a harsh term for what is ostensibly a mini-MPV on stilts, and the front wheel drive 2.0GXi model was a tribute to Mazda's pragmatism, realising that these cars were often driven exclusively on tarmac. Alongside the 123bhp front wheel drive 2.0GXi version were the all wheel drive 2.0 GXi and a plusher GSi variant, with the range topper being the thirsty 196bhp 3.0-litre V6 Automatic. No diesel version was ever offered, limiting the Tribute's opportunities markedly. Final tributes were paid to the Tribute in early 2004.

The major market for cars like the Tribute remains the States, and the plastic slab of dashboard betrays the US-bias more than anything else, the column-mounted automatic gearbox on the 3.0-litre car being probably the least happy aspect of the vehicle, hunting between gears and with detents on the shift that make it difficult to just drop straight into Drive. It's also something of a shame that it's only possible to lock the Tribute into first, second and top (fourth) gear, as third would be the ideal gear to take advantage of the Tribute surprisingly agility. As we've alluded to, the interior, though well equipped, probably won't impress those with an eye for aesthetics. Everything works, seems well placed and well thought through, and yet feels drab, cheap and uninspiring. Interior space and luggage space is well up to the mark, the Tribute is longer than many rivals, evidence of which is instantly apparent the moment you throw the tailgate open. The rear seat is something of a shapeless bench, but the space available is excellent. The Tribute's exterior styling is a little sharper than Ford's Maverick, the beaky grille and shapely headlights making it look a good deal more modern. 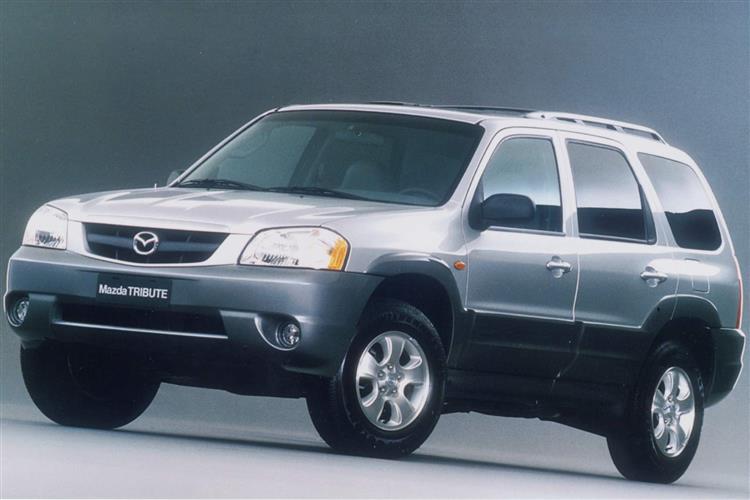