Mazda returned to a more conventional school of design with the latest generation of its 323. Whilst the previous 323 was undoubtedly adventurous with its coupe-like profile and range of engines that included a punchy V6, it was perhaps too quirky to be considered in the same breath as an Astra or a Focus. With used versions of the latest 323 now beginning to appear in reasonable numbers, has reining in the creative excesses of their designers made the little Mazda a good bet second time around? What it may lack in charisma it more than makes up in reliability and commonsense, making it a sound buy for those not looking for the last word in style or driver enjoyment.

Mazda certainly had a few rival motor manufacturers scratching their heads in confusion when they launched the 323F in 1989. Ford Escort rivals weren't supposed to have a swooping coupe-like roofline or sporty pop up headlamps. Whilst it sold in reasonable numbers, Mazda did it no favours with a policy of premium pricing. Its replacement, launched in 1994, followed the same principle of rakish looks, although the eighties-chic pop-up lamps were ditched in favour of squinting slot-like numbers. If the styling was slightly left field, the choice of a V6 engine developing 147bhp for the range-topper made it something of an oddity. Nevertheless, anyone who drove one felt that what it lacked in practicality it gained back in terms of exclusivity and performance. The latest 323 was unveiled in 1998, and again caught the car industry on the hop. Those expecting something bizarrely styled were amazed by the 323's staid appearance. Available at launch with a 75bhp 1.3-litre, a 1.5-litre unit developing 88bhp, or 113bhp 1.8-litre petrol options and a 2.0-litre 99bhp turbodiesel the 323 was mechanically conservative as well. Automatic versions of the 1.5-litre and 1.8-litre 323 appeared in February 1999, along with a limited edition run of 500 Shiraz versions with Wine Red Mica paintwork. Summer 1999 saw the launch of the obligatory sports variant, the warm 1.8 Sport, available in black and from the end of the year in silver as well. A high-spec midrange version, the 1.5-litre 323 GSE was introduced in January 2000. In June 2001, the line-up was facelifted and the 1.5-litre engine replaced by a punchier 1.6-litre unit, while the 1.8 was replaced by a 129bhp 2.0-litre engine. The Mazda 3 came along in 2004 and spelled the end of the long-running 323 series.

Under the skin, 40% of the 323's parts have been sourced either from the old model or the current 626. Since both of these cars were originally engineered for practical rather than performance purposes, that's largely what you get. Which may make Mazda's stated aim of attracting BMW 3 Series Touring customers more than a little ambitious. Perhaps a Nissan Almera would be a more attainable target. At the wheel, previous 323 owners will find the dashboard a big improvement, assuming they have no aversion to black and grey plastic. Better-quality materials and nicely laid-out controls come straight from the 626, as does the 'intelligent' air conditioning system, standard on every model. In fact, specification is a major 323 strongpoint, with all but the entry-level LXi models featuring ABS, traction control and an alarm immobiliser. Special editions apart, the value variant in the range is the 1.3 LXi, which offered a way into the 323 'family' for just under the psychologically significant £10,500 barrier. The plush 1.8 GSi and SE models add alloy wheels and the usual other electric niceties. Automatic transmission is available on 1.5GXi and 1.8GSi models. If you want a sporty feel to your 323, there are a couple of options. The first is provided by the mid-range GSE variant, priced at £12,735, which comes with the ordinary 1.5-litre engine but includes alloy wheels, roof rails, metallic paint and what Mazda call 'GT trim'. A more seriously sporting alternative is the 1.8-litre Sport, whilst for a bit extra on the flagship 1.8SE, you have the option of a sliding rear seat that pushes forward to increase boot space or backwards to improve legroom. I wouldn't bother. The sliding seats are less comfortable than the fixed ones and the extra height added by the mechanism reduces headroom for rear seat dwellers, already at a premium. In any case, the standard boot space is pretty reasonable at 354 litres and is extendable by split folding rear seats. Inside the cabin, there's 92mm more legroom front and rear than before, despite the fact that this car is 40mm shorter than its predecessor. The seats are supportive too, with a comfortable position easy to reach thanks to height-adjustment on the driver's seat. And safety? Well, Mazda seem to be getting the message in this respect. Seat belt pre-tensioners, side impact protection beams are all included as a matter of course. Twin front airbags are fitted to all but LXi models and the flagship 1.8SE also features side airbags. Otherwise, the recipe is much as before. In other words, the 323 is screwed together more tightly than Scrooge's wallet. All the controls are self-explanatory, if somewhat poorly laid out, and it won't take much recourse to the manual to quickly figure out what everything does. These are not the kind of character traits designed to warm the hearts of individualists. For everybody else however, Mazda's more conservative approach will probably mark a welcome change of direction. 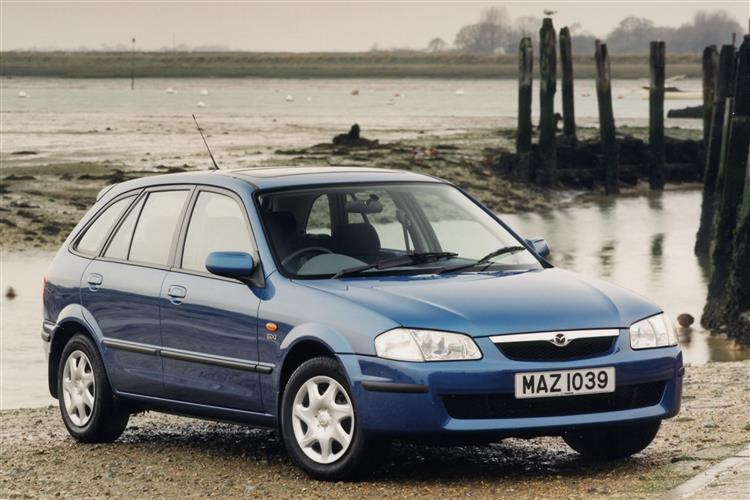