KING OF THE 'RING (some text hidden)

There are Porsche 911s and then there is the Porsche 911 GT3. Think of this car as distilling all the qualities that has made the 911 such an iconic sports car into one package and you're not far off the mark. Originally designed to be an ultra low volume special, demand for the GT3 was such that Porsche couldn't stop building them. Stroll around the paddock at the N??rburgring on a public day and the car parks will be thick with them, testament indeed to their rugged effectiveness. Here's what to look for if you're looking for a used example.

It's worth getting familiar with a little Porsche nomenclature before we dive into the history of the GT3. Back in 1973 Porsche launched the 911 2.7 RS (Renn Sport) starting a tradition of stripped out, lightweights 911s that were more at home on the track than the road. By the late Nineties, however, the Weissach company realised that there was demand for what was ostensibly a road car albeit with even sharper reactions than the standard 911. This formed the genesis of the GT3 and when it arrived, many were surprised that it was in fact 30kg heavier than the stock 911. But what a specification! With an engine based on the block of the GT1 racing car, and displacing 3.6-litres, the GT3 had lighter pistons, titanium conrods, dry sump lubrication and a cable-operated six-speed gearbox with interchangeable gear ratios for the racers. Lower by 30mm, sporting heftier brakes and wearing an aero bodykit, the 360bhp GT3 debuted in September 1999, priced at £76,150 - just over £11,000 more than a 911 Carrera 2. Demand was frantic and the GT3 was sold out almost before Porsche had officially announced its existence. The car continued to be built until late 2003 when the Mk II GT3 was launched. What changed? Apart from 21bhp of extra engine output, the engineers pointed towards things like beefier brakes with the option of ceramic brake discs and a more efficient aerodynamics package that reduced high speed lift. Moreover, the bodywork was derived from the stiffer 911 Carrera 4. Other changes included headlamps that were 911 Turbo style, distancing the car's front end from the cheaper Boxster model. The GT3 RS model was also introduced in 2003, a car for those who really want a car that feels as if it's escaped straight from parc ferme at Le Mans. Offered in white with either red or blue decals, the lightweight GT3 RS featured stiffer suspension, carbon fibre parts and a revised aero pack. It marked the final hurrah for the 996 generation of the 911 before it was replaced by the 997 series car in 2005.

What You Getword count: 151

Inside, there's more equipment than you might expect for what is essentially a car that will see a lot of track days. As well as the four airbags, you can expect to find power windows, central locking, grippy leather-trimmed sports seats, colour-keyed seat belts, a CD stereo and climate controlled air conditioning. High intensity bi-xenon headlight are an option but you'll search in vain for factory fit satellite navigation or a sunroof. Perhaps more surprisingly, there's also no sequential manual gearbox option with the kind of paddles behind the steering wheel that you'd find in, say, a Ferrari F430 F1. Ferrari, after all, say that many track day customers prefer this kind of transmission. Instead, there's a slick 6-speed manual 'box so perfect your heel and toe techniques. The GT3 RS cabin is even more focused and a good deal louder, vibrations from the engine resonating off the plastic rear screen. 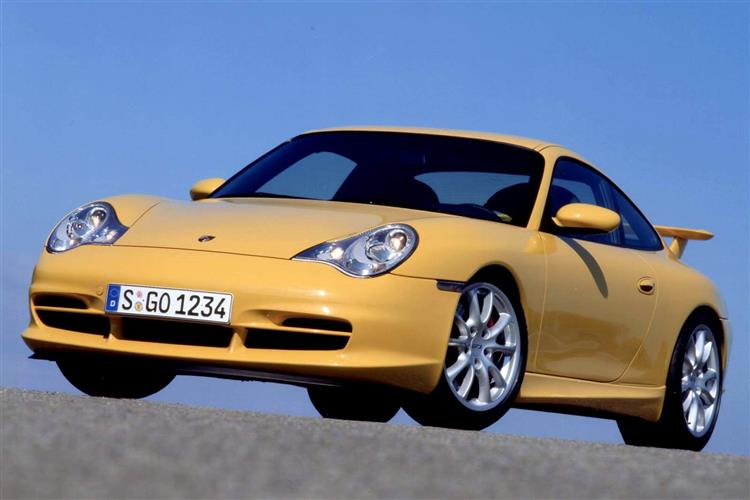