GERMAN FOR EXCELLENCE (some text hidden)

The Audi Cabriolet was one of those rare cars that found its second wind after a few years on sale, just like the Mazda MX5 did more recently. It arrived to a small audience of admirers, but its sales skyrocketed when a certain Princess (Diana) made one her personal transport. She and the car were filmed arriving at her gym, seemingly every night, on the evening news a few years back. For Audi, the publicity was worth a million TV commercials. It was a car that didn't really fit in with Audi's familiar Vorsprung durch Technik image. It had a relatively low count of technology (no quattro versions, for example) but what it did have was style with a capital 'S'. The mid-Nineties Diana-follower sales boom now means that well maintained examples are around in good numbers. For the used buyer, the choice has never been better.

The Cabriolet was released in May 1992 as a 2.3-litre five-cylinder manual-only car. It sold well and was joined a year later by a cheaper 2.0-litre four-cylinder version, the 2.0E. The '2.6E' arrived in December 1993 and replaced the 2.3E. The only update was the standard fitment of a driver's airbag across the range in July 1994. In May 1996, a new 2.8-litre V6 arrived and this car was called '2.8E'. A 1.8-litre version replaced the 2.0-litre in March 1997. This is the excellent 20-valve unit used in the A6 of the day, as well as other Audi models. There was also an equipment upgrade, with new alloy wheels, a 'Delta' radio unit, leather upholstery and a driver's airbag all being added. The bigger-engined cars also received new alloys (16-inch on the 2.6 and 17-inch for the 2.8-litre cabrio) as well as a computerised 'autocheck' system for both six-cylinder cars. 'Final Edition' cars were announced late in 1999, heralding the eventual end of the line for Audi's old-shape drop-top. Equipment worth up to £3,450 was added for a price increase of no more than £350. All these cars have a power-operated hood and the V6 has Nappa leather upholstery. Final examples of this model can be found on late 1999 plates.

What You Getword count: 46

A great-looking and very well built cruise-mobile. With the roof down, the Cabrio cuts quite a dash and the way the soft-top folds away out of sight adds to the elegant stance. Performance is good too, especially if you go for the 2.6 or 2.8-litre versions. 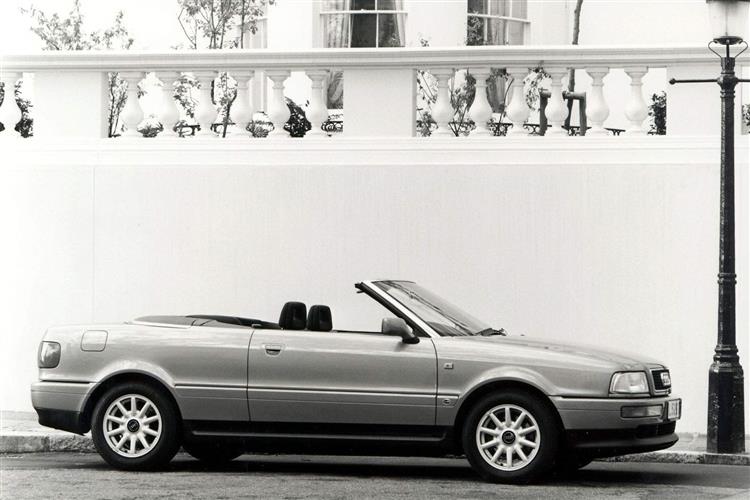