FOUR TO THE FLOOR (some text hidden)

Pragmatism hasn't always been a Porsche strong point. Take the 911 as a for instance. There are no solid engineering reasons for the engine to be slung out the back. It introduces all sorts of compromises and requires some fiendishly clever engineering to make work. When Porsche attempts to inject a bit of common sense into proceedings, as it did by fitting the 911 with four-wheel drive to handle its ever increasing power outputs and give it a modicum of all-weather ability, owners decried the Carrera 4 as unworthy to wear the badge. That was some time ago, and while Carrera 4s are still seen by many as lacking the purity of a rear-wheel drive 911, they do make cracking used buys. Here we take a look at the merits of the 996-series Carrera 4, produced between 1998 and 2005.

The 996 generation car was very much the model that hauled the Porsche 911 into the modern era. Porsche's R&D Chief, Horst Marchart, realised that the 911 had to attract customers who used to be attracted to the Porsche 928 and Mercedes SL, whilst at the same time being able to see off the sort of sports cars 911s traditionally ate for breakfast - cars such as the Honda NSX and Lotus Esprit V8. At the same time, the car needed to exhilarate but divest itself of the hedge-sniffing image of earlier cars. The first 996 series cars arrived on our shores in October 1997, in rear-wheel drive Carrera 2 form at least. Porsche waited for the die-hards to get their knickers untwisted about the move from air to liquid cooling for the trademark flat-six engines and then launched the 3.4-litre Carrera 4 in October 1998. Coupe, convertible, manual and Tiptronic S variants were offered. To celebrate the turn of the millennium, Porsche launched the imaginatively titled '911 Carrera 4 Millennium Coupe' in December 1999. Boasting violet chroma-flare 'flip' paint, lowered suspension, 18-inch Turbo-look wheels and a full leather interior in a colour reminiscent of toffee, the Millennium is a rare sight on British roads. 2001 saw a revision of the 911 Carrera 4 range, with turbo-look headlamps, revised steering and suspension, some interior upgrades, but most importantly of all, a 3.6-litre engine which developed 320bhp. The cabrio version's hood was amended and it also gained a glass rear window. The Targa version was also revived, but this time around it was a sleek thing with an electrically sliding glass roof and an opening rear window. A Carrera 4S model with turbo style wide arches debuted in November 2001 and in summer 2003 a 4S Cabriolet model was released.

The 996 is a far bigger car than its 993 predecessor and a good deal more practical as a result. The design was closer related to the Boxster than the previous shape 911: over 40% of the componentry is shared. You notice this most of all inside, where the previous haphazard array of knobs and switches were replaced with the Boxster's far more cohesive layout. There's more cabin space too - but don't let this lull you into thinking of the new 911 as a realistic four-seater. It isn't. The front boot's bigger too, but you can't fit more than two bags in it and you'll need to watch out when closing it so as not to dent the bonnet on protruding items. Antilock brakes and twin front airbags are included, although side bags and the excellent Porsche Stability Management electronics are extra. The Convertible features automatic roll-over protection and there are proportionately more Carrera 4 drop tops around than rear wheel drive models. Certain design cues remain; the slab sided dashboard and simple switchgear, and that Weissach crest staring at you from the steering wheel let you know that you're about to get a return on the millions Porsche have invested in research and development. 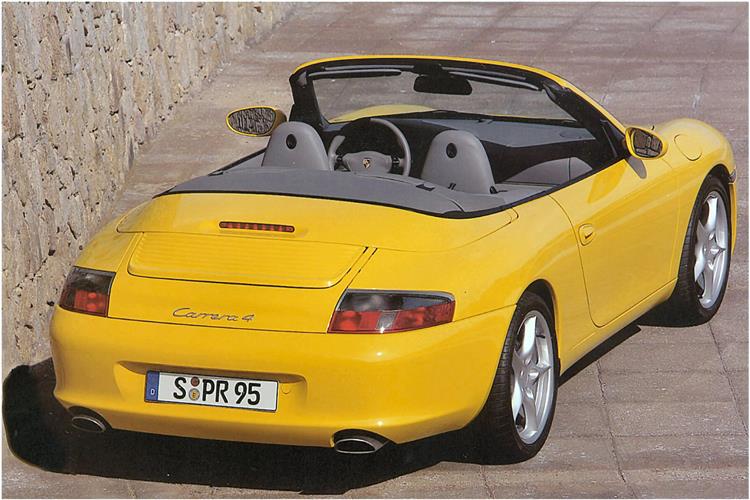