RX IN EFFECT (some text hidden)

Generally held to be the most beautiful car ever to hail from the Land Of The Rising Sun, the Mazda RX7 could delight and frustrate in equal measures. Here is a car that is stunning to look at, electrifying to drive, agreeably rare, relatively affordable to buy, yet is horrendously thirsty and fiendishly complex mechanically. As the final custodians of the rotary engine concept, the Mazda RX series had its highs and lows. This last RX to be sold here was Mazda's way of going out with a bang. Unless you want similar pyrotechnics from your used RX7, pay close attention.

The formula for new car development goes something like this. Successive generations get bigger, heavier and more upmarket until somebody stands up and has the courage to tell the emperor that he's up for an indecency charge. At Mazda that man was Takahura Kobayakawa, who demonstrated his disgust at the way Mazda's 2nd generation RX7 had developed by lapping the Miyoshi test track quicker in a 14bhp kids go-kart. Mazda's senior management finally saw the error of their ways and gave Kobayakawa license to work on the 3rd generation car, with a philosophy of light weight and keen handling. Smaller, lighter and more powerful than the outgoing generation, the 3rd generation Mazda RX7 first arrived in the UK in July 1992, priced at £33,999, within a hairs breadth of its chief rival, the Porsche 968. The Weissach company was about to spring a rude surprise on the boys from Hiroshima though, soon afterwards introducing the now almost legendary Porsche 968 Club Sport for just £28,975. In early 1993, Mazda's response to weak UK sales was to slash £1,500 from the list price and boost the spec with the fitment of an airbag, but still sales were haemorrhaging. It was then that Mazda decided on an extraordinary course of action, knocking £6,500 off the list price. The £25,950 RX7 was something of a bargain, but any goodwill Mazda hoped to accrue was drowned beneath the howls of anguish from the owners who had thought that £1,500 off was a good deal. Resale values fell through the floor and Mazda ended up paying compensation to disgruntled owners who felt that Mazda had deliberately misled them over pricing. The price crept steadily back up to £35,950 at the time of the car's withdrawal from sale due to increasingly stringent emission and noise regulations in 1995. Development of the RX7 continued apace in Japan, with the Type RS version still finding customers in 2002. The RX-8 replaced the much loved RX-7 range in early 2003.

Were it not for Porsche's 968 Club Sport, the Mazda RX7 would be remembered as the best handling sports coupe of its generation. Little since is able to touch it as a driver's car. As an ownership proposition, the Mazda was uncompromising and high maintenance. Buoyed by the success of Johnny Herbert in a Mazda at Le Mans in 1991, the UK-spec RX7 was designed as a sports car with the emphasis on driving thrills, but many were sold purely on the strength of their looks. With concealed door handles long before the Alfa 156 ever hit the drawing board, voluptuous curves, that elegant sweep of the door line and a cab-back profile that emphasised bonnet without looking overtly 'chestwig', the RX7 was, and is, a dazzler. The bodywork appears to have melted over the car, its fluidity punctuated with scoops, dams and spoilers with just the right amount of aggression. Aftermarket 'specials' show just how right Mazda got it. The other key talking point was, of course, that rotary engine. Few customers either understood or trusted the Wankel unit, bearing as it did a reputation both for rotor tip wear and prodigious thirst. Mated to twin sequential turbochargers (as seen in the Porsche 959) the Mazda was a sophisticated piece of kit. This deterred many buyers who saw the big, honest four-cylinder engine of the Porsche 968 as something that would be less of a worry. By and large they were right. The interior of the RX7 fails to match the visual drama of the bodywork, but it nevertheless feels like a great place to drive quickly. The driver is faced by an old-school fascia with chrome bezels lifting the otherwise unremitting black theme. Other clues to the RX7's sporting intent are the tiny gear lever, the drilled aluminium pedal set and the lightweight sports seats. Visibility is pretty good and this helps reduce the intimidation factor, making the RX7 a truly useable sports car. 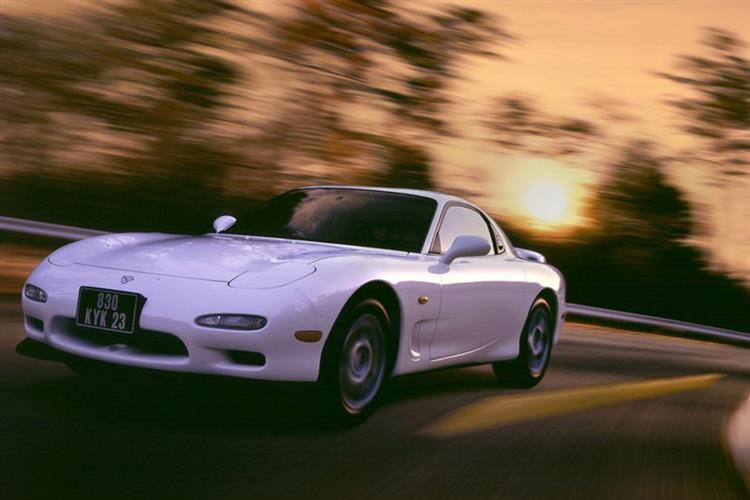