Convertibles are, by their very nature, love it or hate it kinds of vehicles and on the used market, their polarising effects can be multiplied. Mazda's MX-5 roadster has always done a creditable job of attracting those who fall into the 'love it' camp with its sparkling driving experience and affordability but people who prefer to be insulated from the elements by something more substantial than a few millimetres of material routinely gave it the cold shoulder. Mazda's answer was the Roadster Coupe, a version of the MX-5 with a folding hardtop roof. At a stroke, it made Mazda's little sports car more appealing to drop-top doubters and as a used buy, it's perceived as a more substantial proposition than the soft top.

The third generation Mazda MX-5 model debuted in September 2005 and although it was a little bigger and heavier than previous generations, the styling rejuvenated the car, bringing a little more edginess to proceedings. The introduction in September 2006 of the Roadster-Coupe model with the folding hard top roof further broadened the appeal to customers who wanted the handling of the MX-5 but weren't enamoured of a fabric roof. Offered with the same 1.8 and 2.0-litre petrol engines as the standard models, the Roadster Coupe presented MX-5 buyers with a straight choice - soft-top or not.

The Roadster Coupe's powered folding roof retracts in three sections with no impact on boot space and adds just 37kg to the weight of an equivalent soft top MX-5 roadster. Raise the roof and it sits a mere centimetre taller than its fabric-trimmed sibling. In short, the arrangement isn't overly intrusive. Although it's tempting to think of this car as 'just a roof', a lot of thought clearly went into it. The spring and damper settings were subtly revised to take account of the hard top car's marginally altered weight distribution. Thankfully, the roof retracts to a position within the wheelbase of the car so that it doesn't detract too markedly from handling agility. That said, Mazda concentrated on giving this MX-5 a smoother and milder road feel, targeting it at those who value refinement. Park the Roadster Coupe and the MX-5 soft top next to each other and it's possible to see the subtle way in which Mazda has teased out the shape to accommodate the folding roof. The rear deck of the car sits 40mm higher at the rear window line and 20mm higher at the trailing edge of the boot, giving it a slightly more hunched and powerful look than the soft top. It's really a very minor change and tough to discern in isolation. Whereas the average duration for a roof operation of this kind tends to be around 22 seconds, Mazda whittled that time back to a mere 12 seconds for the MX-5 Roadster Coupe, making it the fastest folding hard top in the world at the time of its launch. The driver must unlatch a centre lock and then press a button to operate the roof but it can easily be done while waiting at lights. The roof itself is composed of three panels; a front roof section, a middle roof part and a window assembly. Highly formable yet stiff plastics were required to keep weight low and durability high. 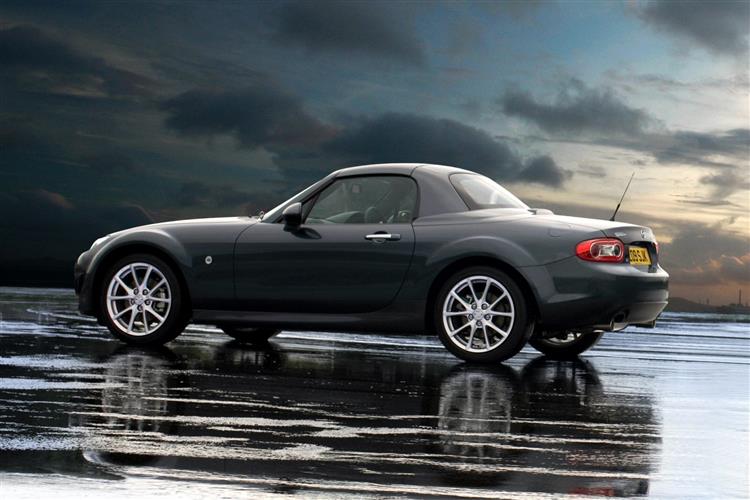