PLUG AND PLAY (some text hidden)

If you're set on the smart second generation version of the Range Rover Evoque and you'd like an alternative to diesel power, we'd recommend the PHEV Plug-in P300e model over the conventional petrol variants. This mates a three-cylinder 1.5-litre petrol unit putting out 197hp with a 107hp electric motor and can offer an electric driving range of up to 41 miles, with CO2 emissions of just 32g/km. As with all plug-ins, there's an inevitable price premium to pay for the extra technology but there are no compromises in passenger space and you get all the same off road ability as with the standard car.

It seems a long time ago now that the Range Rover Evoque rather lagged behind its lifestyle premium SUV rivals when it came to engineering tech. The MK2 model was launched in 2019 with mild hybrid electrification built into most of its four cylinder 2.0-litre Ingenium petrol and diesel engines. And built upon a new 'PTA' ('Premium Transverse Architecture') platform designed to also allow for plug-in hybrid (though curiously, not full-EV) technology. It's the Plug-in hybrid version of the Evoque we look at here. The Solihull maker's existing Ingenium four cylinder 2.0-litre petrol unit was too old to be converted to a PHEV format, so a completely fresh three cylinder 1.5-litre Ingenium turbo petrol engine had to be created for it. A huge engineering effort's gone in to bring this variant to market. How does it stack up?

Mated to an eight-speed auto gearbox, this model's three cylinder 1.5-litre engine puts out 197bhp, its efforts further aided by a 107bhp electric motor mounted on the rear axle which delivers AWD capability and creates a total system output of 296bhp, with 540Nm of torque. The electric motor is powered by a 15kWh lithium-ion rechargeable battery pack. The Evoque PHEV is the quickest variant in the line-up, able to manage 62mph from rest in just 6.1s and reach 84mph on electric power alone. Above this speed, the electric motor is decoupled to reduce drag and the car reverts to front wheel drive. Obviously, if you use this model's reserves of performance too often, you'll very quickly deplete the all-electric driving range, WLTP-rated at 41 miles. The 1.5-litre engine has been designed with an optimised exhaust gas flow system which improves turbo response and Land Rover claims that there's no refinement downside with the switch to a three cylinder format. Finally, the brand reckons that the PHEV system's seamless control between the front and rear axles makes this plug-in variant even better than a conventional model off the beaten track. Certainly, you'll damage any direct rival if you attempt to take it anywhere near what this little Range Rover can do 'off piste'. That's thanks to 212mm of ground clearance, 600mm of wading depth capability and an evolved 'Terrain Response 2' driving mode system which sets the car up perfectly for the type of ground you're travelling over. 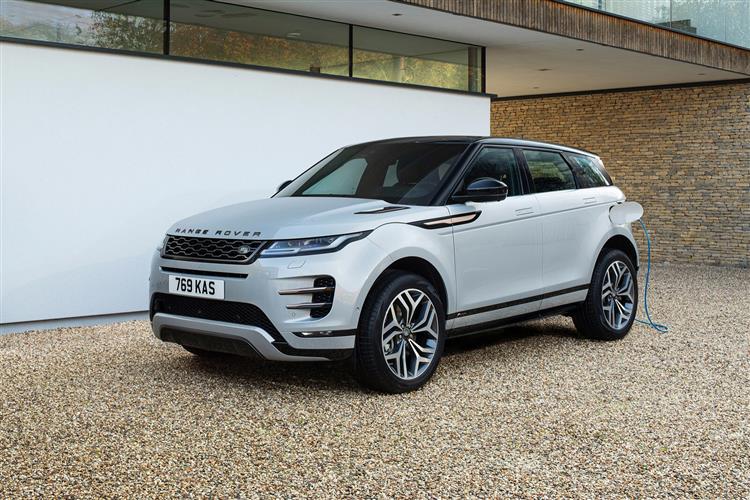